Global overpopulation has recently returned to the public spotlight with the publication of Inferno, the latest offering from novelist Dan Brown, author of the 2003 blockbuster The Da Vinci Code. A mystery thriller on the surface, Inferno is ultimately a piece of demographic fiction. As one reviewer notes, “The specter of a catastrophically overpopulated Earth, its desperate people grasping and clawing for diminishing resources, looms large over the novel. It’s a scene that evokes all the pain and suffering of Dante Alighieri’s vision of hell in “The Divine Comedy.” Brown himself stresses his Malthusian vision, noting in an interview that “Futurists don’t consider overpopulation one of the issues of the future. They consider it the issue of the future.” As is true of The Da Vinci Code, Inferno is striking hostile to the Roman Catholic Church, attacking it for its opposition to contraception and family planning. Taking on the Catholic Church has evidently not hurt sales; to the contrary, some reviewers almost seem to regard it as a marketing ploy. According to the Daily Mail, “The Da Vinci Code offended the Vatican, and was denounced by the Pope. What better publicity could an author hope for?”

Brown’s extraordinary popularity—with books sales of more than 200 million—seems to attract excessive criticism. According to the Belfast Times, his treatment at the hands of critics has been nothing less than “hellish.” Melbourne’s Herald Sun, for example, tells us that “Dan Brown Is Back, As Bad as Ever.” Many of the harsh reviews of Inferno focus on factual errors, some of which are rather petty. The Daily Beast, for example,  “fact-checks” the book and finds 10 significant “Mistakes, False Statements, and Oversimplifications.” A typical example runs as follows:

After hyping up the brains of heroine Dr. Sienna Brooks, with her enormous IQ of 208 (Stephen Hawking only scored 200) and her various degrees, Brown then presents her as unfamiliar with Venetian Carnival plague-doctor masks. Anyone who has been to Venice, or even watched a Travel Channel documentary about Venice, will know of them. 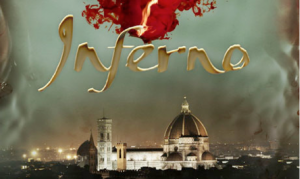 But despite the unforgiving nature of the criticism, Brown’s central concern—that of human overpopulation threatening to overwhelm the planet—has gone almost unnoted. Evidently, this scenario seems reasonable to most reviewers. It is not. Fertility rates are declining if not plummeting almost everywhere, and have already gone below the replacement rate across much of the so-called Third World. After a few billion more people are added, a plateau will be reached and then a gradual fall will likely commence.

Brown’s more specific charges against the Roman Catholic Church are also problematic. Certainly one can object to the Church’s stance on contraception and family planning, but the fact remains that a minority of Catholics actually follow such teachings. Most primarily Catholic countries have birthrates close to or below the replacement level. Exceptions certainly exist, such as East Timor, the Philippines, and Guatemala. Many Catholic areas in Africa, moreover, have very high fertility levels. In Europe, however, the traditionally Catholic countries, except France and Ireland, have substantially lower birthrates than the historically Lutheran Nordic countries. Several Latin American countries of Catholic heritage have lower birthrates than the heavily Protestant areas of the United States. 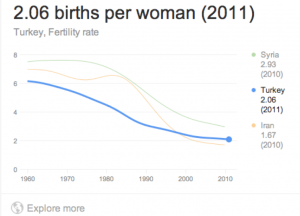 As the reactions to Inferno make clear, an impending population catastrophe remains ingrained in the public imagination. As noted in the previous post on this issue, my own students substantially overestimated fertility rates across India. They also seem to find the idea of a global population explosion difficult to shake. After quizzing them on India’s birthrate a few weeks ago, I showed them fertility-rate maps of both South Asia and the world at large. Last Friday, I quizzed them again, this time on the demographic situations of Iran and Turkey. The image posted here shows my question, the response from the class, and the correct answer. As can be seen, most students expected  higher birthrates in these countries than they actually have.

As it turns out, Iran has experienced one of the world’s most precipitous birthrate declines, its total fertility rate falling from 6.52 in 1982 to 1.67 in 2010. This drop has led the Iranian government to another u-turn in family planning; the pro-natalist policy initiated after the Islamic Revolution of 1979 was replaced by a family-planning agenda in 1989, but now large families are again encouraged. According to a recent article in the International Business Times:

Teheran officials, who have spearheaded a door-to-door campaign to spread a health education propaganda drive, want to spark a baby boom that would double the Iranian population to about 150 million. The Daily Telegraph reported that no less than 150,000 health workers have mobilized for the ambitious project, literally knocking on the doors of homes to encourage single-child families to have more offspring.

The fertility decline in Turkey has not been as steep as that of Iran, but it has been steady, the total fertility rate falling from 4.57 in 1979 to 2.06 in 2011. As in Iran, the country’s government is not pleased. As recently reported in Al-Monitor:

Himself a father of four, [Turkish Prime Minister Recep] Erdogan has urged married couples to have at least three children, pushing his message bluntly on every platform — from casual chats and wedding ceremonies to party meetings and diplomatic occasions. Arguing that a larger, youthful population will help propel Turkey into the world’s top 10 economies, he has vilified past policies of “family planning” and made bizarre warnings of plots “to wipe the Turkish nation off the global stage.” Recently, he has upped the bar even higher, calling for four or five children. 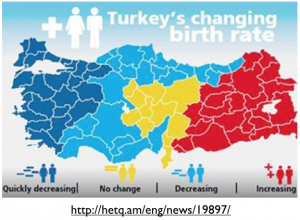 One of the reasons why Erdogan is so concerned about the Turkish fertility decline is its geographical imbalance. In the more prosperous western regions of the country, the fertility rate is now roughly 1.5 and falling, whereas in the Kurdish-speaking southeast it is roughly 3.5 and perhaps rising. As recently reported in International Business Times:

Thus, Turkey is facing a demographic time bomb — Kurds, who tend to be concentrated in the country’s impoverished southeast and are generally poorer and less educated — could conceivably outnumber Turks within about 30 years should present patterns persist.

Despite the dreams and plans of the Turkish and Iranian government, it seems highly unlikely that pro-natalist policies will result in a return to the high birth-rates of the past.