When teaching population geography, I always discuss urbanization rates. Perceptive students sometime ask about the official statistics that I use, wanting to know how “urban” is defined. When I tell them that that U.S. Census Bureau classifies all settlements with a population of 2,500 or more as urban, they look surprised and sometimes question the designation. That threshold, selected in 1910, seems far too low, not fitting the current concept of urban settlement. 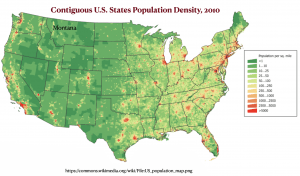 Eastern Montana is a good place to examine the mismatch between the official designation and the popular view of what constitutes an urban place. As can be seen on the map posted here, the eastern quarter of the state is one of the most sparsely populated parts of the contiguous United 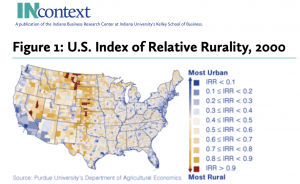 States, with most census tracks having fewer than one person per square mile. A Purdue University study gave most of the counties in the region a high “relative rurality score.” A more recent U.S. Census 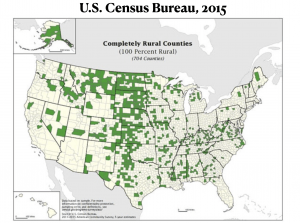 report classifies most counties in eastern 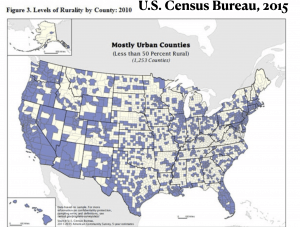 Montana as “100 per cent rural.” Yet the same report also placed four of the region’s counties in the “mostly urban” category. It did so because most of their residents live in the county seats, 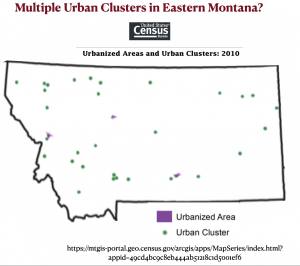 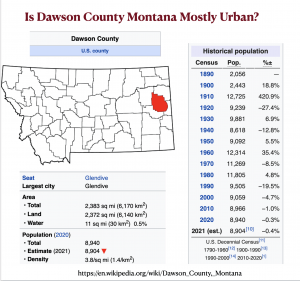 One of these counties is Dawson, a sparsely settled place with only 3.4 people per square mile (1.4/km2) and fewer than ten thousand total residents. But more half of them live in Glendive (population 4,873) and adjacent West Glendive (population 1,998). This distributional pattern 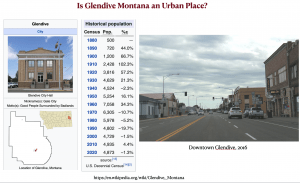 makes Dawson a “mostly urban” county, at least according to the Census Bureau.

It is probably safe to say that most observers would reject the idea that the small and declining town of Glendive constitutes an “urban cluster,” as it is designated by the Census Bureau. But that does not mean that it is rural place. Intermediate terms are needed. Fortunately, several exist, including “suburb,” “exurb,” and “small town.” Glendive clearly fits the latter category. As a typical small American town, it shows far greater 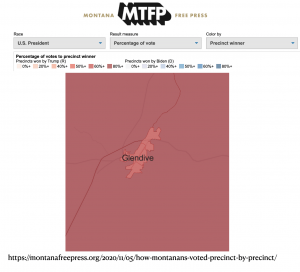 cultural affinity with rural areas than it does with urban ones. It does not, for example, exhibit anything like an urban voting pattern. In 2020, Glendive gave roughly 70 percent of its votes to Donald Trump. But as can be seen in the map posted here, a minor urban effect is visible: rural areas of Dawson County gave Trump more than 80 percent of their votes.

In 1910, when the urbanization rate in the United States stood at only 45.6 percent (with Montana recording 35.5 percent), it made sense to classify small towns as urban places. It no longer does. Depicting Dawson County now as “mostly urban” is misleading, based on an antiquated classification system.