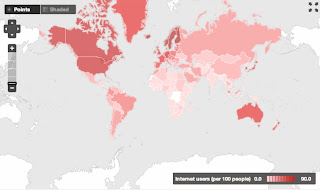 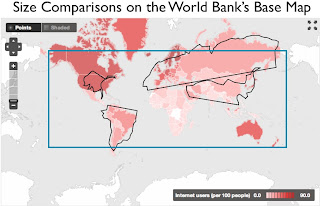 The World Bank provides global data on many issues other than the “ease of doing business.” The Bank’s website offers a treasure-trove of statistics on wide array of topics. All data is mapped out by country, providing a virtual atlas of world development. Whether the data are accurate and the maps illustrative are different matters. Although the Bank trumpets the quality of its information, there are good reasons to remain guarded, as we saw last week with the Business Index. When it comes to the World Bank’s cartography, there is no doubt whatsoever: the maps are so bad as to be amusing. They distort the word just as a fun-house mirror distorts a human body, grotesquely shrinking one part and magnifying another. As a result, they are as useful for depicting geographical patterns as sideshow mirrors are for personal grooming.

I selected “Internet Users (Per 100 People)” for no particular reason; all of the cartography on the Bank’s website uses the same base map and hence looks much the same. The signal flaw is the selection of the Mercator projection, which grossly exaggerates the area of the high latitudes. Not that there is anything wrong with the Mercator projection per se; it is actually a brilliant and practical devise, generating the only maps on which a constant compass bearing can be plotted as a straight line. Gerardus Mercator devised the projection in 1569 for navigational uses, never intending that it would be used for general-purpose maps. I can only imagine that he would be horrified at the way his eponymous map is misused today.

Leftist scholars have long criticized the Mercator projection for exaggerating the size of Europe relative to the tropical realm. One would have no idea from examining the map, for example, that DR Congo is roughly ten times the size of Britain. From the perspective of the academic left, the Mercator projection is Exhibit A in the charge of Eurocentrism that it levels against the Western mapping tradition.

Such charges of cartography bigotry may convey an element of truth, but they are greatly overdrawn. The Mercator projection inflates the size of northern Russia and Greenland much more than it does that of Western Europe, yet no one has made accusations of “Russo-Greenlandic-centrism.” If anything, the World Bank is Antarctocentric; its magnification of Antarctica is extreme, as most Mercator maps of the world cut off at 75 degrees south latitude or so, thus excluding much of the polar continent. The World Bank makes no such an allowance. As the second map posted above shows, it portrays Antarctica as roughly the same size as Eurasia, Greenland as larger than South America, and Alaska about two-thirds the size of the contiguous United States.

The use of the Mercator projection is the most glaring problem with the map, but many others can be found. Why do eastern Eurasia, Australia, and New Zealand appear twice? Such duplication, along with the Mercator distortions, reduces the area that actually carries information – the part inside the blue rectangle – to less than half of the map. Why, we might also ask, is extreme eastern Siberia apparently appended to North America? (Note how even Wrangel Island is divided, half of it colored on one side of the map, the other half colored on the other side.) Why are French Guiana and Reunion not mapped with France, even though they are as much parts of France as Hawaii and Alaska are parts of the United States? Why are the areas disputed between India and China unmapped, unlike all other disputed regions? Why do the data tables used to make the map claim to cover “countries,” yet actually includes a number of non-sovereign entities that are almost never so classified? (Or, to put it in other worlds, why are New Caledonia and Puerto Rico mapped as if they were countries, but not American Samoa or French Polynesia?) Why are Russia’s arctic islands mapped with Russia, while Norway’s Svalbard is left blank? In all cases, no information is provided about such maneuvers, and no sense is made.

Why does the World Bank deploy such monstrous maps? I suspect the main reason is one of simple geographical illiteracy. The Bank hires competent statisticians and computer programmers, but they evidently know little about the world, and virtually nothing of cartography. Higher-level employees at the Bank are either equally clueless or simply do not care that their organization grotesquely misrepresents the world.

All such problems pertain to the World Bank’s base map, used to depict all of its data. In regard to the internet map posted above, questions can also be raised about both the reliability of the data and their cartographic portrayal, as will be explored in the next Geocurrents posting.