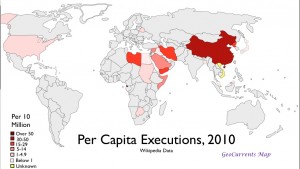 Capital punishment has featured prominently in the global news in recent weeks, due both to the execution of Troy Davis in Georgia and to the scheduled hanging of three men in India convicted of killing prime minister Rajiv Gandhi in 1991. One reason for this attention is the relative rarity of the death penalty. Many countries have eliminated the practice, as is shown in the second map posted here. More to the point, many countries that allow executions rarely if ever carry them out. As the first map shows, only a handful of states conducted executions in 2010. The vast majority occurred in China, which may have killed as many as 5,000 persons. In per capita terms, however, oil-rich and notoriously corrupt Equatorial Guinea led the pack. 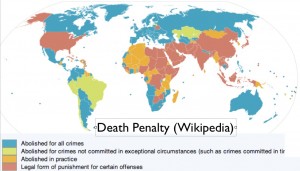 Countries practicing capital punishment are concentrated in East Asia, the Middle East, and northeast Africa. The United States is an extreme outlier: the only country in the Western Hemisphere to have carried out executions in 2010.

Many American news organizations are highly critical of capital punishment. Yet on October 4, 2011, the New York Times lauded a death penalty sentence. Under the heading “Justice in Pakistan,” it argued that the slated execution of Malik Mumtaz Qadri presents a “rare glimmer of hope” for the troubled country. Qadri was convicted of murdering Salman Taseer, the governor of Punjab province and a prominent critic of Pakistan’s draconian blasphemy laws.