The Census of Marine Life, is the major international oceanographic research project involving researchers in over 80 countries, who tagged more than 120,000 types of species & millions of organisms over the past decade.

The project is now revealing their findings for the 2010 calendar year. This has served to create the first world oceanographic census, a baseline for scientific comparison. Check this video, for an eloquent and dizzying introduction the project. 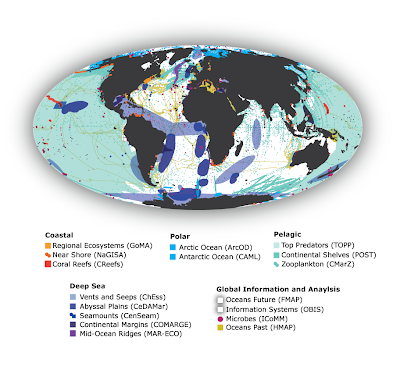 A peek at this series of maps, entitled ‘Footprints’, shows in an instant the unprecedented breadth of the study.

Throughout the course of the census, thousands of new species of ocean life have been discovered, with millions of individual organisms catalogued & counted.

Thousands of smaller, specific studies have formed the core of this oceanographic census. The sum of the results from wave height & oceanic topography censors, studies on human impacts on oceanic ecosystems, projections from the International Census of Marine Microbes, and more work to paint the most complete portraiture of the ocean possible thus far.

One of the finest, and most widespread contributions from the CoML project, is built in to the Ocean’s feature, in the layers panel of Google Earth 5. 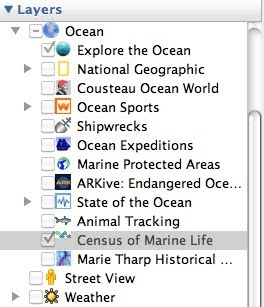 Activating the census of marine life tab in Google Earth gives access to the findings, photos, and information from over 130 waypoints cataloguing a variety of fieldwork performed throughout the census.

The census is still taking submissions from their own oceanographers & researchers, and adding more stories from the project to Google Earth.

Quite frankly, this is close to the human genome project of Oceanography, in terms of scope and ambition. The Census of Marine Life has provided GIS geeks, Young Cousteauists, and Marine Researches with enough data to sift through for lifetimes. The project has even inspired a following amongst artists.

And yet, this is only one, small, oft-unchecked box in Google Earth. Rather humbling to think about, and definitely worthy of admiration, awe, and respect.

What’s even more awe-inspiring, is that there remain millions of miles to be tagged, and thousands of species still undiscovered.

Here at GeoCurrents we’d like to give a special thanks to the Census of Marine life, for providing layers of data as deep as the Mariana Trench. 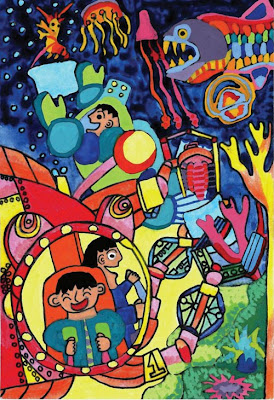 (Art by Daichi Fujita, winner of a Census of Marine Life Art Contest, and a deep sea ROV tour)