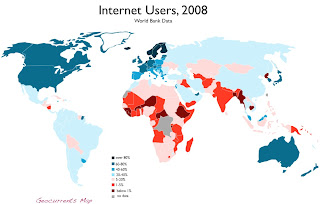 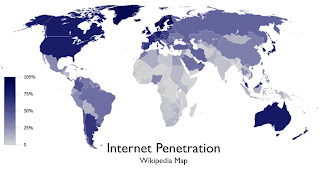 The World Bank’s map of internet penetration, discussed Monday, has a number of awkward features. Beyond the problems analyzed earlier, it poorly conveys the vast disparities indicated by its own data. According to the World Bank, the percentage of the population using the internet in 2008 varied from over 90 in Iceland to 0.2 in Burma and 0.0 in North Korea. I have accordingly mapped the same data to accentuate the difference between networked and non-networked countries, using two color gradients, blue for the upper end, red for the lower. The twenty percent cut-off point for blue, used to spatially balance the two colors, may be misleading, however, as it risks exaggerating the spread of the internet. Such difficulties are inherent in this kind of mapping.

Such niceties, however, do not address data accuracy. Here, I am again suspicious. According to the World Bank, Chad is four times more internet-connected than Bangladesh, with penetration rates of 1.2 percent and 0.3 percent respectively. It also claims that Jamaica (57.3 percent) has a much higher internet access rate than Argentina (28.1 percent) and even Italy (42.8). Such figures are not credible.

More recent (2010) data are provided by Internet World Stats, which is used by the Wikipedia to create its own map of internet penetration (reproduced above). This data set has fewer oddities; Argentina’s rate of use, for example, surpasses that of Jamaica. But it still pegs Bangladesh at a negligible 0.4 percent, and India (6.9 percent) below several less technologically sophisticated countries, including Haiti (10.4 percent) and The Gambia (7.1 percent). I remain skeptical.

Measuring internet penetration is more difficult than it might seem at first glance. How does one take into account, for example, the sharing of access with friends and family, a practice common in much of South Asia? Internet use through cell phones adds another layer of complexity. In Jamaica, high penetration figures are derived almost entirely through cell-phone subscribers. Such assessments do not seem to apply to Bangladesh. According to Internet World Stats, the internet-using community in Bangladesh is quite restrictive, limited to the country’s Facebook community: the organization’s fact sheets tell us that Bangladesh had 995,560 internet users as of August 2010 and exactly 995,560 Facebook users. Everyone in Bangladesh who has access to the internet has a Facebook account? Quite an extraordinary claim! Intriguing that the same site tells us that China had 420,000,000 internet users as of June 2010, but only 24,060 Facebook subscribers. Something fishy is obviously going on in the world of internet statistics.