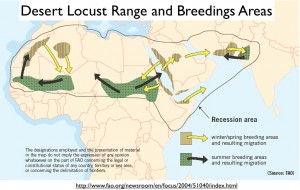 The recent GeoCurrents post on California cuisine ended on the odd note of insect eating. Of all insects across the world, locusts are probably the most widely consumed. They are the only six-legged creatures considered halal by Muslims and kosher by Jews. Allowing the consumption of locusts may have had an ecological rationale; when they swarm, crops can be devastated, yet hunger can be partially assuaged by eating the nutritious agents of destruction. 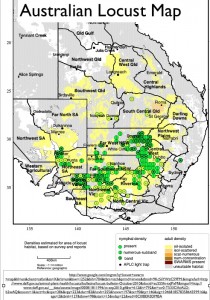 Many mysteries surround the locust, as swarms come and go in baffling patterns. As outbreaks are costly, considerable funds are devoted to understanding and predicting their formation and movement. As with hazardous weather prediction, cartography plays a major role. Maps typically show areas in which non-flying nymphs are aggregating, as well as incipient and actual swarms. Australia’s extensive locust control program relies heavily on crowd-sourced maps. The U.N.’s “Locust Watch Program” (part of the FAO) also does an admirable job. Its February 2012 map of the Libyan-Algerian border region, posted here, shows the potential for later swarming later this year.

The locust is not a single kind of insect but rather a general name for several grasshopper species whose bodies and behaviors change when they become so numerous on the ground that they start bumping into each other. In normal conditions, locusts act like typical grasshoppers. Most are found, when not swarming, in arid and often sandy environments. Unusually heavy rains in such areas can generate unusually lush vegetation, resulting in unusually large numbers of grasshoppers—which then transform into locusts and fly off en masse. They can make gargantuan formations, the largest of which in recent years have been estimated at 40 billion strong. 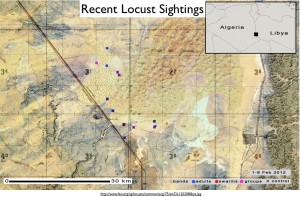 The most widespread species, the migratory locust, has declined in recent years, its last major African “plague” occurring in 1942. The reasons for its waning do not seem to be fully understood. The desert locust, however, remains a major threat over a broad swatch of territory extending from North Africa to South Asia, and several other species can be locally destructive. In both Africa and Australia, the spraying of the dried spores of entomopathogenic (“insect harming”) fungi has had some success in controlling outbreaks. 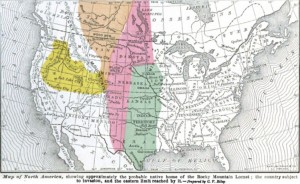 The biggest locust mystery surrounds the species that was responsible for the largest swarms, the Rocky Mountain locust of North America. One outbreak in 1875 was estimated to have contained 12.5 trillion grasshoppers, which together would have weighed some 27.5 million tons. Yet within thirty years, the species was extinct, and since then North America has been virtually locust-free.* The cause of its extirpation has never been determined, although it has been argued that “the plowing and irrigation by settlers disrupted the natural life cycle of the insects in the very small areas they existed in between swarms.” Yet vast areas of the Great Plains, the core habitat, were never plowed, and irrigation was rare here in the late 1800s. Nor was overgrazing the likely cause. Recent research conducted jointly by scientists at the University of Arizona and the Chinese Academy of Sciences determined that extant locusts thrive on “low-protein, high-carbohydrate diets, typically found in overgrazed areas.”

* The American bird grasshopper, Schistocerca americana, is occasionally regarded as a kind of locust, but it is usually classified an ordinary grasshopper.