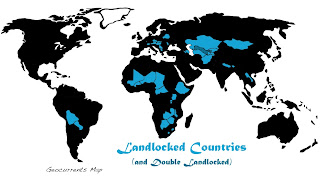 Many students are surprised at how few of the world’s sovereign states are landlocked, without access to the sea. The map above depicts the landlocked realm, leaving out the micro-states that cannot be seen at this scale of resolution. Luxemburg is visible on the map – although just barely – but Andorra, San Marino, and Lichtenstein are not. Lichtenstein is one of the world’s two double-landlocked counties, which are bordered only by sovereign states that are themselves landlocked. The other country in this category is Uzbekistan, and is thus depicted as such on the map.