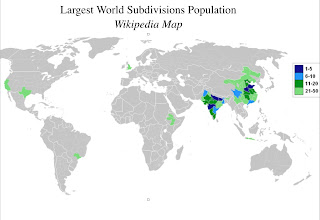 It is common knowledge that China and India are the two most populous countries in the world. What is less commonly appreciated is the fact that they demographically tower over almost every other sovereign state. Whereas China has some 1.3 billion inhabitants and India is closing in on 1.2 billion, only two other countries have more than 200 million people: the United States (309 million) and Indonesia (234 million).

One of the most illustrative portrayals of India and China’s demographic dominance is a recent Wikipedia map with the awkward title of “Largest World Subdivisions Population.” It depicts the 51 most populous political subdivisions in the world, 39 of which are located in India and China. The number 51 was evidently selected in order to include Texas. If 53 selections had been made, India would have had two more entries. The only other countries with more than one subdivision on the list are Indonesia (East Java and Central Java), Ethiopia (Oromia and Amhara), Bangladesh (Dhaka and Rajshahi), Pakistan (Punjab and Sindh) and the United States (California and Texas). The top 21 entries, moreover, are all in either India or China (with England coming in at 22). (Note: the cartographer has neglected to include the two Bangladeshi subdivisions on the map. Several other deviations between the map and the list also occur.)

In terms of their basic geographical scope as well as their population, India and China are comparable to Europe as a whole rather that to any given European country. India also shows levels of cultural and economic diversity equal to that found in the European Union. But because India is a single country, such diversity is often overlooked.

Beginning next week, Geocurrents will explore Indian diversity, presenting a series of state-level maps on the social and economic development of the country.