Ethiopia is a notoriously drought and famine plagued country. Although the western highlands receive abundant precipitation, the densely populated eastern highlands are much drier. Almost all the precipitation that this area receives falls in a brief window during the summer. When summer rains are inadequate, as they frequently are, famine typically results. Ethiopia’s most densely populated areas are in the southern highlands, an ethnolinguistically diverse area that has long been both politically and economically marginalized. Despite its rapid economic growth since 2003, Ethiopia is still a very poor country, and the southern highlands is one of its poorer areas. One would therefore expect it to be particularly vulnerable to famine. 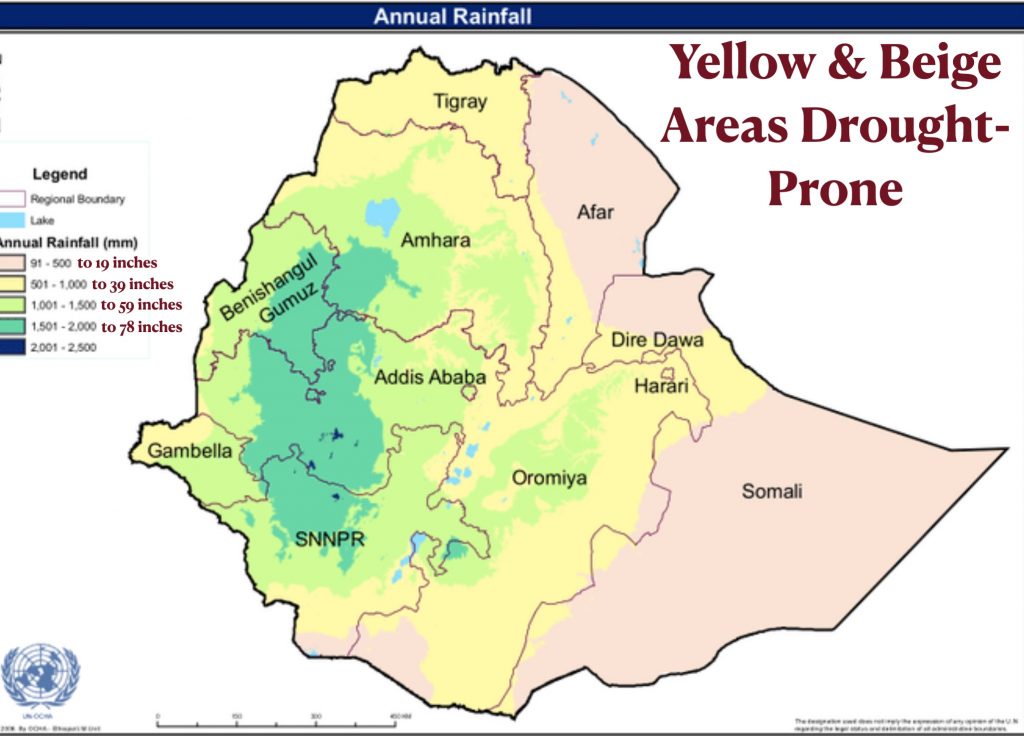 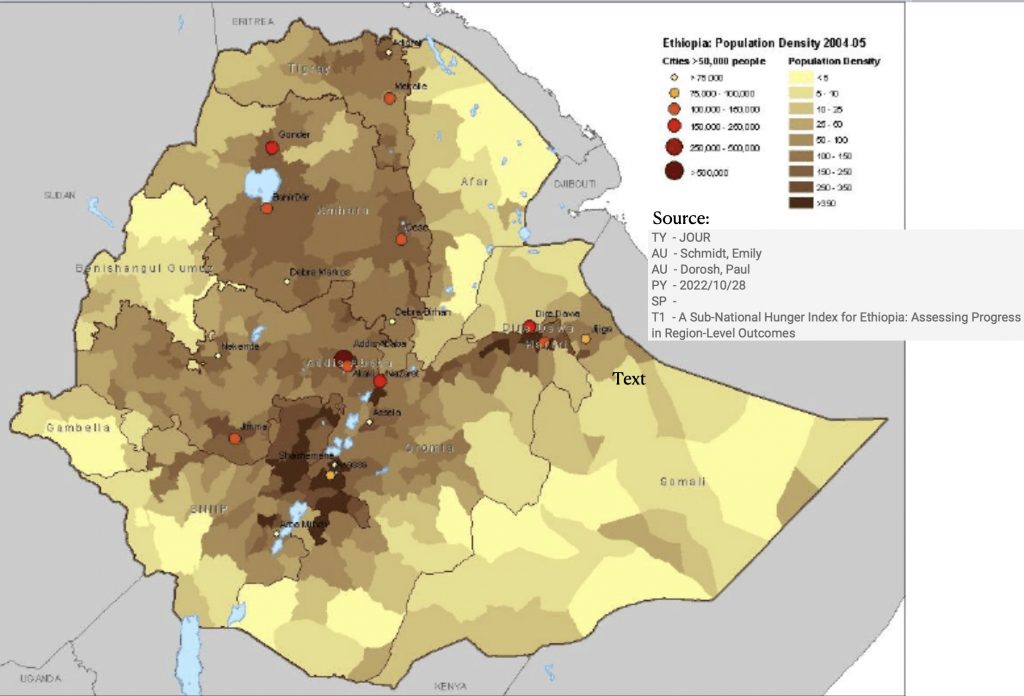 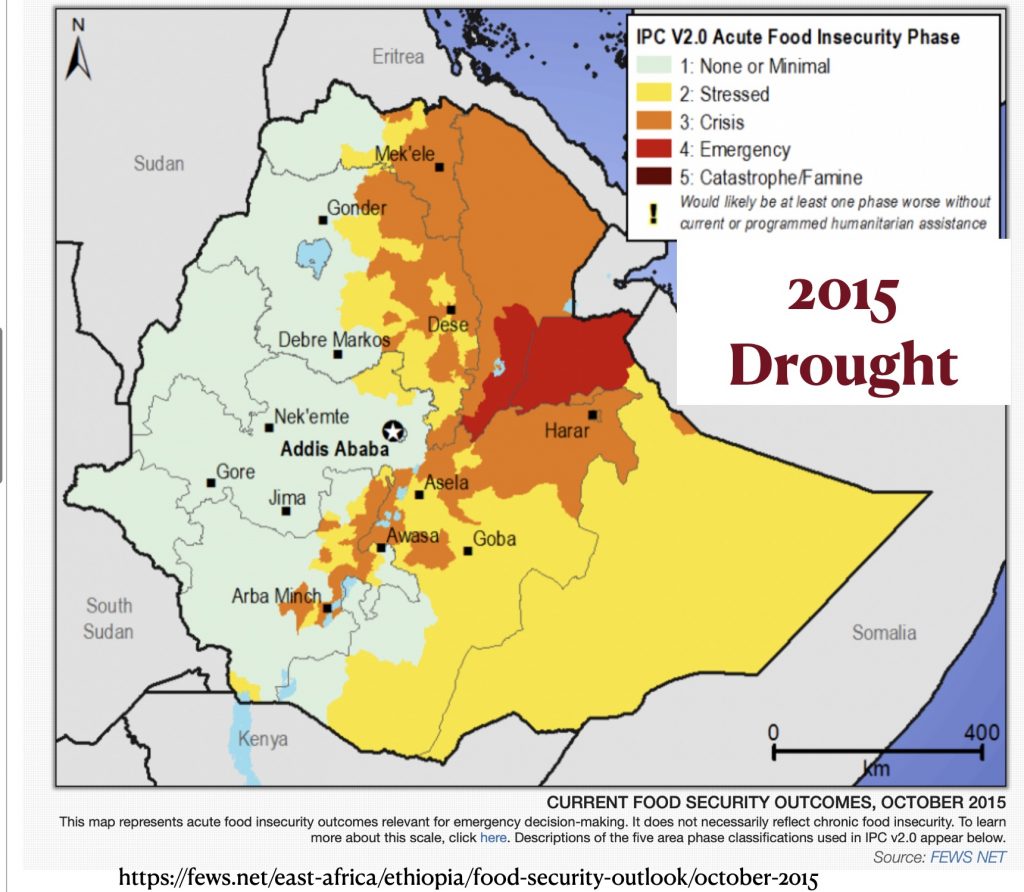 Yet despite all of these disadvantages, the southern highlands are much less prone to famine than Ethiopia’s core zone in the northern and central highlands. The answer to the seeming paradox is simple, found in the area’s staple crop. The people of the northern and central highlands subsist largely on grain, which is highly vulnerable to dry weather during the growing season. Those of the southern highlands, in contrast, subsist largely on enset, which is far more resilient. This crop, unique to Ethiopia, is a close relative of bananas and plantains. It is not cultivated for its fruit, however, but rather for its carbohydrate-rich leaf sheaths and corms. 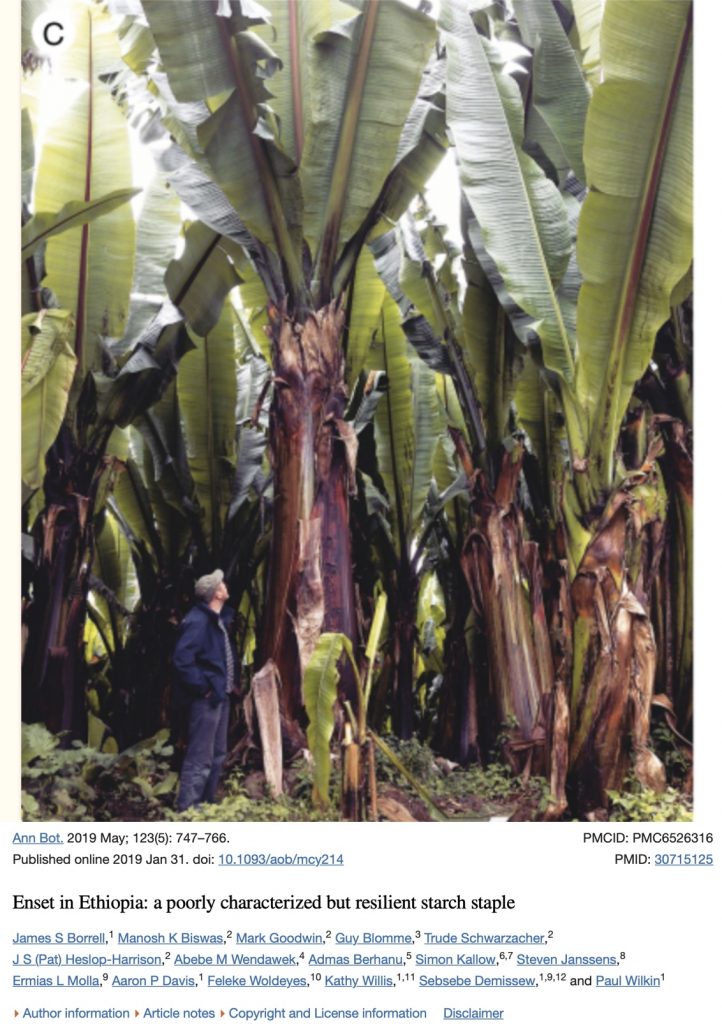 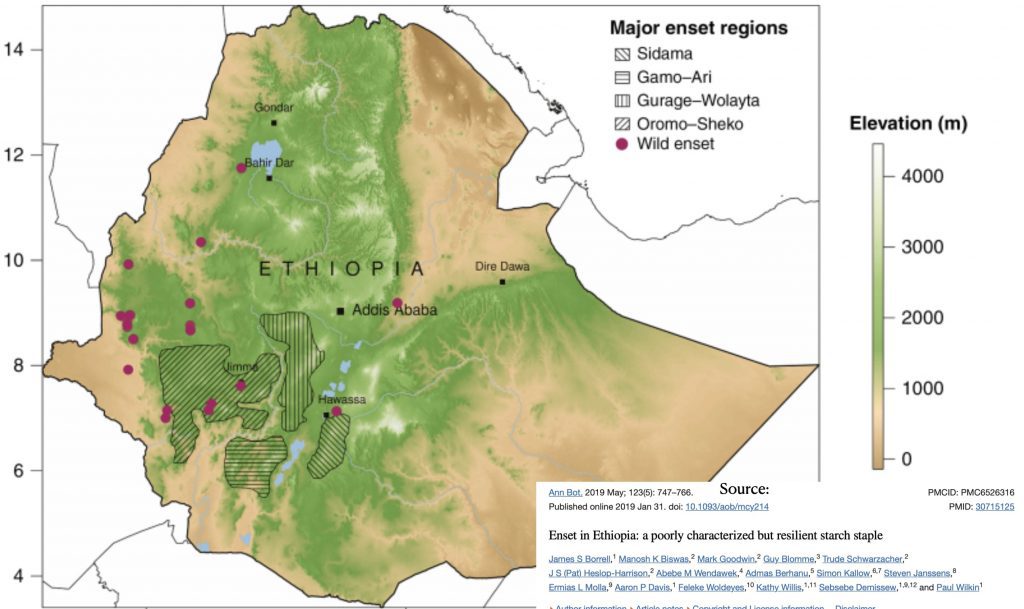 The advantages of enste are nicely explained in a recent article entitled “Enset in Ethiopia: A Poorly Characterized But Resilient Starch Staple.” As the authors write:

Enset has historically been ascribed as a ‘tree against hunger’ (Brandt et al., 1997), due to the domesticated plant having important attributes that support the food security of communities that cultivate it. These attributes were evident during the devastating famines of the 1980s, where enset-growing communities reported little-to-no food insecurity (Dessalegn, 1995). Most significant is the apparent ability of enset to withstand environmental stress, including periods of drought (Quinlan et al., 2015). Enset can also be harvested at any time of the year and at any stage over several years (including when it is immature), and enset-derived starch can also be stored for long periods (Birmeta, 2004). Enset also provides fibres, medicines, animal fodder and packaging material (Brandt et al., 1997). It stabilizes soils and microclimates (Abate et al., 1996) and is culturally significant (Kanshie, 2002; Negash and Niehof, 2004; Tewodros and Tesfaye, 2014). Enset has a complex management system supported by extensive ethnobotanical knowledge (Borrell et al., unpubl. res.). In a comparison of starch crops, enset has been reported to produce the highest yield per hectare in Ethiopia (Tsegaye and Struik, 2001; Kanshie, 2002) with relatively low inputs and management requirements. Enset therefore has the ability to support a larger population per unit area than regions relying on growing cereals (Yirgu, 2016). As a result of these qualities, enset farming provides a long-term, sustainable food supply capable of buffering not only seasonal and periodic food deficits, with minimum off-farm input, but also demonstrates potential that exceeds its current utilization in South-West Ethiopia.

Enset could be cultivated in many tropical areas. If it were to spread, food security could be significantly enhanced in some very poor and marginalized areas. Unfortunately, most international agricultural research has focused on a handful of crops, particularly wheat, rice, and corn (maize). If more attention could be given to highly productive minor crops such as enset, major benefits could probably be gained.