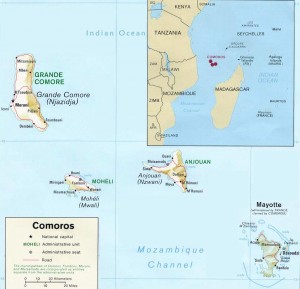 Although Mayotte is a troubled island, its difficulties are minor compared to those of the other islands in the Comoro Archipelago, which collectively form an independent state. By some accounts, the Comoros is the most coup-wracked country in the world, having suffered twenty military assaults on its government since independence in 1975. Its instability is almost matched by its poverty; as listed by the IMF, the Comoros ranks 166th out of 183 countries in per capita GDP (in PPP). Food insecurity is widespread, and according to a recent report, the Comoros has experienced an increase in hunger since 1990. Private enterprise is weak and discouraged; according the World Bank’s most recent “ease of doing business report,” the Comoros is one of a handful of countries that would tax a hypothetical small ceramics firm at a rate “exceeding 100% of its profit.” It is thus hardly surprising that many residents of this densely populated state have fled to French-controlled Mayotte in recent years.

As mentioned in the previous post, the Comorian island of Mayotte voted to remain under French sovereignty in a 1974 plebiscite. Supposedly, in the same election the residents of the other islands in the archipelago—Anjouan (Ndzuwani), Grande Comore (Ngazidja), and Mohéli (Mwali)—voted by more than 99.9 percent for independence. Many evidently came to regret that decision. In 1997, both Anjouan, and Mohéli first declared their independence and then sought the reinstitution of French rule. France declined the offer, and federal Comorian troops brought the recalcitrant islands back under central control. Resistance to centralization persisted, however, leading to mediation by the African Union. As a result, in 1999 each island was granted substantial autonomy, and the country itself was rechristened the Union of the Comoros. 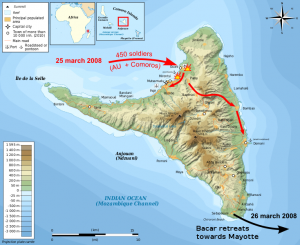 Despite decentralization, inter-island tensions and general political instability persisted. Problems came to a head in 2007 and 2008 on the island of Anjouan. Anjouan’s president, Colonel Mohammad Bacar, refused to step down after federal authorities accused him of rigging the most recent election, which he had ostensible won with over ninety percent of the vote. The central government appealed to the African Union, which responded with a 2000-troop invasion force. Soldiers from Sudan, Tanzania, and Senegal—with logistical backing from France and Libya (!)—soon restored the island to federal authority. Bacar fled to French-controlled Mayotte, prompting a sizable anti-French demonstration in the capital city, Moroni. Eventually he found sanctuary in Benin.

Tension between the Comoros and France has not kept the island country from joining French-led international associations, such as the International Organization of the Francophonie and the Indian Ocean Commission. But then again, the Comoros has joined a wide array of international groups, including the Arab League. Membership in the Arab League is somewhat unusual, as the Comoros is not an Arabic-speaking country.* Evidently, its leaders are hoping to address that situation, at least as far as the government itself is concerned. On October 4, 2011, a press release from Kuwait noted that the “Foundation of Abdulaziz Saud Al-Babtain’s Prize for Poetic Creativity announced on Tuesday that Prime Minister of the Republic of Comoros issued a decree stipulating that all his ministers would be attending the Arab language courses held by the Foundation.”

The indigenous inhabitants of the various islands of the Comoro Archipelago are culturally similar. Uninhabited before the sixth century CE, the islands were settled, like Madagascar, by peoples from both Indonesia and East Africa. The Comoro islands, unlike Madagascar, were subsequently tightly entwined in East African and Arabian trade networks, eventually forming an insular extension of the Swahili Coast. Arab merchants settled, and the common version of Swahili gained a particularly heavy Arabic influence. The resulting Comorian (or Shikomor) language is the common tongue of the archipelago, although each island has its own local dialect.

The religious demography of the Comoros not entirely clear. Wikipedia and the CIA Factbook state that 98 percent of the islanders are Sunni Muslims, with the rest following Roman Catholicism.** Other sources cite a Shia presence, varying from slightly less than one percent to as much as five percent of the population. Freedom House, moreover, claims that “Tensions have sometimes arisen between Sunni and Shiite Muslims,” which would indicate a non-trivial Shia*** presence. Intriguingly, the former president of the Comoros (until May 2011), Ahmad Abdullah Sambi, was so fond of Iran that he was dubbed “The Ayatollah of Comoros.” Ostensibly a Sunni Muslim, Sambi was lauded in the Iranian media as a convert to Shia Islam and for proselytizing on its behalf (2008).  At the same time, the Comoros Sunni religious establishment angrily accused the entire government of “favouring the spread of Shiism.”

Regardless of Shia numbers, I have not found any evidence suggesting that religious practices differentiate one island in the Comoros from another. Linguistic differences are minor, and history is shared. Why then are relations among the islands so fraught? Global comparison suggests that insularity itself may play a role; the individual islands in small, politically bound archipelagos sometimes develop deep rivalries. A prime example would be the ABC islands of the former Dutch Antilles: Aruba, Bonaire, and Curaçao. Their cultural differences may be minor, but their political relations have generally been tense.

* The other non-Arab members of the Arab League are Somalia and Djibouti.

** The Christian proselytizing Joshua Project pegs the Christian population of the Comoros at 0.01 percent. It also claims that among the Muslim community, “mosque attendance is very low. Mixed with their Islamic practices is a strong involvement in occultism and spirit possession.”

** Presumably most Shiites in the Comoros are Twelvers (Ithnā‘ashariyyah), followers of the largest branch of the faith, dominant in Iran and southern Iraq. Evidence gleaned from on-line matrimonial advertisements, however, suggests a Dawoodi Bohra (an offshoot of Ismaili Shiism) presence, linked to the Gujarati diaspora. The Bohras are noted for their high rates of educational and professional achievement, for women as well as men. I have not provided a link, however, as it seems rude to link to such personal sources of information.