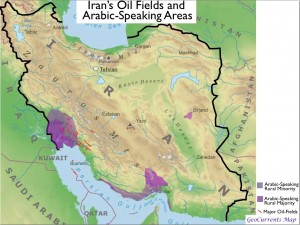 If Saudi Arabia faces a restive Shia minority in its main oil-producing area (see GeoCurrents Oct. 14, 2011), Iran has a similar challenge. Its foremost oil-producing zone—the southwestern province of Khuzestan (Ahwaz in Arabic)—is the heart of Iran’s dissatisfied Arabic-speaking minority. Fear of unrest in Khuzestan looms large in Iranian security deliberations. Not only does the region suffer pervasive ethnic tension, but its physical geography makes it vulnerable to invasion. As the maps indicate, most of Khuzestan lies in the flat plains of the greater Tigris-Euphrates Valley, cut off from the Iranian heartland by the rugged Zagros Mountains.

The vulnerability of Khuzestan, along with its ample oil and disgruntled populace, enticed Saddam Hussein to invade the region in 1980, initiating the bloody Iran-Iraq War (1980-1988). Hussein proclaimed himself the liberator of the Iranian Arabs, hoping they would rally to his cause. The invasion backfired. Not only did Khuzestan’s Persian population remain loyal to Iran, but so did most of its Arabs. As Shiites, most of Iran’s Arabic-speakers saw little to be gained from Saddam Hussein’s anti-Shia regime. The resulting war devastated the province, where many of its most ferocious battles were fought. As summarized by Wikipedia, “many of [Khuzestan’s] famous nakhlestans (palm groves) were annihilated, cities were destroyed, historical sites were demolished, and nearly half the province went under the boots of Saddam’s invading army. This created a mass exodus into other provinces …” 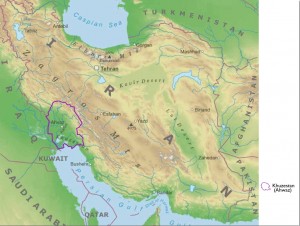 Although Khuzestan’s Arabs remained loyal to Iran in the 1980s, evidence indicates that few are currently pleased with Iranian rule. Major demonstrations and rioting broke out in 2005; all were firmly suppressed. Iranian Arabs complain of discrimination and lack of linguistic and cultural rights. The community is relatively poor overall, despite inhabiting the most economically productive part of the country. Drug addiction is widespread and Khuzestan is reputed to be one of the main gateways for the importation of heroin and other narcotics into Iran. A recent report claims the city of Ahwaz, the capital of Khuzestan, is the most polluted urban area in the world. Iran has responded by investing in the province, inaugurating “a number of giant petrochemical projects in Khuzestan” in early 2011. Official Iranian news outlets, however, continue to caution the country about the potential dangers of Arab separatism. On October 7, 2011, PressTV warned its viewers that “The Khalgh-e Arab group, who want Khuzestan province separated from Iran, [get their] doctrine from Iraq’s Baath Party. These groups have blown up several public places in Iran’s southern region, killing scores of people.”

Arab-Iranian activists, for their part, deny that Khalq-e Arab even exists, claiming that the Iranian state uses the phantom organization as an excuse to crush dissent. According to the Ahwazi Arab Solidarity Network, the Iranian government has been busy “concocting conspiracy theories” linking unrest in the region with US and British effort to destabilize the country. The same source further claims that Iranian news agencies have also been pushing the line that “militant Wahhabi (Sunni fundamentalist) groups were being supported by Gulf states to foment separatist sentiment in the oil-rich region that forms the Ahwazi Arab homeland.” The Ahwazi Arab Solidarity Network itself maintains that the oppositional movement of Iranian Arabs is peaceful and above-board:

Ethnic Ahwazi Arabs are demanding collective rights, including the redistribution of oil revenues, an end to forced displacement, equal labour  rights, environmental protection and cultural freedom. The Ahwazi Arab Solidarity Network supports non-violent direct action as well as the use of   international lobbying and awareness-raising to assert the collective rights of  this persecuted ethnic group.

Other Arab-Iranian websites strike a less accommodating tone. The National Liberation Movement of Ahwaz, for example, supports the full independence of the province, and seems to advocate revolutionary practices. It is difficult for someone who does not read Arabic, however, to determine the group’s actual agenda, as the prose on its English-language website is delightfully mangled:

However, in the name of Islam apparently, Islamic republic and its interior,  truthfully, and the way in practice on the ground will translate legacy Persian Khosrawi authoritarian racially hateful everything is not set in all walks of  life, starting of human rights through the rights of peoples bonded who under  the yoke occupation and colonialism Persian racial and ending the  destruction of those nationalities oppressed in the case of claiming their  legitimacy and the historical. 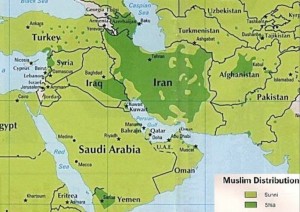 Not surprisingly, even the most basic demographic information on the Iranian Arabs is disputed. The Ahwazi Arab Solidarity Network claims that around four million Arabs live in Khuzestan alone, whereas the Wikipedia pegs Iran’s entire Arabic-speaking population at something between 778,000 and 2,336,000. By most accounts, Khuzestan’s rural population is mostly Arab, whereas the urban population is mixed, with Persians predominating.  The religious disposition of the Ahwazi community is also unclear. Most sources claim that “most” Iranian Arabs are Shiites, which certainly makes sense. Some unspecified proportion of the community, however, follows Sunni Islam, which would greatly intensify its hostility toward the Iranian state. Surprisingly, the most widespread map of Islam on the internet portrays Khuzestan as mostly Sunni, which is almost certainly incorrect.

The situation in Khuzestan also figures in discussions of US–Iranian relations, especially in regard to the impending withdrawal of American troops from Iraq. A recent article in the left-leaning New American Media website, for example, speculates that Iran might be tempted to move military forces into southern Iraq to safeguard its own oil reserves; in the face of any such advance, the author continues, “Washington would have little alternative to an invasion of Khuzestan, ostensibly aimed at halting Iranian incursions…” This scenario seems highly unlikely, but the potential for serious, near-term conflict in the province does seem real.