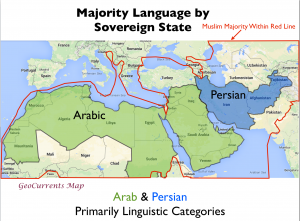 My second-to-last lecture on the history and geography of current global events has now been delivered, and the slides are available here at the link. As is noted on the first slide, the lecture was titled, Iran: Nuclear Negotiations, Geopolitical Ambitions, Cultural Complexities, and Historical Legacies.

Next week I will speak on Nigeria; after that I hope to resume regular posting on GeoCurrents.

In the map posted here, Farsi (Iran), Dari (Afghanistan), and Tajik (Tajikistan) are all taken to be dialects of Persian. Afghanistan is mapped as a Persian-speaking country even though it is possible that a bit less than half of its population speaks Dari as its mother tongue. But even if this is the case, Persian is still the main language of inter-ethnic communication in the country.

In the lecture, I played a four-minute video clip of the Iranian American comedian Maz Jobrani joking about the differences between Iranians (Persians) and Arabs (a still-shot of Jobrani’s routine is included in the slides). I played this clip because I think that comedy is an effective way of conveying  ethnic stereotypes that may be offensive but are still important to understand. I also think that Jobrani is a talented comedian. But in the beginning of his routine, Jobrani makes some comments about Iranians being “Aryans” that I could not let pass. As a result, the slides following the one of Jobrani take a short detour into the issue of Indo-European linguistics.