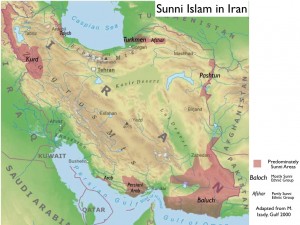 Uninformed voices in the United States commonly refer to Iran as an “Arab country”—a fundamental error committed even by outlets as respectable as Slate magazine. Few Americans grasp the lines of division between Arab and Persian (or Iranian) culture and society. Iranian-Americans emphasize the distinction; calling a person of Iranian heritage an Arab is likely to provoke a quick lecture on the subject. Websites with names as subtle as PersiansAreNotArabs.Com spread this message so insistently that it has become an object of humor within the community. Iranian-American comic Maz Jobrani’s “Persians vs. Arabs” video has reached 456,035 YouTube viewers. While Jobrani’s routine is gently satiric, the 1,407 comments that it has garnered range from harsh to vile, bandied back and forth between Arab and Persian partisans. Many focus on the name of the body of water that lies between Iran and the Arabian Peninsula. As one obscenity-free but historically challenged comment frames the issue: “ARABS FINISHED THE persian EMPIRE IN LESS THEN 10 YEARS. AND SINCE THEN THEIR EMPIRE DOESNT EXIST ANYMORE. ARABS ARE STILL THERE AND THEY CONTROL AND USE THE GULF MORE. ARABIAN GULF FOREVER!!. “

As basic as it is, the distinction between Arabs and Iranians can be over-stated. As noted in a previous post, more than a million Iranians are Arabs. In both Iran and the Arabian Peninsula, moreover, so-called Persian Arabs—people of mixed background—maintain cultural traditions associated with both groups. Over long periods of time, hundreds of thousands of Persian Sunnis fled across the Gulf to avoid discrimination, a movement that was especially pronounced under the rule of Muhammad Reza Shah Pahlavi (1941-1979). In Bahrain, a few of these refugees and their descendants still “speak a dialect of Persian sometimes referred to as Khodmoni [or Khodmooni].” On the other side of the Gulf, some self-identified Iranian Arabs actually speak Farsi (or Persian) as their mother tongue, having lost the language of their ancestors. Most of the estimated 50,000 Arabs of Khorasan in northeastern Iran, for example, are Persian-speakers. Intriguingly, those Khorasani Arabs who maintain their original language speak an “extremely ancient Arabic dialect.”*

The common identification of Shia Islam with Iranians and Sunni Islam with Arabs likewise represents an oversimplification. Tens of millions of Arabs are Shiites, including the majority of Iraqis and Bahrainis. And while most Iranian Muslims are indeed Shiite, some ten percent follow Sunni Islam. Iranian Sunnis are mainly Baloch or Kurdish, but an unspecified number are Persian, concentrated in the southern province of Hormozgan and in the northeastern city of Mashhad. Like other Sunnis in Iran, they face discrimination. A year ago, Sunni Online, the “official website of the Sunni Community in Iran,” ran an article claiming that pressure and even violence against the community were increasing “day by day.” An intriguing recent discussion thread on the Sunni Forum website delivered a more mixed message. Here an Iranian commentator calling himself “Sunni Warrior” tells his fellow sectarians, “Sunnis have no problem [in Iran]. But if you are shia and then become sunni you will get hanged for turning kufir.” (Sunni Warrior also provides an insightful comment that hits a little too close to home: “And don’t trust those western maps, you know they divide us in sunni and shia areas! If a place has 52% sunni and 48% shia they make it a sunni area…”) 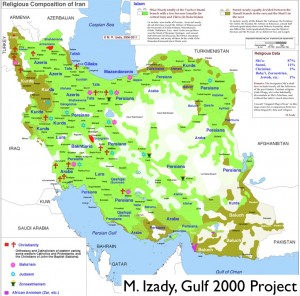 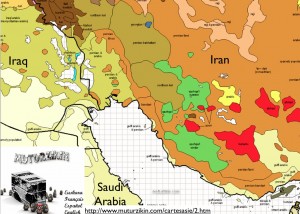 As mentioned in the previous GeoCurrents post, most Iranian Arabs are Shiites. Mike Izady’s remarkably detailed map of religion in Iran and vicinity, however, depicts the Arabic-speaking coastal strip of Bushehr Province as Sunni. Comprehensive linguistic maps indicate that this area’s inhabitants speak Gulf Arabic, rather than the Iraqi Arabic prevalent in Khuzestan province, which would help explain the religious differentiation of Iranian Arabs.

Astoundingly, Izady’s map of religion shows an area of “African Animism” in southeastern Iran. A community of African descent, the Ahl-i Hava, does indeed inhabit this area, which Iraj Bashiri linked in 1983 to the Portuguese importation of slaves from southeastern Africa in the 16th century. (Others have hypothesized different origins, including, bizarrely, descent from pre-Indo-European indigenes!) Bashiri portrays the faith of the Ahl-i Hava as a syncretic blend of Shia Islam and animism, the latter marked by the peculiar worship of winds blowing from particular directions. Until recently, another ethnic group practiced animism in the country as well: the Godars, “nomadic gypsies who migrated from India to Iran.” According to director Bahman Kiarostami’s 2004 film “Infidels” (Koffar), the Godars were forcibly converted to Shia Islam after the Islamic revolution of the 1970s; evidently they are still widely viewed as infidels by others.

*The phrase used in the German report on the subject is “außerordentlich altertümlichen arabischen Dialektes.” Khorasani Arabs may be few in number but they are of considerable historical importance, having been the main military force behind the replacement of the Umayyad Caliphate by the Abbasid Caliphate in 750 CE. Some scholars have argued that the subsequent Abbasid “Golden Age” was in large part the result of the fusing of Arab and Persian (as well as Greek) intellectual traditions. In later periods as well, many of the finest Persian scholars, including the astounding geographer and polymath al-Birunī (973-1048 CE), wrote mostly in Arabic rather than Persian.