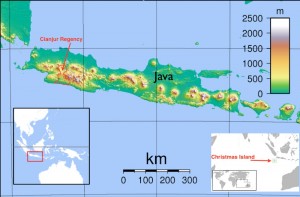 The on-going Australian asylum-seeking controversy has recently spread to the Indonesian island of Java. On August 20, the Jakarta Post announced the arrest of “28 illegal immigrants hiding in a forested coastal area of South Cianjur, West Java. The immigrants were part of a large group of asylum seekers from Iraq, Afghanistan, Pakistan and Iran who were heading to Christmas Island.” The report went on to note that a total 61 asylum seekers have been detained, and that a number of others are still being sought. The Australian government had previously reached an agreement with Indonesia that would allow its navy to turn boats with asylum seekers back to Indonesian waters, but it has announced that it will not pursue that option.

Christmas Island is a small (135 km2; 52 sq mi) Australian territory located much closer to Java than to the Australian mainland.  Asylum seekers bound for Australia are held in detention centers on the island for processing. Because many detainees are eventually given visas and allowed into the country, boats carrying refugees often head for the island. Detainees on the island now number almost 1,700, as opposed to 1,400 permanent residents. Overcrowding is resulting in serious shortages of milk, fuel, and other goods on the island.

To cope with the record number of new arrivals, the Australian government has ordered the reopening of the detention centers on Nauru and Manus Island in Papua New Guinea that had been employed by the previous, much more conservative, government. Australian Prime Minister Julia Gillard of the Labor Party is now taking a hard line herself, threatening “indefinite detention for boat arrivals”—a maneuver much opposed by the Green Party. According to a recent report, the Australian intelligence service has discovered that “people smugglers have been overheard telling clients that even if they are sent to Nauru or Papua New Guinea’s Manus Island, they will eventually get to Australia if they are patient enough,” informing their customers that that “Nauru is ‘just another Christmas Island.’”

Australian law courts, meanwhile, are handling dozens of suits brought forth by former detainees on Nauru, many of who claim to have been suffered physical abuse along with “forced solitary confinement for 23 hours a day for as many as four weeks.” Over the past year, the government awarded former detainees with several million dollars in compensation funds.