As the most recent GeoCurrents post explained, heavy-metal music has been of some political importance in Indonesia, with the country’s new president, Joko Widodo, being a major fan. Although cultural tension between “metalheads” and conservative Muslim organization is an on-going issue, overt clashes have been relatively rare and restrained. Religious groups in Indonesia have, however succeeded in shutting down musical performances that they judge threatening to public morals. In 2012, for example, international news outlets widely reported the cancellation of a Lady Gaga show scheduled to be held in Jakarta. The performer reported feeling “devastated” by the news, but her Indonesian critics were highly pleased. As the BBC reported:

The Islamist FPI had threatened violence if the concert went ahead, calling Lady Gaga a “devil’s messenger” who wears only a “bra and panties”. Habib Salim Alatas, the group’s FPI Jakarta chairman, said the cancellation was “good news” for Indonesia’s Muslims. “FPI is grateful that she has decided not to come. Indonesians will be protected from sin brought about by this Mother Monster, the destroyer of morals,” he told AFP news agency. He added: “Lady Gaga fans, stop complaining. Repent and stop worshipping the devil. Do you want your lives taken away by God as infidels?” 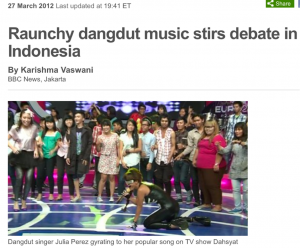 With this Lady Gaga commotion in mind, many observers might conclude that overt displays of female sexuality are not allowed, or are at least are highly frowned upon, in Indonesia, the world’s largest Muslim-majority country. But in actuality, this is not the case. For several decades, the most popular form of music across the Indonesia archipelago has been dangdut, described by the Wikipedia as a “genre of Indonesian folk and traditional popular music that is partly derived from Hindustani, Malay, and Arabic musics.” My own knowledge of popular music of obviously quite limited, as the dangdut performance that I have watched on YouTube strike me as more “techno” than folk in style. But regardless of the various influences that dangdut incorporates, the stage dancing that often accompanies the music can be extremely sexualized. Jupe, the genre’s star performer, has certainly not been shy about issue of sexuality. As reported first in the International New York Times and then in the Jakarta Post:

Julia Perez, 30, better known as Jupe (pronounced jew-peh), has quickly become one of this nation’s most sought-after celebrities and a mainstay of television gossip shows. In a society increasingly polarized between supporters of political Islam and Western-style openness, Ms. Perez has led the charge one way with her sexy shows and music videos, her celebration of female sexuality and frank talk about sex. Her best-selling album, “Kamasutra,” included a free condom, which drew the ire of Islamic organizations and got her banned from performing in several cities outside Jakarta, the capital.

Actress and dangdut singer Julia “Jupe” Perez did a pole dance at the Kuningan intersection, South Jakarta on Tuesday night, in order to fulfill a promise. In her Twitter account, Jupe had promised to do the dance if she got 1 million followers “Jupe promises to dance at a red light if [she] gets a million followers! Allah, please make it happen during this fasting month, so I can dance with my clothes on”…. Within a week, her wish came true. Donning a tight suit and a black leather jacket, Jupe moved sensually around the pole of a traffic light at the intersection. 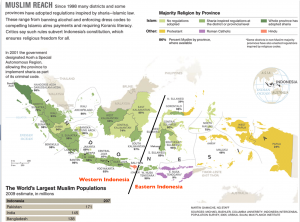 As these reports indicate, dangdut is widely disparaged by the more conservative portions of the Indonesian public, and some provinces have banned several songs for being “pornographic.” But overall, it remains the most beloved form of music in at least western Indonesia, by far the most populous and powerful half of the country. A 2012 article in the Jakarta Post reports that the popularity of dangdut has declined in eastern Indonesia (apart from Maluku), although it does not specify what is meant by the term “eastern Indonesia,” nor does it give any reasons for the drop in popularity in that region. (The terms “eastern Indonesia” and “western Indonesia” are often used, but have no formal boundaries to my knowledge; the division that I have inscribed on the map here is a mere estimation.) It is notable, however, that eastern Indonesia in general has a lower percentage of Muslims than western Indonesia, as can be seen in the map posted here.

The Jakarta Post article in question almost seems to imply that the decline of dangdut in the east is a possible threat to national unity. As the author contends:

When the media began promoting the music in the 1980s — and the government did the same in the 1990s — dangdut helped to provide a national narrative popular with most Indonesians. Government officials strategically used the genre to promote political messages on a national stage, often singing and dancing alongside dangdut artists, while cultural institutions used the music to create national unity. In March, an Indonesian official said the government was in the process of having dangdut promoted to the heritage list of the United Nations Educational, Scientific and Cultural Organization (UNESCO).

One problem with the use of dangdut, or of any other form of “traditional” music, to enhance national unity in Indonesia is the fact that most of these traditions extend across the border to include Malaysia (and, to some extent, Brunei, far southern Thailand, and other adjacent areas). In 2007, a minor diplomatic scuffle emerged over Malaysia’s use of the popular folk song Rasa Sayang in a tourism promotion campaign. As reported by The Star On-Line:

The call by Indonesian lawmakers for action against Malaysia for using the Rasa Sayang folk song – which Indonesia claims to be its traditional song – in its Truly Asia tourism campaign is unrealistic, said Datuk Seri Dr Rais Yatim. The Culture, Arts and Heritage Minister said the issue should not have arisen as the song, like other folk songs such as Jauh Di Mata, Burung Pungguk and Terang Bulan, were songs of the Malay archipelago inherited by the people from their ancestors.  “I think Indonesia or other parties will not be able to prove who the composer of the song (the Indonesian version being Rasa Sayange) was,” he told reporters at the breaking of fast organised by his ministry here on Tuesday. He was commenting on Indonesia’s House of Representatives member Hakam Naja, from the National Mandate Party, calling on his government to sue Malaysia over the use of Rasa Sayang in its tourism campaign.

In response, one Malaysia blogger re-wrote the song’s lyrics (in English) to showcase Malaysia. My favorite verse runs as follows:

Though it’s great to be Malaysian,

Not everything is perfect, you see,

Rasa Sayang is claimed to be Indonesian,

And it’s cause for controversy.

Malaysia’s world stance is on the rise,

We keep our image looking bright,

Our government is pretty wise,

And our people are super tight.

As a first take-home message from all of these controversies, I can only conclude that public values in Indonesia remain quite distinctive and far more open to displays of female sexuality than those of the Muslim areas of South Asia, or of the Middle East. I cannot imagine a Pakistani equivalent of Jupe performing a pole dance at a major intersection in Karachi while praising Allah for giving her enough Twitter fans so that she could remain clad while doing so. The second message concerns the generally successful efforts to create a strong sense of national identity across the sprawling archipelagic country of Indonesia. Here the pronounced degree of cultural commonality with Malaysia remains an obstacle, and will likely generate new controversies in the years to come.