And the Capital of Sri Lanka Is? 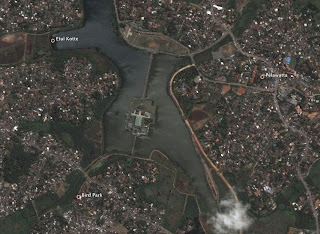 Perceptive Geocurrents reader Gnesileah noted that the Mo Rocca/Claire Calzonetti “capital-off” contest (posted on January 30) contained a few minor errors. The capital of Sri Lanka is not Colombo, as Mo Rocca had responded, apparently correctly, but rather Sri Jayawardenapura Kotte (usually simply called “Kotte”). Kotte is not far from Colombo, but it is a distinctive city in its own right. As Gnesileah went on to explain, the issue is complicated, as many governmental ministries remain in Colombo. Since 1982, however, Sri Lanka’s parliament has been situated in the middle of a small lake in the bucolic suburb of Kotte, as can be seen in the Google Earth image posted above. Officially, Sri Jayawardenapura Kotte is indeed the capital city. 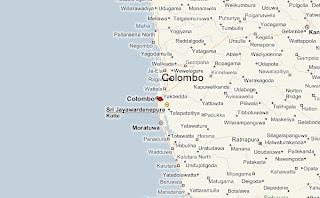 Reference works have been reluctant to note the change. WikiAnswers, for example, responds to the question “what is the capital of Sri Lanka with: “Colombo (Economical), Sri Jayawadenapura Kotte (Political), Colombo, Colombo and Sri Jayewardenepura Katte,” rather hedging its bets. The CIA World Factbook lists Colombo as Sri Lanka’s capital, but adds, “note: Sri Jayewardenepura Kotte (legislative capital).” A Google search of “Sri Lanka Capital City” yields mostly Colombo entries, and seems to include as many listing of the ancient capital of Anuradhapura as of Sri Jayawadenapura Kotte.

Insisting that Colombo is Sri Lanka’s “economical” capital is an odd maneuver. One would never see the capital of the United States, for example, listed as “New York (Economical), Washington, D.C. (Political), San Jose (Technological).” But since few non-Sri Lankans have ever hear of Sri Jayawadenapura Kotte, this kind of geographical slight–of-hand seems unexceptional.

Claire and Mo had agreed that their contest was a standoff, but in light of Gnesileah perceptive comments, Geocurrents regards Claire Calzonetti as the reigning champion. Perhaps what is needed now is a rematch.