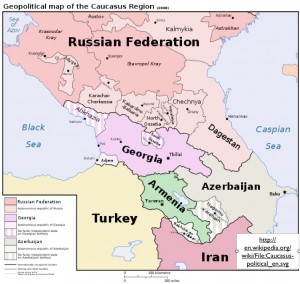 For the next two weeks or so, GeoCurrents will examine the Caucasus. This unusually long focus on a particular place derives from several reasons. The Caucasus is one of the most culturally complex and linguistically diverse parts of the world, noted as well for its geopolitical intricacy and intractable conflicts. The region contains three internationally recognized sovereign states (Georgia, Armenia, and Azerbaijan), three mostly unrecognized self-declared states (Abkhazia, South Ossetia, and Nagorno-Karabakh), and seven internal Russian republics (Dagestan, Chechnya, Ingushetia, North Ossetia-Alania, Kabardino-Balkaria, Karachai-Cherkessia, and Adygea); in addition, Islamist insurgent have declared a virtual “Northern Caucasus Emirate” in the Russian-controlled part of the region. Struggles in the Caucasus have global ramifications, as was made evident in the summer of 2008 when the Russian military triumphed over the U.S-backed government of Georgia. In world historical terms as well, the Caucasus is surprisingly significant. Several Caucasian ethnic groups—particularly the Ossetians, the Circassians, and the Armenians—have played major roles on a vastly wider stage.

Despite the importance of the Caucasus, the region is often overlooked in the international media. When noticed, it is often portrayed as a remote and violence-plagued place, a jumble of mountains situated at the periphery of some other region: the Russian extreme south, the Middle Eastern extreme north, or the European extreme southeast. The region is also often misconstrued. Confusion can be generated by something as simple as replicated place names. As was recently explored in GeoCurrents, the country of Georgia and the U.S. state of Georgia are often mixed-up in web-searches, while the historical Caucasian kingdoms of Iberia and Albania are sometimes taken for the European peninsula and country of the same names. Befuddlement even attaches to the term “Caucasian,” which in some circumstances refers to the peoples and features of the region, yet in others denotes a supposed biological race more generally associated with Europe. 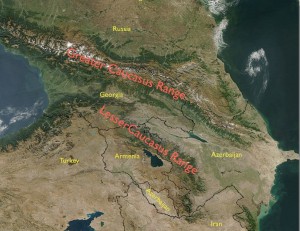 The peripheralization of the Caucasus, however, is an artifact of conventional ways of dividing the world, not a reflection of the region’s intrinsic position. By changing the frame of reference, the Caucasus is revealed as a key place, one that historically linked the Black Sea and Caspian Sea basins, and, more broadly, the greater Mediterranean world with the Central Asian realm of the Silk Roads. The region may have formidable mountain barriers, but it also contains a broad swath of lower lands sandwiched between the Greater and Lesser Caucasus ranges, which long formed an important trade corridor and is now a major oil-pipeline route. And if one steps back a little further to examine all of Western Eurasia—the zone from Europe to India—the Caucasus appears as a central place. The direct line, or great circle route, from London to Mumbai passes directly through the lowlands of Georgia and Azerbaijan. 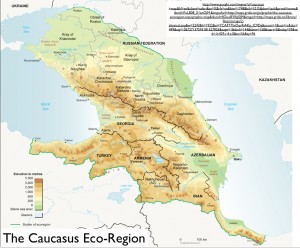 Definitions of the Caucasus vary, although most regionalization schemes encompass the same general area. A maximal Caucasus, visible in the map posted here, stretches from the Kuma–Manych Depression in the north to northeastern Turkey and northwestern Iran in the south. A more common definition excludes much of the northern plains as well as the southern highlands in Turkey and Iran, essentially covering the area bracketed by the Greater and Lesser Caucasus ranges along with their adjacent lowlands. The Caucasus as a whole is commonly split into two sub-regions: the Ciscaucasus, which encompasses the Russian-controlled area to the north of the main mountain crest, and the Transcaucasus, which takes in the area to the south (Georgia, Armenia, and Azerbaijan, essentially). Such terminology, however, is rejected by some for perpetuating a Russian imperial perspective, since the Latin word “cis” means “this side of” where “trans” refers to “the other side of.” 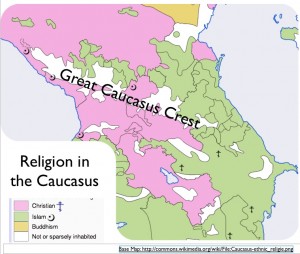 The Caucasus does not fit comfortably into any of the basic units of global geography. In the conventional continental scheme, the division between Europe and Asia runs along the crest of the Great Caucasus Range, putting the Ciscaucasus in Europe and the Transcaucasus in Asia. Georgians and Armenians, however, often take offense at this definition, preferring a European over an Asian designation for their homelands.* This continental distinction, some argue, inaptly places the region’s mostly Christian southwest in Asia and its mostly Muslim north in Europe. Yet in practice, the standard Europe/Asia divide means little these days, and few people even realize that the European “continent” officially terminates at the crest of the Great Caucasus. Southwestern Asia, moreover, has gradually been written out of Asia and instead placed in the quasi-continent of the Middle East—but the Middle East rarely includes the Caucasian countries.

Where then does one place the Caucasus, if it does not fit into Europe, Asia, or the Middle East? The default option is to group it with Russia.** Spanning the supposed continental divide, Russia is commonly conceptualized as the core of its own world region, one that also includes Armenia, Georgia, and Azerbaijan as well as a few other former Soviet states. This scheme makes a certain amount of sense. The Caucasus was dominated by Russia from the early 1800s to the late 1900s, and its northern swath is still part of the Russian Federation. Yet when the Soviet Union collapsed in 1991, Armenians and especially Georgians began to seek regional reassignment, wanting clear differentiation from the Russian realm.

Most Georgians and Armenians would prefer to have their countries grouped with Europe. Although Europe as a supposed continent does not include the Transcaucasus, there is no reason why all or part of the region cannot be slotted into a politically or economically defined Europe. In fact, Georgia, Armenia, and Azerbaijan already belong to the Council of Europe. All three are also officially tied to the European Union through its Eastern Partnership (EaP), along with Belarus, Moldova, and Ukraine. Evidently, leaders of some EU states see the Eastern Partnership as a stepping-stone for actual membership, whereas others hope to avoid such a possibility. Public opinion polling shows that a substantial majority of Armenians want their country to eventually join the European Union, while key politicians in Georgia have expressed a more immediate desire for membership.

The question of where the Caucasian countries should be regionally classified cannot be clearly answered: it is simply not feasible to divide all parts of the world into ideally demarcated, non-overlapping regions. As far as I am concerned, Georgia can simultaneously be regarded as part of Europe, Asia, the Middle East, and a Russian-focused region. Certain regional frameworks work better than others for certain issues. But it is also true that some parts of the world do not fit well into any of our standard regions, the Caucasus among them. As a result, it is often best to regard the entire area as forming its own distinctive world region. Doing so helps place the Caucasus on the map of the world, positioning it not as an interstitial zone “between” Europe and Asia or Russia and the Middle East, but rather as an important and fascinating place in its own right.

* See the comments in this About.com geography page, which takes on the question: “Georgia, Armenia, and Azerbaijan in Asia or Europe?”

** Five of the six leading college-level world regional geography textbooks in the United States, for example, place Georgia, Armenia, and Azerbaijan in the following regions: Russia, the Russian Realm, Russia and the Post-Soviet States, Russia and Its Neighboring Countries, and Russia and the Near Abroad. The sixth text, my own co-authored Diversity Amid Globalization, takes a different strategy, putting Azerbaijan in Central Asia while slotting Armenia and Georgia into a Russian-based region. I have never been happy with this expedient, which divides the Caucasus and tends to offend Armenians and Georgians.