The Circassian Mystique and Its Historical Roots 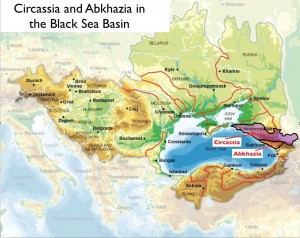 Although little known today, the Circassians were once a famous people, celebrated for their military élan, physical mien, and resistance to Russian expansion. In the nineteenth century, “Circassophilia” spread from Europe to North America, where numerous writers expressed deep admiration for the mountaineers of the eastern Black Sea. Prominent physical anthropologists deemed Circassian bodies the apogee of the human form. Promoters and hucksters capitalized on the craze, marketing a number of Circassian beauty aids and even creating fake “Circassian Beauties” to exhibit in circus sideshows. 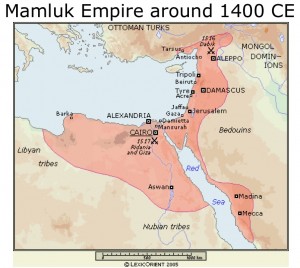 Although their mountainous homeland is noted for its rugged, isolating topography, the Circassians have long been well integrated into the wider world. Circassia fronts a large stretch of the Black Sea, an area that has attracted merchants and settlers from the Greek world and beyond since antiquity. In the later Middle Ages and into early modern times, Genoese traders frequented the Circassian coast. Politically, the region is usually depicted as backwater, as the Circassians never created a powerful state of their own. Yet they were no strangers to statecraft at the highest levels, having largely run the Mamluk Empire of Egypt from 1382-1517. Even after their defeat by the Ottomans, Circassians continued to form much of Egypt’s political elite. Ostensibly their power came to an end in 1811 when Mohammad Ali massacred most of the Mamluks. Still, as Kadir Natho argues in Circassian History

, Circassians later reclaimed important Egyptian military and administrative positions. Vestiges of their clout in North Africa linger to this day. As Qaddafi’s power was tottering in 2011, his agents reached out to the remnants of the Circassian community of Misrata, hoping to rally its members to the Libyan regime.

Admiration for Circassian beauty and bravery in the West was widespread during the Enlightenment. Voltaire took it for granted that Circassians were a comely people, a trait that he linked to their practice of inoculating babies with the smallpox virus. In the nineteenth century, Johann Friedrich Blumenbach, the founder of physical anthropology, invented the concept of the “Caucasian race” partly in reference to the Circassians. He reckoned that the peoples of the Caucasus, particularly the Circassians and Georgians, represented something close to the ideal human form, having “degenerated” less than others since the creation. Early anthropologists thus sought to elevate Europeans by linking them to the Circassians in a common racial category.

“Circassophilia” in the English-speaking world is often said to date to the Crimean War (1853-1856), when the British were allied with the Circassians against the Russian Empire. But travel accounts show that the attitude has deeper roots. Admiration for the Adyghe people stemmed in part from the general respect accorded to independent mountain peoples who resisted eastern empires, which in turn was linked to the disdain that most Westerners felt for Asian—and Russian—civilization. Still, the esteem granted to the Circassians in many of these works went well beyond the norm. Consider, for example, Edmund Spencer in Travels in Circassia, Krim Tatary, Etc., (1836):

It was also the first time that I had seen the Circassians mingling on friendly terms with the Russian soldiers; and assuredly a more striking contrast than the two people presented, both in physical appearance and moral expression, it is impossible to conceive. The one, with symmetrical forms and classic features, seemed breathing statues of immortal Greece; the other, coarse-looking, short, and thick-limbed, appeared like an inferior race of beings. But if the physical line of demarcation was broad, the moral was still broader. The mountaineer, free as the eagle on the wing, stepped and moved, as if proudly conscious of his independence, with a dauntless self-confidence not unmixed with scorn, that none but a child of liberty could exhibit in his bearing…  (p. 291).

Both the Circassian reputation for beauty and their heritage of holding political power outside of their homeland stemmed in part from their curious niche in the political economy of the Middle East. The Circassians, to put it bluntly, specialized in providing elite slaves for the powerful states of the eastern Mediterranean world. Mamluks, literally meaning “slaves,” were men recruited in bondage to serve as elite fighters but who later turned the tables and took over the state itself, after which they continued to replenish their own ranks by importing slaves from the homeland. Circassians were by no means the only Mamluk soldiers of the Muslim world, but they were the dominant group in Egypt over an extended period of time.

Circassian women were equally renowned as high-status slaves, particularly in the Ottoman Empire. Many, of course, did not reach elevated standing, and the oppression that they could experience was likely extreme, but many Circassian women ended up in the imperial harem, a center of real political clout. Those whose sons went on become sultans could exercise substantial power in their own rights. Elite Circassian wives, moreover, were not limited to the imperial family. As Reina Lewis writes, “In 1870, Sir Henry Elliot, the British ambassador to Istanbul, realized how indelicate it might be to raise the subject of Circassian slavery since the grand vizier’s Circassian wife had been a slave and so had been or were the wives of many other important officials”  (p. 132).

The reasons for Circassia’s intensive participation in the slave trade are debated. Some writers stress the poverty, crowding, and deep class divisions of the region, which compelled the poor to sell their children. Others counter that the trade was largely voluntary: “it would seem that maids were seldom forced into bondage, instead they themselves opted to enter into this state out of goodwill. They were lured by tales of opulence and luxury in the harems, in which their legendary beauty was at a premium.” Historian Charles King, in his engaging history of the Black Sea, recounts an episode in which six female slaves on a transport vessel intercepted by a Russian warship refused liberation, preferring to take their chances in the slave markets of Istanbul (p. 118).

Whatever its propelling factors, the slave trade deeply influenced social relations in Circassia. According to the British writer John Longwort (in A Year Among the Circassians [1840]), commoners were often unabashedly assessed in terms of market valuation:

When you hear of their being so many hands high, or worth so many purses, you naturally conclude that they are cattle being spoken of. A Circassian has original notions on the subject: both men and women have their value as property … and it may be some consolation to the latter to know, that with any pretension to beauty, they have ten times the value of the former (p. 57). 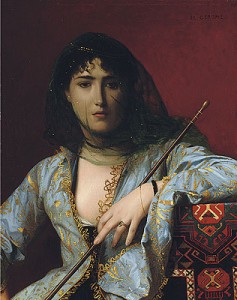 The stereotypical beautiful Circassian woman had dark luxuriant hair juxtaposed against smooth, pale skin. As a result, Circassian-branded hair and skin products came to be widely marked in Europe and the United States. Such connotations even made their way to gastronomy; the dish called “Circassian Chicken” is named not for its place of origin, but rather for its smooth texture and light color. By the late 1800s, “Circassian Beauties” had become circus attractions in the United States; such “performers” were not from the Caucasus, but were rather local woman of light complexion who dyed their hair and then teased and coiffed it into elaborate halos. Charles King again provides insight (in The Ghosts of Freedom, pp. 138-140), noting that Phineas T. Barnum himself took credit for “introducing the Circassians into American popular culture.” The appeal, King shows, was primarily erotic, as the so-called Circassian Beauties would recount to the crowds the “the prods and examinations” that they had experienced “in the slave bazaar.” The origin of their hairstyle is less clear; King suggests that it might have been derived either from the “tall, fuzzy hats” worn by the men of the Caucasus, or from an attempt to “Africanize”—and thus further sexualize—this quintessential Caucasian people. What is clear is that Western marketers of Circassian themes often had no idea what they were selling, as is evident in the French “Koringa” poster reproduced here. 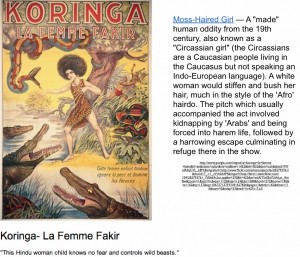 Besides their innate physical traits, posture and bearing also played a role in the Circassians’ reputation for beauty. As numerous videos on the internet confirm, Circassian dancers typically hold their bodies in a strikingly upright manner. John Longwort noted the same characteristic in everyday life while sojourning in the region in the early 1800s. As he wrote of one local woman, “She was tall and well, though slightly, shaped, and held herself, like all Circassians, men or women, very erect” (p. 59). 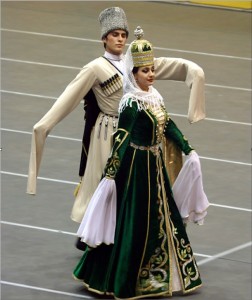 As the Circassians seek to maintain their identity and bring their situation to global notice, the traditional Circassian modes of dance and dress are increasingly cultivated and disseminated on the internet. Graphic artists are also developing visually arresting Circassian themes and motifs. It will be interesting to see whether the Circassian cause and style re-enter the Western consciousness as the Sochi Olympics approach. 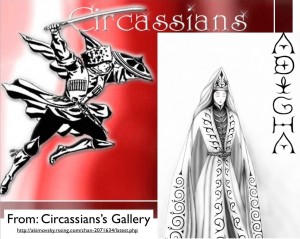 King, Charles. The Ghost of Freedom: A History of the Caucasus