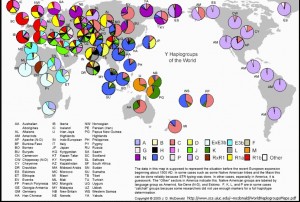 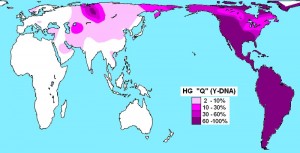 Mainstream anthropological thought has long assumed that the first settlers of North and South America derived from Siberia, moving over the exposed land-bridge of “Beringia” during the last glacial episode and then spreading south once the continental glaciers began to recede. Alternative theories, however, have proposed additional migration streams originating from Europe or passing from eastern Asia through the north Pacific by watercraft. Genetic studies, however, strongly support the Siberian hypothesis. Y-chromosome DNA analysis, for example, reveals that a substantial majority of Native American men belong to the otherwise fairly rare haplogroup Q, which also happens to be common in Siberia, especially among some of the smaller indigenous groups.  Haplogroup Q reaches an astoundingly high 95 percent frequency among the Ket, but this could represent genetic drift, as the Ket population is very small (around 1,500). 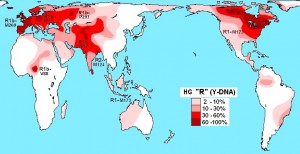 The Y-DNA Haplogroup R1 is the second most important haplogroup among the indigenous peoples of the Americas. Its frequency is highest in the Americas among the Algonquian peoples of the northeastern United States and eastern Canada. Although rare in eastern Siberia, R1 is widespread among certain south-central Siberian groups. Whether haplogroup R1 among certain Native American groups came from south-central Siberia or is a result of recent European admixture remains uncertain. 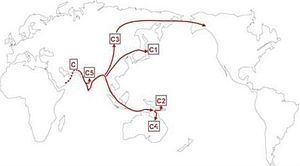 The third major Y-DNA haplogroup found among Native Americans is haplogroup C, which is also relatively widespread in Siberia. Haplogroup C is even more common in the Pacific and among indigenous Australians; some scholars associate haplogroup C with the first out-of-Africa migration that took a coastal route along Southern Asia and into Southeast Asia and Australia some 50,000 years ago. However, American Indians (especially some Na-Dené-, Algonquian-, or Siouan-speaking populations), Siberians, and Central Asians share the more restricted C3 sub-haplogroup, while many Pacific groups have the C2 sub-haplogroup and Australians Aborigines the C4 sub-haplogroup.

Several relatively recent genetic studies seek to clarify the relationship between the indigenous peoples of the Americas and those of Siberia. A 2007 report, for example, located an American “north-to-south gradient of decreasing similarity to Siberians”: the closer the location of a given Amerindian group to Siberia, in other worlds, the closer the genetic connection. As specified by the authors, “Genetic similarity to Siberia is greatest for the Chipewyan population from northern Canada and for the more southerly Cree and Ojibwa populations. Detectable Siberian similarity is visible to a greater extent in Mesoamerican and Andean populations than in the populations from eastern South America.” The fact that western South American Indian populations have closer genetic affinities to Siberians than those of eastern South America is offered as evidence that the original human migration to South America occurred along the Pacific Coast. The greater linguistic diversity along the Pacific Coast further supports the theory that the initial peopling of the Americas proceeded north to south along a Pacific coastal route. 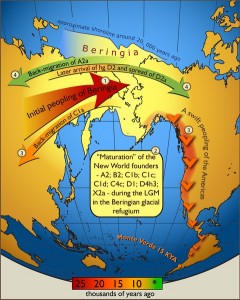 The movement down the Pacific Coast could have been relatively rapid. Another 2007 study, for example, found evidence that the ancestors of the Native Americans lived for many thousands of years in relative isolation in Beringia, during which time they experienced a number of genetic changes. Some of these people evidently migrated back into Siberia, where their genetic signatures can be seen today, especially among the Evenks and Selkups. The authors go on to argue that “after the Beringian standstill, the initial North to South migration [in the Americas] was likely a swift pioneering process, not a gradual diffusion, … [and] was followed by long-term isolation of local populations.” This long-term isolation further contributed to linguistic diversification in the Americas. 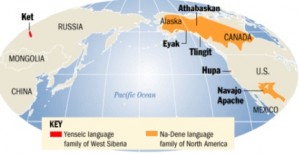 The initial peopling of the Americas from this ancestral Beringian population appears to have been only the first of three “Siberian” migrations to the Western Hemisphere. Linguistic and other lines of evidence have long suggested that the Na-Dené people (those who speak Athabascan and related languages) came in a second wave, perhaps around 8,000 BCE. Intriguingly, the Na-Dené languages have been linked to the Ket language of central Siberia by linguist Edward Vajda. This Dené-Yeniseian hypothesis remains controversial, although it has received stronger support than the wildly speculative “Dené–Caucasian” theory, proposed by Russian scholar Sergei Starostin, which posits a macro-family encompassing “the Sino-Tibetan, North Caucasian, Na-Dené, and Yeniseian [Ket] language families and the Basque and Burushaski languages.” Most linguist continue to treat Ket, Basque, and Burushaski as isolates; Sino-Tibetan and Na-Dené as separate language families; and North Caucasian as two (or even three) separate language families. Genetically, the Na-Dené show some particularities that also indicate that their “migration occurred from the Russian Far East after the initial Paleo-Indian colonization.” A third migration stream from Siberia to the Americas, that of the ancestors of the “Eskimo-Aleut” peoples, seems to date back to around 4,000 BCE, according to both linguistic and genetic evidence. 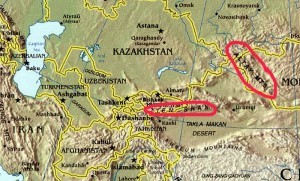 As mentioned above, some Y-DNA markers show a closer connection between Native Americans and the indigenous inhabitants of south-central Siberian than those of the northern or eastern parts of the region. The same is true for certain mitochondrial DNA markers, which show descent along the maternal line. A major study published earlier this year specifically indicates strong genetic linkages between American Indians and the indigenous inhabitants of the southern Altai Mountains, a rugged area situated near the intersection of southern Siberia, western Mongolia, and eastern Kazakhstan. As the authors argue, “The Altai region of southern Siberia has played a critical role in the peopling of northern Asia as an entry point into Siberia and a possible homeland for ancestral Native Americans.” 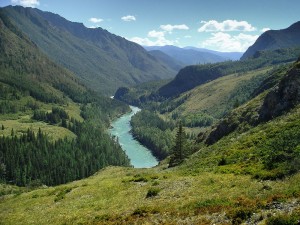 The genetic linkage between Native Americans and the peoples of the Altai Mountains may seem surprising, as the Altai Range is located far from Beringia. But as has been explored in previous GeoCurrents posts, mountains often act as refuges, places where old patterns, cultural and genetic, are able to persist. In more open landscapes, mass movements of people are more easily able to introduce new elements and rearrange preexisting configurations. Relatively isolated mountain valleys, such as those of the Altai, were often largely bypassed by such movements.

Yet such isolation was rarely if ever absolute. Turkic languages, for example, eventually spread through the Altai Range, displacing languages of other families. Some scholars have suggested that the Turkic linguistic family itself originated in the Altai region, and the linkage of the region to the putative language family* that includes Turkic, Mongolian, and Tungusic is reflected in its very name: Altaic. The Altai Mountains may even have played a role in the history of the Indo-European language family. In the Bronze Age (circa 1500 BCE), horse-riding nomads originating near the Altai seem to have spread their burial sites over a huge region extending from Finland to Mongolia. Although this so-called Seima-Turbino Phenomenon is still widely regarded as a cultural enigma, some scholars have argued that its carriers were Indo-European speakers. A 2009 Human Genetics article further contends that in “the Bronze and Iron Ages, south Siberia was a region of overwhelmingly predominate European settlement,” inhabited by “blue (or green-) eyed, fair-skinned, and light-haired people.” Perhaps that was the case across much of the lowland belt of south-central Siberia, but a different situation would probably have obtained in the hidden valleys of the Altai Mountains.

*As discussed in a previous GeoCurrents post, “Altaic” is probably not a genuine language family derived from descent from a common ancestral tongue.