Sakha (Yakutia) Since the Fall of the Soviet Union 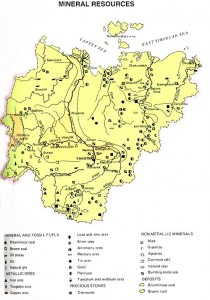 The past several GeoCurrents posts have examined the history of the Russian Republic of Sakha, formerly and informally referred to as Yakutia. We have focused on Sakha due both to the region’s intrinsic interest and to the fact that it is one of the most widely ignored sections of the Earth’s surface. Today’s post concludes this series within a series by examining Yakutia since the fall of the Soviet Union. Several additional posts later this week will conclude the larger series on Siberia.

With the demise of the Soviet Union, Sakha, like the rest of the vast country, underwent a wrenching transition. The leaders of the Republic tried to take advantage of the confusion to realize their long-standing desire for independence, and therefore declared Yakutia’s sovereignty in 1991. Such a declaration had little significance, but during the rest of the decade Sakha did achieve an unaccustomed degree of political and economic autonomy. By the late 1990s, John Tichotsky could write that, “In the area of regional sovereignty, Sakha is the leader among all of Russia’s political units” (p. 227).

The post-Soviet transition also brought major economic changes. Industrial production plummeted; according to Tichotsky, of all Soviet regions only Kamchatka experienced a greater decline. Personal income dropped as well, and the average life expectancy slipped by three years. As state farms were broken up and herds privatized, livestock was slaughtered with abandon, temporarily increasing meat consumption. But as Tichotsky also specifies, Sakha experienced a more rapid economic recovery than the other parts of the former Soviet Union. Driven mainly by diamond mining, the republic matched and then surpassed its previous level of economic output. In 1995, almost half of its industrial production derived from diamond mining. Currently, Sakha is considerably richer than Russia as a whole on the basis of per capita GRP (Gross Regional Product), with 2009 figures of $18,955 and $12,339 respectively. But such apparent wealth by no means benefits all the people of Sakha. As is true elsewhere in the former Soviet Union, the end the communist system generated both winners and losers. Pensioners in particular have suffered, as their allotments have failed to keep pace with inflation. 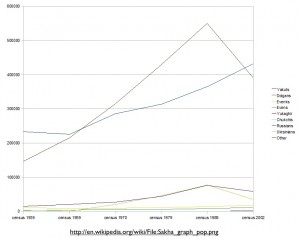 The end of the Soviet system also resulted in the demographic transformation of Yakutia. In 1989, the Sakha were a minority within their own republic, accounting for thirty-three percent of the region’s total population, as opposed to the fifty-seven percent constituted by Russians and Ukrainians. As can be seen in the Wikipedia graph posted here, the Russian population dropped sharply after the political transition, as large numbers of Russians abandoned the harsh land of Yakutia in favor of larger cities and milder climes. At the same time, the Sakha  ethnic population continued to grown, due mainly to a relatively high birth rate. This trend continues: according to the 2002 census, the Sakha then numbered 432,290, constituting 45.5 percent of the republic’s population; in 2010, they totaled 466,492, coming in at 49.9 percent. Other indigenous ethnic groups also expanded in the same period; the Evenks, for example, increased from 18,232 to 21,008 and the Yukaghirs from 1,097 to 1,281. Russians, Ukrainians and Tatars, on the other hand, all registered population declines in the republic from 2002 to 2010. 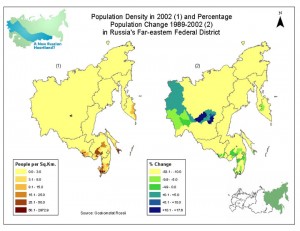 Although the Sakha population increased during the post-Soviet period, most rural areas of the republic witnessed significant declines during the same period. The Soviet government had subsidized life in the villages, and when the state farms were discontinued and the subsidies came to an end, rural life became less rewarding. Transportation links to rural areas also deteriorated, due especially to the end of subsidies for aviation fuel. As a result, the Sakha began moving to Yakutsk and the republic’s other towns in significant numbers. Bella Bychkova Jordan and Terry Jordan-Bychkov specify how such changes played out at the local level. In the village that they studied:

It is the younger people who leave, seeking economic opportunity in cities such as Mirny and Yakutsk. Young women emigrate in grater numbers than young men. The number of weddings fell from twelve in 1992 to only one in 1995 and two in 1998. As a consequence, Djarkhan’s population is increasingly elderly. P. 89

As Yakutia is once again becoming a primarily Yakut region, Sakha nationalism shows signs of revival. As previously noted, nationalism in the region is nothing new, dating back at least to the early 1900s. It was also deeply repressed for most of the 20th century. As Tatiana Argounova-Low argues in a new book, The Politics of Nationalism in the Republic of Sakha (Northeastern Siberia) 1900-2000, “the concept of nationalism was a force used by [Soviet and Russian authorities] to suppress thought, particularly in Sakha…” Accusations of natsionalizm, she argues, were used to target and scapegoat certain individuals, and to “disguise and prevent discussion of a range of complex social, political and ethnic issues.” With the downfall of the Soviet Union and the threat of continued devolution in the 1990s, the “national question” in Sakha gained new urgency. Local leaders have continued to push for more autonomy, and the desire for independence has not disappeared.

As Anna Stammler-Gossmann argues, efforts have been made to develop a new “Yakutiane” identity that could unite the various peoples of the republic within a single group, but success has been minimal. As she further specifies, Russian-speakers in Sakha frequently refer to themselves as “Siberians,” whereas the Yakuts and the other indigenous Siberians almost never to do so, preferring instead their own ethnic designations. National identity is obviously a fraught subject in contemporary Sakha, yet in general terms, relations among the republic’s various ethnic groups have remained reasonably peaceful. 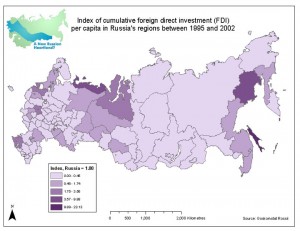 Through the 1990s, Sakha Republic remained averse to foreign investment and the development of large-scale private enterprise. The economy remained under the domination of the state, which focused on the mining sector, and especially on diamonds. As Tichotsky noted in 2000, “Any sector of the economy that that is considered essential to the region is controlled completely or partially by the Sakha government” (p. 227). Tichotsky described the republic’s government as highly inward looking, almost proud of the fact that that foreign investment in the region was negligible.

More recently, such anti-global policies and attitudes have changed to a considerable degree. According to Yakutia Today, “The Republic is second after Sakhalin Oblast among Far East’s regions by volume of foreign investments.” The same article trumpet’s Sakha’s rapidly growing international trade, noting that it has established commercial representation in a number of other countries, including China, South Korea, Japan, and Germany. Connections seem to be strongest with South Korea. Outside of the former Soviet Union, Yakutia Airlines flies regular, non-seasonal routes to three cities: Ulan Bator (Mongolia), Harbin (China), and Seoul (South Korea). 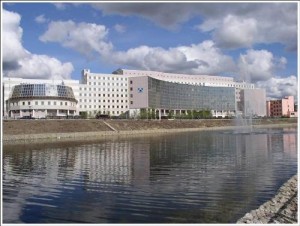 Recent news reports seem to bear out Sakha’s tentative transformation to an open, forward-looking economy. Its government, for example, recently announced that it was seeking venture financing to help establish a “tech park” in the center of Yakutsk. Such a facility would focus on the “venture capital company Yakutia, the center for protection of intellectual property of the Academy of Sciences of the republic, as well as consulting and servicing firms.” Any such developments would be facilitated by the presence of the North-Eastern Federal University, formerly Yakutsk State University, which is noted for its technical and scientific faculties. North-Eastern Federal University is also seeking to enhance foreign language instruction, especially of English. To this effect, it has recently partnered with the University of Tromsø in Norway to establish a teaching program based on distance learning, E-learning, IT technologies, and social networks.

Long-distance, “virtual” social interaction and mediation are increasingly popular in the lightly populated and vast republic. Even Sakha’s major beauty contest is now an on-line event: Miss Virtual Yakutia. The contest has not been without problems; in 2007, “scandal hit the Miss Virtual Yakutia contest this year, when it was revealed that one of the finalists… was a man.” Judging from a more recent YouTube “tribute” to the pageant, the contestants seem to be relatively evenly divided between ethnic Russians and Sakhas.

Argounova-Low, Tatiana. 2012. The Politics of Nationalism in the Republic of Sakha (Northeastern Siberia) 1900-2000. Edwin Mellen Press