For the next month or so, GeoCurrents will examine Siberia. Siberia is an important yet often overlooked region, and hence merits extended consideration. Few parts of the world are so consistently ignored, at least in the English-language media, which  almost always focuses on the western, or European, parts of Russia, particularly Moscow, St. Petersburg, and the troubled North Caucasus. Thus, in most people’s imagination, in the West and even in Russia itself, Siberia looks like an iceberg: big, cold, mostly hidden from view, and inherently dangerous. In this series of posts, GeoCurrents aims to shed new light on this vast and significant place. If Siberia were independent, it would have the largest area of any country in the world—by a 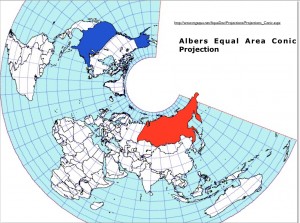 significant margin. In terms of population, its position is not nearly so high, coming in 31st or 32nd place. But with roughly forty million inhabitants, Siberia is significantly more populous than Canada, which has 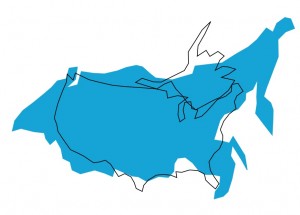 about thirty-five million people. A sovereign Siberia would also be a much wealthier place than Russia on a per capita basis: Russia’s economy relies heavily on natural resources, and Siberia has the lion’s share. 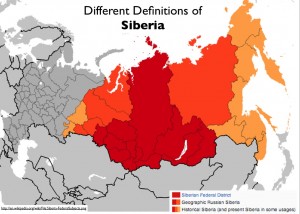 The definition of Siberia employed here, it is important to note, is the maximal one, covering all of Russia located to the east of the Ural Mountains, which are generally regarded as the division between Europe and Asia. In Russia itself, this view of Siberia is often considered to be of historical significance only. According to the Wikipedia, “Soviet-era sources and modern Russian ones” usually exclude the Pacific coastal region from Siberia. Watershed boundaries are now often employed, with “Siberia” designating those areas that drain into the Arctic but not the Pacific Ocean. On the western side of “Asiatic Russia”, the area just to the southeast of the Urals, encompassing Sverdlovsk and Chelyabinsk oblasts, is sometimes counted as part of Siberia but sometimes excluded. It should also be noted that the Siberian Federal District, one of eight large, quasi-administrative units of Russia, includes only the central portion of traditional Siberia. Intriguingly, this restricted “Siberia” excludes the region that originally lent its name to the vast region. That name derives from the Khanate of Sibir, one of the successor states of the “Golden Horde”, or Kipchak Khanate, which was itself one of the successor states of the Mongolian Empire established by Genghis Khan. The defeat of

Sibir by the Cossack leader Yermak Timofeyevich in 1582 is generally considered to mark the beginning of the Russian conquest of Siberia.

We have adopted the most extensive definition of Siberia because it remains standard in most English-language sources. Yet we do not intend to cover the entire region, as it is far too extensive. Instead, we will select a number of specific topics focused on various parts of Siberia for extended consideration. 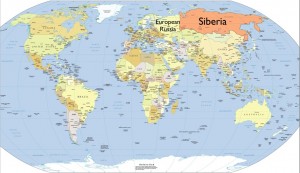 Our first group of Siberia posts will examine the indigenous peoples and cultures of the region. As usual, linguistics and linguistic geography will figure prominently here. After a brief survey of the entire region, more extended consideration will be given to several ethnic groups and their languages. We shall see that many groups struggle to maintain their identity and their indigenous language, with the Itelmen of the Kamchatka Peninsula being one of the most desperate examples. The Sakha (Yakut) will also be examined in some detail, and we hope to look at the historical relationship between the Sakha and Russian exiles. Another post will examine the Chukchi people of the far northeast, taking on the ubiquitous Russian humor genre centered on this ethnic group. As we shall see, “Chukchi jokes” tell us very little about the Chukchi but much more about the joke-tellers themselves (a separate GeoNote will examine the more general phenomenon of jokes targeting specific nationalities or ethnic groups across the world).

We will subsequently move from cultural and linguistic matters to demographic ones. Continuing exploitation of natural resources in some areas of Siberia and the Far East attracts workers, especially men, creating more balanced sex ratios than elsewhere in Russia. But many other regions experience demographic problems of gargantuan proportions: death rates, including suicide and infant mortality rates, are higher than anywhere else in Russia; birth rates are plummeting; and sex ratios are heavily female-biased. Areas of former forced labor camps, particularly Magadan Oblast, are still riddled with crime and depopulating rapidly. Health issues will also be explored in this section, with particular attention given to problems cause by the region’s intense winter cold, as well as pollution from industrial sites, uranium mining, and nuclear accidents, such as the 1957 Kushtym disaster near Chelyabinsk, the world’s third worst nuclear accident of all time. Biological adaptations to low temperatures among the indigenous peoples of Siberia might also be examined.

The next set of posts will turn to environmental and economic issues. We shall see that intensive exploitation of Siberia’s natural resources leads to environmental degradation, which not only destroys the many diverse ecosystems of the region and the natural habitats of many endangered species, but also threatens the livelihoods of more than forty distinct indigenous groups. Here we will examine the development of oil and gas fields off Sakhalin Island, as well as the mining of gold, diamonds, and other minerals in Yakutia (Sakha) and elsewhere. The mines and heavy-metal contamination in Norilsk in northwestern Siberia will also be scrutinized, as will the movement toward sustainable forestry in some parts of the region. The environmental series of posts will conclude with an examination of the ambitious “Pleistocene Park” of northern Sakha (Yakutia), which aims to recreate the long-lost grassland environment of Siberia by reintroducing large herbivores. If all of the plans for this park come to fruition, such large mammals could someday even include wooly mammoths.

The final set of posts will turn to geopolitics. Here we will look at issues of nationalism and regionalism in the region’s autonomous republics, and in Siberia more generally. Russia’s dispute with Japan over the Kuril Islands might also be considered. Another possible topic here is the incongruous Jewish Autonomous Oblast of Birobidzhan.

Our schedule of posts remains rather flexible; as we work on a particular issue, we may not be able to resist delving into related matters. If readers have strong ideas about topics that they would like to see covered, their input is welcome.