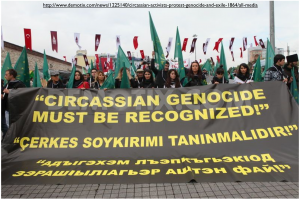 When lecturing on the Caucasus last fall, I asked my Stanford students if any of them had ever heard of the Circassians. Out of a class of roughly 100 students, two raised their hands. I then told that class that the Circassians had once been an extremely well known if often misunderstood ethnic group, and I predicted that by February 2014 they would again be in the news, owing to the fact that the Sochi Olympics would be held in their ancestral homeland. I trusted Circassian activists to get their story out, and I was reasonably sure that the mainstream media would pick it up, due both to the controversial nature of Russian ethnic policies and especially to the fact that Circassian history is both tragic and absolutely fascinating.

Thus far, I have been disappointed, as it seems that most mainstream media organizations are content to downplay if not ignore the Circassian issue. To be sure, several outlets have posted excellent articles on the topic, including Frankie Martin’s “The Olympics’ Forgotten People” on CNN and Kathrin Hille’s “Sochi Stirs Circassian Nationalism” in the Financial Times. (Of particular note in the latter article is the important but rather understated observation that, “Russia is working on a new set of history textbooks after Mr. Putin demanded they be reworked to present a unified set of evaluations and reflect a more patriotic world view. Circassian hopes to have their full story told could collide with this.”) In an interesting article in Time magazine, Ishaan Tharoor appropriately characterizes the Circassians as “a forgotten community.” (See also this article in The New Republic.)

Most news organizations, however, apparently prefer to ignore or downplay the issue. A Washington Post video entitled “The Sochi Olympics, Explained in Two Minutes,” for example, fails to mention the Circassians. An NBC article on a hacking attack on the Russian media does mention the group, but just barely, claiming that, “the official Twitter feed of Anonymous Caucasus said the action was a protest at the 19th Century deportation of thousands of native Circassians from the region.” The implication that mere “thousands” were merely “deported” is both misleading and insulting: in actuality, hundreds of thousands were brutally expelled, with many dying in the process. 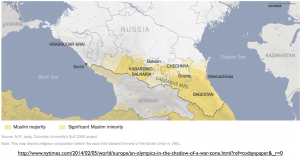 An important February 5 article in the New York Times, “An Olympics in the Shadow of a War Zone,” Steven Lee Myers does a reasonable good job of explaining the situation in Chechnya, and we are pleased that his article used a modified GeoCurrents language map in its on-line version. But the article still fails the Circassians, dispensing with their situation as follows: “Many of the ethnic groups in the Caucasus are related to the Circassians, who consider Sochi part of their homeland, conquered by the Russians in the 19th century after what activists today hope to publicize as an act of genocide.” Unfortunately, the characterization is again misleading if not simply inaccurate. The vast majority of the ethnic groups of the Caucasus are not “related” to the Circassians in any sense other than that of living in the same general area, and the Russian conquest of the area came before not “after” the events that most Circassian activists consider genocidal. The religion map that accompanies the article (in the on-line version), moreover, fails to show a Muslim minority in the Russian Republic of Adygea, which forms something of a rump homeland for a mostly Muslim Circassian group. (Adygea is actually only about a quarter Circassian by population, and, according to official statistics, about 13 percent of its population is Muslim.) The New York Times map is based on the comprehensive cartography of M. Izady, but unfortunately Izady’s map does not extent far enough to the northwest to include Adygea. 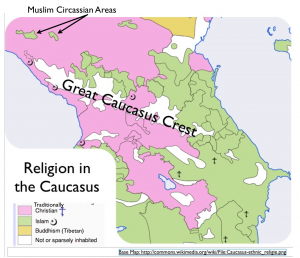 The New York Times article in question focuses on Islamist militants in Chechnya and Dagestan, which is understandable at one level, given the security threats that they pose. But Sochi is relatively far from Chechnya and Dagestan, and, as the Times own maps show, the Sochi region has seen few terrorist attacks or insurgent strikes. Historical Circassia, on the other hand, encompasses Sochi and its environs. Equally important is the fact that the Circassian strategy has been, as far as I can tell, completely non-violent, in utter contrast to the situation in Chechnya. Surely that is noteworthy in its own right. If news source chose to highlight violent responses while ignoring non-violent ones, a perverse message is seemingly sent: “If you want our attention, kill someone!”

Regardless of such ethical considerations, the saga of the Circassians is a fascinating story. As outlined in earlier GeoCurrents posts, the Circassians were once famous over in many areas for their supposed physical beauty and regal bearing. They also filled an unexpected but highly significant historical role as elite slaves, both male and female, in the Ottoman Empire and Mamluk Egypt. (It would take a dull mind indeed not to find the topic of “elite slaves” intriguing!) The ability of Circassians to rise to relatively high positions in the Ottoman Empire and subsequently in Turkey, Syria, and Jordan is also of some interest. The current plight of the 40,000 to 130,000 Circassians in Syria, moreover, is grossly under-reported in the global media. Religion among the Circassians is another captivating topic. Although most Circassians are Sunni Muslim, conversion came relatively late and, according to some sources, was somewhat superficial in some areas. Of significance in this regard is Adyghe Khabze (or Xabze) the traditional ethnic “code of conduct,” described on one Circassian website as “the epitomy of Circassian culture and tradition.” Most interpretations view Adyghe Khabze as a secular institution that is not at all incompatible with Islam, but the Wikipedia article on the subject portrays it as a religion in its own right, influenced by ancient Greek philosophy. The same article also claims that an Adyghe Khabze movement is growing rapidly, and that some of its leaders have come under deadly attack from Sunni extremists. A 2010 report by the Jamestown Foundation claims that “some observers detected in the latest killings [of an Adyghe Khabze advocate] in Kabardino-Balkaria an attempt by Moscow to play off Circassian nationalists against the Islamists.”

I would be very interested in readers’ ideas about why the Circassian issue has failed to gain the attention of most major news organizations. I suspect that the one reason is that many reporters and editors feel that the story is simply too complicated, and that as a result they fear that it would unduly burden their readers. The storyline of the Caucasus that the media has embraced focuses on extremism and violence in Chechnya and environs, and thus has little room for anything that would complicate that accepted narrative. Such tunnel vision seems to apply to other parts of the world as well. Thus in Sudan, the media periodically reports on Darfur, but hardly ever mentions the on-going horrors of the conflict in the Nuba Hills (South Kordofan)– despite the fact that George Clooney has struggled to bring it to global attention. And Sudan’s Eastern Front rebellion receives even less attention.

If this interpretation has any merit, the situation is most unfortunate. The reading public deserves more comprehensive information, and the failure of the mainstream media to provide it is perhaps one reason why many established news organizations are declining, while the often-disparaged “blogosphere” continue to rise.