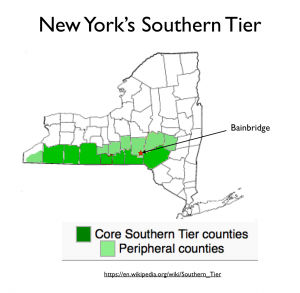 A new drive to divide the state of New York, separating the “Upstate” region from metropolitan New York City, is gaining visibility both within the state and nationally. On Sunday, August 30 a secession rally organized by more than a dozen groups was held in the town of Bainbridge (population 3,300) in New York’s Southern Tier, the movement’s core area. Some secessionists would like to split New York into two states and others would rather transfer the Southern Tier counties to the neighboring state of Pennsylvania. Either option would be difficult to accomplish owing to 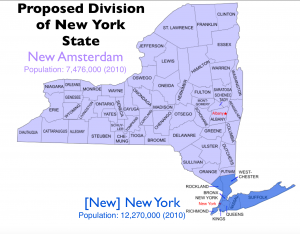 constitutional issues. Realizing such problems, the “Divide NYS” organization wants to retain a single state but divide it into two “autonomous” regions, one in the south, which would retain the name “New York,” and another in the north, which would be called “New Amsterdam.” As the organization’s website puts it:

The state of New York really should be two separate regions, The New Amsterdam Region and the New York Region; which is almost the same as being separate states! Since Congress is unlikely, in the foreseeable future, to give the Northeast two more US Senate seats a new state would require; our autonomous regions method is more likely to succeed!

Numerous proposals to divide New York have been put forward in the past, most of which are based on the cultural, economic, and political differences that separate Upstate New York from New York City and its greater metropolitan area. As framed by the Divide NYS website:

The State of New York contains a tremendously diverse population and is unique in its dichotomy. The overwhelming majority of the state consists of small to medium sized communities set in a rural and suburban climate; generally conservative values blend with moderate liberal ideals to create a unique political platform. Meanwhile, the downstate counties that make up New York City are significantly more liberal leaning in their values and are world famous for the size and power of the most significant city in the world.

It is equally unfair to both upstate and downstate residents to share a representative government; the vast differences in lifestyle and aspirations demonstrate that both downstate and upstate should have their own autonomous governments so as to more effectively serve their constituents. 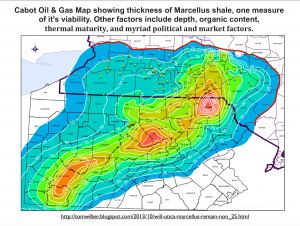 Most observers think that the current push to split the state is driven mostly by economic and environmental considerations, particularly high taxation rates and New York’s ban on fracking. But in Upstate New York overall, popular sentiments in regard to such issues remain highly mixed. According to recent Quinnipiac polling, 55 percent of the residents of Upstate New York support the ban on fracking. That is not the case, however, in the Southern Tier, a relative poor area that sits over the gas-rich Marcellus Shale Formation. As was recently reported in Syracuse.com:

The Upstate New York Towns Association feels pushed to the limit by high property taxes, low sales tax revenue and Gov. Andrew Cuomo’s decision to ban hydraulic fracturing in the state. This combination has driven them to research whether leaving New York to become part of Pennsylvania is a realistic possibility. “The Southern Tier is desolate,” Conklin Town Supervisor Jim Finch (R) told WBNG. “We have no jobs and no income. The richest resource we have is in the ground.” The ground in Conklin has natural gas in the Marcellus Shale, and Finch sees the ban as a violation of property owners’ rights. http:// 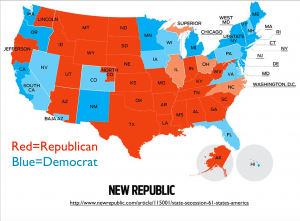 Although the differences between upstate and downstate New York are undeniable, it is not accurate to claim that the state is “unique in its dichotomy,” as does the “Divide NYS” website. In actuality, several states have more pronounced regional/political divisions than New York, most of which also have active state secession movements. A fascinating New Republic map from 2013 shows what the 2012 presidential electoral map would have looked like if the major secession movements had achieved success. As can be seen, most state splits would have benefitted the Republican Party, with new “red” states emerging in the form of Lincoln, Jefferson, Northern Colorado, Superior, and “Illinois without Cook County (Chicago].” In the case of New York, however, both new states would have remained firmly within the Democratic Party camp, with Barack Obama having beaten Mitt Romney by 8.9 percent in Upstate New York. 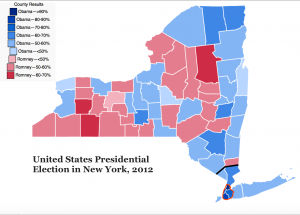 An examination of the 2012 presidential election in New York, moreover, fails to reveal a clear “upstate/downstate” political divide. As can be seen on the map posted to the left, the four main boroughs of New York City (encircled by the heavy red line) voted overwhelmingly for Barack Obama, but the rest of the downstate region (marked off by the heavy black line) 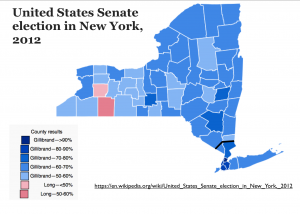 evinced a voting pattern almost indistinguishable from those of the eastern, far northern, and central portions of the state. In the 2012 senatorial election, moreover, the north/south divide disappears altogether in favor of an east/west division, as almost all counties in the eastern half of the state strongly supported the Democratic candidate, whereas in the west the same candidate triumphed by a much narrower margin. 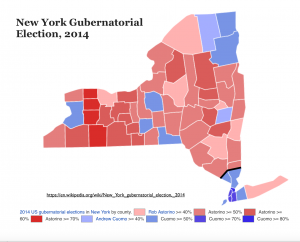 The electoral results of single year, however, can be misleading. In the 2014 gubernatorial election, the upstate/downstate division is more apparent. In this instance, almost all upstate counties supported the Republican candidate, with the exception of those located in the far northeast and those containing major cities (Albany, Syracuse, and Buffalo) or major universities (Cornell and Binghampton). In downstate New York, this electoral map, like most others, reveals a dark blue Democratic core (NYC) and lighter blue periphery (the Republican candidate did, however, take a plurality of votes Suffolk county in eastern Long Island, but fell short of gaining a majority).

In the final analysis, if New York were to be divided into two states, the 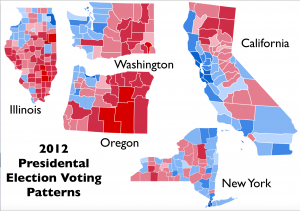 downstate successor state would be solidly blue, supporting Democratic candidates in almost all elections, whereas the upstate successor would likely be a “purple” swing state. Most other states with active secession movements are much more cleanly split into “blue” and “red” regions. Such strongly marked divisions will likely encourage the movement for state secession. Accomplishing this goal, however, will remain difficult, and as a result I would be surprised to see the emergence of any new states. I would be even more surprised, however, to see New York—or any other state—dividing itself into “autonomous regions.” There is, after all, a precedent for state division in the United States, as Maine, Vermont, and West Virginia emerged in such a manner. There is no precedent, however, for the creation of “autonomous” sub-state entities.