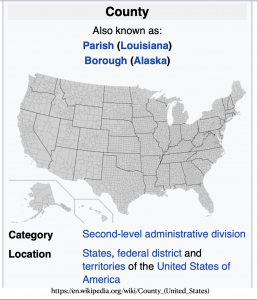 Recent GeoCurrents posts have examined county-level socioeconomic data, both for the state of Montana and the United States as a whole. Whenever I look at U.S. counties I am reminded of my father’s response when I told him that I wanted to pursue a Ph.D. in geography: “What does that mean? You’re going to memorize all the county seats?” Meant as a good-natured joke, his quip was telling, as it reflected the widespread skepticism of academia in the United States, the low reputation of geography as a scholarly discipline, and my own childhood proclivity for memorizing geographical information. It was also a comment on the perceived triviality of the county as a geopolitical unit. But U.S. counties are, at least in most parts of the country, anything but trivial. As recent posts have shown, counties are essential units for tabulating and recording information. When one wants a fine-grained depiction of any social or economic indicator in the United States, county-level mapping is usually the place to go. 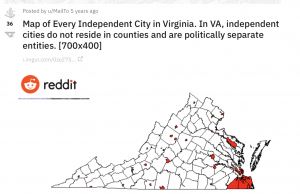 “County,” however, is not exactly the right word to denote the 3,243 basic subdivisions of the country’s 50 constituent states. Sticklers for precision insist on “county equivalent,” as Louisiana is divided into parishes and Alaska into boroughs and “census areas.”  Not all parts of the United States, moreover, belong to a county. Virginia has 38 “independent cities” that are primary administrative divisions of the state. St. Louis (Missouri), Baltimore (Maryland), and Carson City 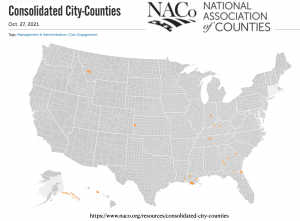 New York City is uniquely composed of several counties, as each of its five boroughs is also constituted as a county. Confusingly, for three of them the name of the borough differs from that of the county: Brooklyn is Kings County; Staten Island is Richmond County; and Manhattan is New York County. New York County is thus merely one part of New York City, inverting the normal city-county relationship. Many U.S. cities, however, are divided between two counties. Alabama alone counts 45 of these municipal anomalies.

The role and significance of counties varies significantly across the country. Wikipedia categorizes U.S. counties into three types: minimal scope, moderate scope, and broad scope. In most of New England, county scope is minimal indeed. In Connecticut, Rhode Island, and parts of Massachusetts, countries are no more than geographical designations used to tabulate information. Moderate scope counties, which have several essential functions, are found over most of the Mid-Atlantic and Midwestern regions. Broad-scope counties are typical of the West and South. As the Wikipedia notes: 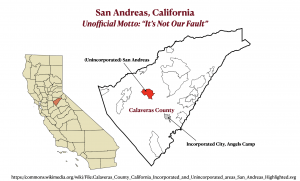 The “less populated” counties of the West and South may not provide all these services, but they are nonetheless very important. In rural areas with few or no incorporated cities, it is the county that provides local administration, with the county seat serving as the crucial center of governance. I mostly grew up in such a non-municipal administrative town (San Andreas in California’s Calaveras County) and can attest to the significance of its county-seat status. 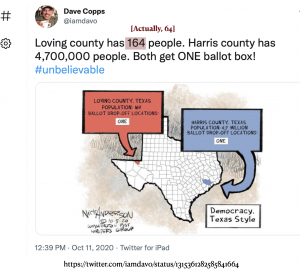 U.S. counties vary greatly in population. Los Angeles County, with 10,014,009 residents counted in the 2020 census, would be the country’s 11th most populous state if it were to secede from California. Contrastingly, Loving County in Texas had only 64 residents in 2020. I have some difficulty understanding how such a lightly populated area manages to function as a county. Evidently, it does not do so easily. As Texas Monthly reported in 1997:

Loving County residents are always thinking about the next election. Thirty-seven percent of the work force is employed by the county, mainly in elected positions. Elections are often knock-down-drag-out fights that have less to do with the issues at hand than the proclivity to “get caught in echoes of the past,” as one longtime resident puts it: the tangled web of family rivalries, personal vendettas, and enduring grudges among locals. Wide-open spaces don’t necessarily breed open minds; Loving’s spiteful, tribal politics have occasionally threatened to destroy the détente between the county’s families. “Years ago, when we found boot prints under Mother’s window, we knew it wasn’t prurience—it was politics,” says justice of the peace McKinley Hopper. “Although nothing’s more prurient than politics.

“Voter turnout is always a hundred percent, sometimes more,” says Hopper, who, as the 75-year-old patriarch of the Hopper clan, has witnessed plenty of election shenanigans. “Oh, there have been some red-hot lawsuits over voting! Some outlandish things have happened that made people madder than hornets. Texas Rangers have been brought in to view the whole thing, votes have been counted in an El Paso courtroom. People would ‘move’ to Loving County the night before Election Day and set up their bedrolls in different precincts. When my brother was sheriff, he showed up to vote once without his poll tax receipt. When he went across the street to get it, they closed the polls an hour early so he couldn’t vote.” 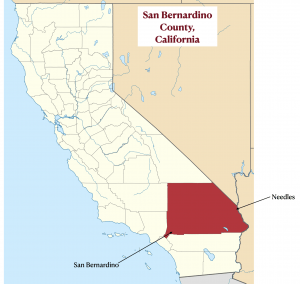 U.S. counties also vary greatly in terms of area. San Bernardino County, California, covers 20,105 square miles (52,072 km2), which means that it is significantly larger than the Netherlands. Contrastingly, Kalawao County, Hawaii, covers a mere 11.88 square miles. Problems can be generated by large county territories. San Bernardino’s seat, the city of San Bernardino, is located in the southwestern corner of the sprawling county, presenting a major inconvenience for people living in the town of Needles, 212 miles to the east. San Bernardino County itself has major issues with the state of California, its leaders complaining that they receive inadequate state funding. A secession measure will be placed before the county’s voters this November. As The Guardian  reports:

We need our state legislators to look at the return they are supposed to deliver to the people they serve,” she said. “We are one of the fastest-growing regions and it’s time to pay attention to that … We don’t have beaches, we don’t have all the skyscrapers but what we have is a family. We are a family-oriented county.” 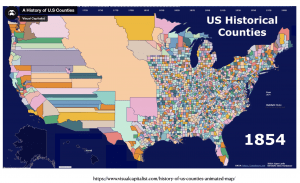 For those interested in the “trivialities” of county geography, Visual Capitalist has a remarkable animated map of U.S. county development going back to the early 1600s.