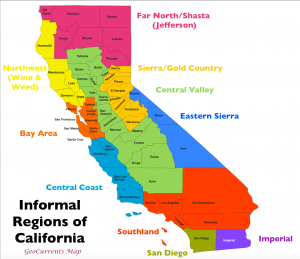 Today’s post continues and concludes the discussion of the county-level regionalization of California. We begin here with the Central Valley, one of the most distinctive aspects of the state’s physical geography. “Valley” is perhaps not the best term to describe this feature. I will never forget the words of Jung-man Lee, now a professor of geography at Seoul National University, when we visited the valley as graduate students in the 1980s. “Valley?,” he asked incredulously. “This is a not a valley, it is a vast plain!” 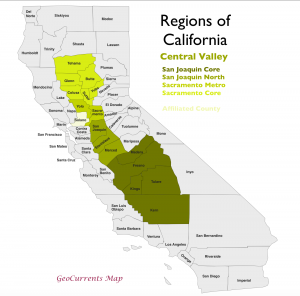 The Central Valley is characterized above all by its remarkably productive agriculture and its associated agro-industries, although it also includes many medium-sized cities. Of the top 10 agricultural counties (in terms of sales) in the United States in 2012, the Central Valley counted 7, while California as a whole counted nine 9. This region is characterized overall by low to medium wage levels, relatively high crime rates, 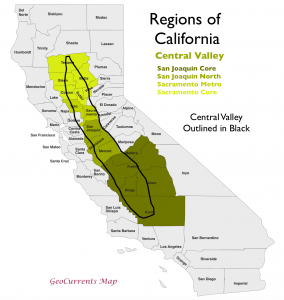 California’s Central Valley is clearly differentiated into several sub-regions. The major distinction is between the San Joaquin Valley in the south and the Sacramento Valley in the north, both of which are named after their main rivers. The San Joaquin is a much wider and 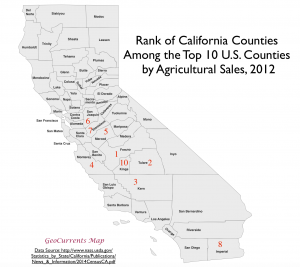 more agriculturally productive valley than the Sacramento. It is also more densely populated and more urbanized. 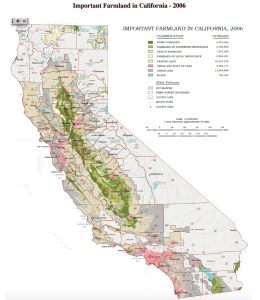 In regard to the Sacramento Valley, mostly urban Sacramento County (population 1.4 million) is clearly separated from the more conservative and rural counties to the north. I have appended neighboring Yolo County to the Sacramento sub-region, both because it is economically linked to it and because it is characterized by relatively left-wing voting patterns, owing largely to the presence of the University of California at Davis. Finally, I have marked Solano as an “affiliated county” because a substantial part of its territory is physically situated within the Central Valley and partakes in its agricultural economy. Portions of Contra Costa and Placer counties are also located in the Central Valley, but they are too small to merit inclusion on the map. 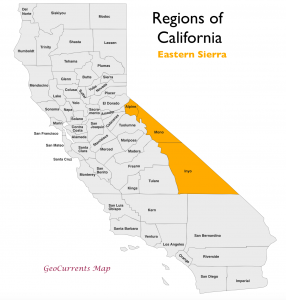 The next region that I have distinguished, “Eastern Sierra,” rarely appears in regionalization schemes, mostly because its population is so small (roughly 34,000). This is a sparsely settled area indeed, characterized by lofty peaks and arid lowlands, containing both the highest (Mount Whitney) and lowest (Death Valley) elevations in the lower 48 U.S. states. It also formerly included a productive agricultural area, the Owens Valley, but the water that made farming possible there was acquired by Los Angeles and piped south, an episode made famous by the film Chinatown. The northern two counties in the region are politically distinctive, as they are the only sparsely populated counties in the state that routinely vote for candidates in the Democratic Party. This oddity stems from the fact that many former urbanites have moved to the area to enjoy its spectacular scenery and outdoor recreation opportunities. A bizarre footnote to this phenomenon was the idea of turning Alpine into a majority-gay county in 1970. As summarized by the Wikipedia article on the Stonewall Nation:

In 1970, Alpine County had a population of about 430 people, with 367 registered voters. Under a recent California Supreme Court ruling, new county residents could register to vote after 90 days in residence. Activist Don Jackson presented his idea for taking over the county at a December 28, 1969 gay liberation conference at Berkeley, California. He was inspired by gay activist and writer Carl Wittman, who wrote in his “Gay Manifesto”, “To be a free territory, we must govern ourselves, set up our own institutions, defend ourselves….Rural retreats, political action offices…they must be developed if we are to have even the shadow of a free territory.” He (incorrectly) suggested that if as few as 200 gay people moved to Alpine County, they would constitute a majority of registered voters. Taking over the county government, he said, would result in, “a gay government, a gay civil service…the world’s first gay university, partially paid for by the state…the world’s first museum of gay arts, sciences and history…[and a] free county health service and hospital…”

Not surprisingly, the proposal did not gain traction. As noted in the same Wikipedia article, “Despite announcing in November 1970 that it had close to 500 people ready to move, in February 1971, the GLF [Gay Liberation Front] released a statement that it was abandoning Alpine County for a warmer climate. It has since been suggested that the entire Stonewall Nation idea was a hoax perpetrated by the Los Angeles GLF to generate mainstream publicity.” 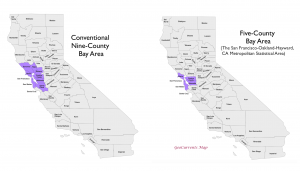 Almost everyone agrees that the San Francisco Bay Area forms a distinctive region, although different sources delineate it in different ways. The most common definition, endorsed by the Wikipedia, is to include all nine countries that actually touch upon the Bay, even though Napa County barely does so. An alternative delineation, which seems to be diminishing, is that of a five-country Bay Area that coincides with the San Francisco Metropolitan Area (officially known as the “San Francisco-Oakland-Hayward, CA Metropolitan Statistical Area”) as defined by the U.S. Office of Management and Budget. 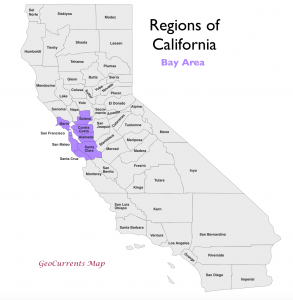 I have, however, defined the Bay Area region somewhat idiosyncratically, excluding Napa and Sonoma counties, which are instead placed in the northwestern region (see the previous post), but including Santa Cruz County even though it does not come close to the Bay itself. I have done so because Santa Cruz is closely linked, especially in economic terms, to the Bay Area’s Silicon Valley (Santa Clara County, essentially). Santa Cruz could, however, just as easily be grouped with the Central Coast counties, as it often is.

The Bay Area is, in general, an affluent area characterized by extremely high housing prices and left-wing voting patterns. It also has a high proportion of Asian residents. I have not subdivided the Bay Area largely because its main sub-regions are county-based. The “South Bay, for example” is essentially Santa Clara County, while “the Peninsula” is San Mateo County. The “East Bay,” however, includes both Contra Costa and Alameda counties. 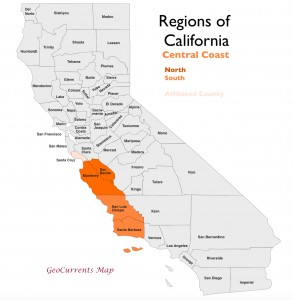 A “Central Coast” region is found in almost all California regionalization schemes, although, again, its delineation varies. Santa Barbara County in the south, for example, is often grouped instead with Los Angeles, and for good reason. San Benito County is sometimes excluded from the Central Coast as well, as it is far from coastal, but it is difficult to figure where else to put it (a few sources place it in the Bay Area). Overall, the Central Coast falls near the middle of most social and economic indicators. This position is somewhat deceptive, however, as the region includes both highly exclusive areas (especially in Monterey and Santa Barbara counties) and highly productive agricultural zones that are home to many poor farm workers. Monterey County ranks 4rth nationwide in terms of its value of agricultural production, thanks to the narrow but fertile Salinas Valley. This valley specializes in labor-intensive vegetable crops. As noted in the Wikipedia:

Agriculture dominates the economy of the valley. Promoters call the Salinas Valley “the Salad Bowl of the World” for the production of lettuce, broccoli, peppers and numerous other crops. The climate and long growing season are also ideal for the flower industry … In particular, a large majority of the salad greens consumed in the U.S. are grown within this region. Strawberries, lettuce, tomatoes, and spinach are the dominant crops in the valley. Other crops include broccoli, cauliflower, wine grapes, and celery.

Smaller zones of equally intensive agriculture are also found in the other counties of the Central Coast region. Tourism is also highly developed in many areas, but the central coastal swath of the Central Coastal region is so rugged that tourism and almost everything else is quite constrained. This is the famed Big Sur area, noted for its spectacular scenery and sparse population.

County-level regionalization is a much trickier proposition in Southern California than in Northern California. Many southern California countries are vast, spanning several distinctive regions, and several have extremely large populations. Los Angeles County alone has more residents than 41 U.S. states. The vast majority of Southern California’s population, moreover, is concentrated in a somewhat narrow zone situated to the south and west of the Transverse and Peninsular mountain ranges, where one finds an essentially continuous belt of metropolitan population. As a result of these issues, I have aggregated the five counties of the Greater Los Angeles Area into one region, which I have dubbed, for want of a better term, “Southland.” That leaves just Imperial and San Diego counties, which are quite different from each other and thus deserve separate regional status. Imperial County stands out from all other counties in California, particularly in its demographic characteristics, as its population is roughly 80 percent Hispanic.