The Political Contradictions of Anti-Urban NIMBY Activism in California

This final entry on Northern California will conclude the series by elaborating on the previously stated thesis that the local drive to protect urban and inner suburban neighborhoods from development is self-contradictory. Although anti-development activists incline to the left, their land-use policies are actually conservative, undermining their own larger agenda. Earlier posts looked at environmental sustainability and class divergence, contending that NIMBY (“Not in My Backyard”) hostility to urbanization thwarts the transition to a lower-carbon economy and places extraordinary burdens on middle- and working-class people, especially young ones. This post will consider the effects of the movement on the broader political orientation of the United States. The argument, simply put, is that by obstructing development in urban cores of the Bay Area and other Democratic-voting metropolitan areas of the country, local preservationists push growth into more development-friendly parts of the country, which tend to be much more conservative. Such dynamics enhance the economic and political power of those places, and thus nudge the United States as a whole in a more conservative direction.

I must stress that such claims are intended to be politically neutral, in accordance with the non-ideological stance of GeoCurrents. I am not arguing, in other words, that enhancing the political power of right-leaning portions of the U.S. is bad, as this blog is concerned with empirical issues of “what is,” not with what ethical issues of “what ought to be.” Admittedly, several recent posts have violated this principle, openly advocating urban intensification. Neutrality is often difficult to maintain, and I let myself get carried away by personal concerns about climate change, economic stagnation, and the widening class divide in the U.S. The same posts do, however, rest on an empirical basis, outlining the contradictions between stated goals and the consequences of actions undertaken. It is a fact that most people in Palo Alto and similar communities want to reduce green-house gas emissions and lessen the gap between the “haves” and the “have nots”; it is also a fact—or so I hope to have demonstrated—that opposition to urban intensification in these same communities actually has the opposite effects. Such an argument should be assessable by readers of any political persuasion. One could, for example, regard global warming as a hoax, welcome suburban expansion along metropolitan outskirts, and celebrate the glowing class disparity in the U.S. and still accept the thesis. 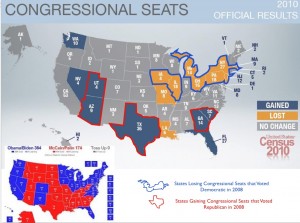 By preventing development in urban and old-suburban areas of the San Francisco metropolitan area, local activists shunt it elsewhere. Previous posts emphasized the Bay Area’s own exurban fringe in the northern San Joaquin Valley, but growth is also pushed into other parts of the country. States that gain from this process, Texas most notably, tend to be much more conservative than California. Such dynamics are experienced across the country, enhancing population and economic growth in Republic-voting areas and discouraging it in Democratic-voting ones. Partly as a result, the balance of power in the U.S. House of Representatives is shifting toward the more conservative parts of the country. Other factors, of course, contribute to this process, but it is difficult to deny the paradoxical consequences of supposedly left-wing NIMBY activism.

A number of conservative writers in the U.S. have noted the same general process, delighting in the diverging fortunes of the country’s two most populous states, contrasting the economic health of Texas with California’s distress. A March 14 post in the National Review Online is typical of the genre. Here Chuck DeVore, former Republican member of the California State legislature, blames California’s fiscal crisis on its high tax rates, powerful unions, obstructing bureaucrats, environmental regulations, litigious legal system, and “subsidization of poverty.” As an example of the difficulty of doing business in California and the ease of conducting it in Texas, DeVore cites Apple’s decision to build a new $304 million campus in Austin rather than in the Bay Area (more recent reports, however, claim that the project may actually go to Arizona). California’s impending fiscal catastrophe, conservative writers like DeVore stress, will probably result in yet another round of tax increases, which will drive away more businesses and people, potentially sending the state into a downward spiral. 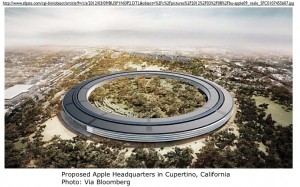 Such charges may have some merit. California’s tax rates are high and will probably increase, discouraging investors and wage earners alike. But overall, the Bay Area remains a very attractive place in which to live and to do business, as is reflected in its land values and rents, both commercial and residential. (The same situation holds in much of Southern California as well.) Silicon Valley is again booming; according to a recent report, “Office occupancy in the region rose by 2.7 million square feet last year, the most since 2000, and rents may advance 11 percent to an average $36 a square foot in 2012.” Many people want desperately to live in communities such as Palo Alto, otherwise they would not be willing to spend $800,000 for small condos in undistinguished buildings or $1,200,000 for modest, mass-constructed tract houses from the 1960s. The real drag on local business is not California’s somewhat excessive taxation rates or its slightly more powerful unions than those found elsewhere, but rather its outrageous land and housing costs and its exasperating obstacles to new urban developments. Apple currently wants to build a gargantuan 2.8 million square-feet corporate headquarters in Santa Clara County, which would dwarf its planned Texas project; gaining permission to do so will prove a challenge, to say the least. Apple’s proposed “space-ship” building can be criticized on both aesthetic and environmental grounds; encompassing 5.7 million square feet of landscaping, the behemoth would not be pedestrian-friendly. But the mere fact that that it is being pursued runs counter to the thesis that businesses and people are being driven out of California by the state’s left-wing policies.

Liberal and conservative commentators alike tend to by-pass NIMBY opposition to urban development when discussing California’s economic crisis. Right-wing writers prefer to focus on taxation, unionization, regulation, and the legal environment, as these issues allow them to score points in national-level debates. Left-wing writers are often reluctant to confront contradictions within their own political camp, and hence try to place all blame on their conservative opponents.

A March 17 article in the San Francisco Chronicle, “Seeking Growth Without Sprawl,” presents a perfect example of such liberal blinders on the urbanization issue. The article touts an “ambitious new regional plan” that would steer new developments towards existing cities and public transportation corridors, based on the new urban intensification paradigm. So far, so good. But when examining opposition to the plan, the article mentions only criticisms put forward by conservative activists. Some right-wingers have attacked the proposal for supposedly ignoring consumer desires, as “future workers and their families will want an environment of single family subdivisions.” That such an objection ignores market realities, supposedly the touchstone of contemporary conservatism, is not mentioned. The article goes on to highlight critics on the extreme right, those who view the entire urbanization scheme as part of a nefarious United Nations plot to extinguish American freedom and establish global governance.

Emphasizing such opposition is an easy course for the San Francisco Chronicle to take, as it fits well with the left-leaning proclivities of most of its readers. But it is also misleading. When actual plans for urbanization projects are put on the table, meaningful resistance comes not from the tiny cadre of U.N conspiracy theorists, but rather from superficially liberal activists who do not oppose urban intensification per se, but certainly do not want it impinging on their own communities. Pointing out such a contradiction could be editorially imprudent, potentially alienating an influential part of the newspaper’s readership. As a result, the real issues are left unmentioned.