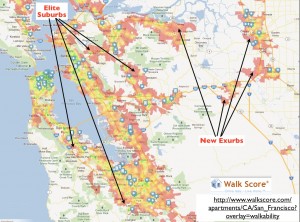 A variety of “walkability indexes” have been created to measure and map pedestrian friendliness. As the maps posted here show, NE San Francisco comes in first place, by a wide margin. Much of the rest of San Francisco scores only moderately high. Elsewhere in the Bay Area, walkability rates vary from middling in the core areas of the older suburbs to exceptionally low in both quasi-rural elite suburbs and on the exurban periphery. 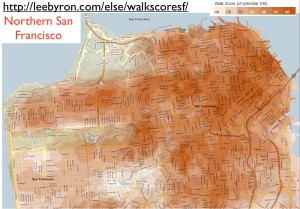 A sound urban system, environmentalists now argue, is characterized by mixed-use, dense, pedestrian-oriented neighborhoods focused around transit stops. Unfortunately, many of the Bay Area’s more thickly inhabited suburbs are not situated near rail lines, increasing their dependence on automobiles. By the same token, neighborhoods around metro and commuter train stations are often marked by relatively low density. Although both market forces and environmental reason call for tightly packed housing in such areas, the anti-intensification, NIMBY (“Not In My Backyard”) movement has forestalled development of this kind.

To demonstrate what might seem to be counter-intuitive assertions, Stanford cartographer Jake Coolidge and I have been working on a visualization scheme to show the relationship between population density and public transportation in the Bay Area. Jake’s maps and graphs are now complete, and are posted here. They focus on the Yellow Line of BART (Bay Area Rapid Transit), which runs from the San Francisco Airport through the city to the far eastern suburbs, and Caltrain, which goes from downtown San Francisco through “the Peninsula” and Silicon Valley to San Jose and beyond. For comparative purposes, paired maps show similar systems located elsewhere in the country, the Orange Line of the Washington D.C. Metro in the case of BART, and the SEPTA Main Line in metropolitan Philadelphia in the case of Caltrain. All four maps show population density in relation to the rail-lines and their stations. Paired graphs indicate the number of persons living within half a mile radius—a reasonable walking distance—of each station on all four lines. (For a complementary analysis of demographic patterns, see the Caltrain HSR Compatibility Blog). 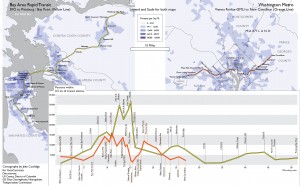 Some interesting patterns are revealed by these maps and graphs. As the first set shows, downtown San Francisco stands out for its density. This pattern, of course, was established well before the construction of the BART line, which dates only to the 1960s. Outside of this restricted area, density in the Bay Area drops off sharply. Even Oakland, supposedly a highly urban area, is not particularly crowded. To the east of Oakland, BART runs through a highly elite, quasi-rural area around Orinda and Lafayette before it enters classical suburbia in Walnut Creek and Concord. Although a few moderately dense developments have sprouted around BART stations in this area, settlement remains relatively thin. Few people walk or even bike to these BART stations, as most are compelled to drive by the distances involved.

The Washington Metro presents some instructive contrasts. Note that much of downtown Washington has relatively few residents; although many people work in the Federal Triangle neighborhood, few live there. The highest density along the Metro’s Orange Line is found not in the District, but rather in “suburban” Arlington, Virginia, especially around the Courthouse station. The strip of land between Rosslyn and Balston presents a nice example of successful urban intensification. When the Metro line was originally opened, Arlington was sleepy, low-rise ‘burb. I lived in the Courthouse area in the late 1980s, and witnessed its rapid transformation into a vibrant urban pocket. A short stroll from the metro-line, Arlington remains as suburban as it ever was, but around each station a walkable urban neighborhood has emerged. The result is a kind of a “bead-city” stretching along the rail-line. Is it odd, I must ask, that northern Virginia has allowed such eco-friendly urban intensification, whereas the supposedly more environmentally aware Bay Area prevents it? 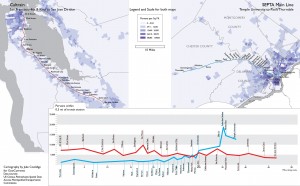 The second set of maps depicts two much older suburban commuter systems. The Bay Area’s Caltrain originated as the San Francisco and San Jose Rail Road in 1863, California’s first railroad. Taken over by Southern Pacific (SP) in 1870, it eventually became a commuter-focused line. Owning in part to its existence, San Mateo and Santa Clara counties opted out of the BART system. At roughly the same time, ridership on the SP line began to decline as freeway construction facilitated private transportation, and by 1977, Southern Pacific was hoping to discontinue service altogether. To maintain the line, the California Department of Transportation (Caltrans) began to provide subsidies, investing in new rolling stock and stations. Such efforts have been marginally successful at best; in 2010, Caltrain was forced to reduce its services by almost fifty percent. As the Wikipedia summarizes the situation: “Revenues for both local and state agencies have been steadily declining, as well as ticket revenues at Caltrain itself, and have left all ‘beyond broke.’”

The map shows, one of Caltrain’s main problems is that it passes through low-density neighborhoods, with very little urban intensification around its stations. Even in San Francisco, the Caltrain track avoids populous neighborhoods and instead extends through warehouse districts, reflecting its origins as a freight line. Ironically, the highest population density along the entire route is found not in San Francisco, but rather in suburban San Mateo. Elsewhere in San Mateo County and in Santa Clara County as well, Caltrain misses the higher density areas, and from Mountain View to San Jose it actually forms something of a low-density corridor. Few people, needless to say, are able to walk to the stations, decreasing ridership and contributing to the system’s financial distress.

The Philadelphia pattern is quite different. Philadelphia’s high density areas are much more extensive than those of San Francisco, as can be seen on the maps. Density along the BART line in northern San Francisco, however, exceeds that of the inner stretch of the Main Line, as can be seen by comparing the two graphs. The suburban reaches of the Main Line also contrast sharply with the Caltrain Line. Whereas the density trend along the Caltrain corridor is virtually flat, that of the Main Line is steep. Over most of its extent, the Main Line passes through low-density communities characterized by “old wealth” estates. Similar neighborhoods are plentiful to the south of San Francisco, but they tend to be located away from the train tracks, towards the mountains. The one major exception is well-heeled Atherton, situated between Menlo Park and Redwood City. As Atherton’s Caltrain station operates only on weekends, it is not mapped here.

If the environmentalists’ call for a transition to a lower-carbon future is to be realized, population growth should be encouraged around transit stations. In actuality, it has been heavily discouraged in northern California. As this cartographic exercise shows, neighborhoods near the main rail lines of the San Francisco Bay Area have tremendous potential for intensification. Urbanization, in turn, would allow ailing lines, like Caltrain, to return to health.