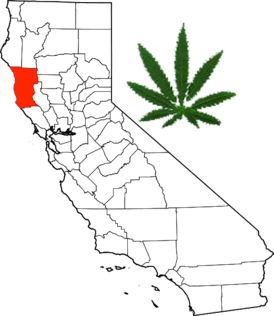 As mentioned recently in this blog, organized criminal activity supposedly accounts for seven percent of the total value of goods and services produced annually in Italy. But that figure is nothing compared to the illicit economy of Afghanistan, where a 2007 United Nations Office on Drugs and Crime (UNODC) report argued claimed that opium accounted for 53 percent of the country’s GDP. Could any place on Earth have a proportionally larger illegal economy? Perhaps. According to an often cited January 22, 2009 MSNBC report, the marijuana crop accounts for two-thirds of the economic activity in Mendocino County, California. There are good reasons to doubt this figure, originally generated by a county-commissioned study: it is impossible to precisely enumerate illegal transactions, local law enforcement agents often exaggerate the value of black market seizures, and the media tend to favor sensational numbers. But whatever the actual figure is, cannabis cultivation is clearly the economic mainstay of Mendocino County, as well as of Humboldt Country to its north.

Much official policy-making rests on the assumption that we know the size of the economy. So what does it mean when vast swaths of economic activity escape governmental oversight, and everyone knows it? Perhaps state power is not as overwhelming as many of us think, or fear, that it is, whether one is in southern Italy, Afghanistan, or northwestern California. Governmental writ in the latter case is also limited by the conflicting legal environment found at different levels of official authority. Even under the Obama administration, the U.S. government so heavily restricts marijuana cultivation that medical researchers can scarcely obtain it, as discussed in today’s New York Times. Yet according to California, cultivation of up to six plants is legal for approved medical purposes, and according to Mendocino County between 2000 and 2008, one could “legally” grow up to 25 plants. (In 2008, Mendocino voters narrowly approved a ballot measure reducing the upper limit to the state norm of six plants.)

The scope of the untaxed marijuana market in the economically besieged state of California has generated calls for legalization, which may be put before the state’s voters next fall. As a result, arguments pro and con are proliferating. One of the more intriguing lines of reasoning in favor of legalization puts the trade in international context: the more cannabis is cultivated locally, the less will be imported from the hyper-violent Mexican drug cartels. According to an October 7, 2009 CBC News report, “Stiff competition from thousands of mom-and-pop marijuana farmers in the United States threatens the bottom line for powerful Mexican drug organizations in a way that decades of arrests and seizures have not, according to law enforcement officials and pot growers in the United States and Mexico” (http://www.cbsnews.com/stories/2009/10/07/politics/washingtonpost/main5368594.shtml).

Yet as the CBS story goes on show, the distinction between domestic and foreign cannabis is not necessarily clear-cut. Mexican drug gangs grow large amounts of marijuana in California, generally in remote public lands. In Mendocino County as elsewhere, such activity is widely condemned and increasingly targeted by law enforcement agencies. According to the January 13, 2010 issue of the Ukiah Daily, the County of Mendocino Marijuana Eradication Team had a record-breaking year in 2009, seizing 541,250 plants weighing 205,044 pounds. The campaign is popular among Mendocino voters – even those who make their livings as small-scale marijuana cultivators. According to country Sheriff Tom Allman, the team’s mandate was to “focus on large commercial marijuana operations and focus on people who are greedy” (http://www.ukiahdailyjournal.com/ci_14178382).