The Indigenous Peoples of Mendocino County: From Genocide to Marijuana Cultivation 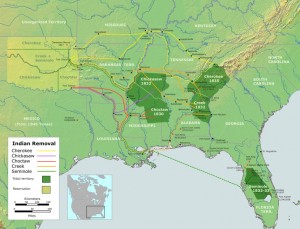 Previous GeoCurrents posts on historical instances of genocide have elicited critical comments from several readers, including one who took us to task for not mentioning genocidal events perpetuated by the United States. There is no denying that the U.S. government has been guilty of numerous genocidal assaults on indigenous communities. The United States engaged in wholesale “Indian removal,” often disregarding accommodations made by indigenous groups to American rule. The classic case was the Trail of Tears, the forced and deadly deportation of the so-called Five Civilized Tribes from the southeastern United States to what is now Oklahoma in the 1830s.

The struggles between indigenous peoples and the U.S. government and its citizens are now relatively well covered in the American school curriculum, which no longer ignores the atrocities committed by the victors. California, however, is often left out of the story. The only “Indian war” of note in the state was the Lava Beds Campaign of 1872-1873, during which Kintpuash (“Captain Jack”) and his fifty-three Modoc warriors kept the U.S. military at bay for almost a year. In standard histories of California, the bloody dispossession of the American Indian communities elsewhere in the state in the mid-1800s is given little attention. California’s native peoples have generally been construed as non-warlike, and the conflicts that ensued when their territories were overrun by white settlers deemed undramatic if not unimportant.

In actuality, the decimation of native Californians was plenty dramatic and shockingly cruel. Consider, for example, the almost forgotten Mendocino War of 1859. The Wikipedia article on the conflict amounts to three terse sentences, noting only that “several hundred American Indians were killed,” and that “many young Indians were sold into servitude in the white settlements.” It does, however, link to historical documents that outline the conflict in some detail. Some of these reports recount outrages committed against the Indians, specifying that the main cause of the conflict was simple cattle theft. The “majority legislative report of 1860” is worth quoting:

“Indians continue to kill cattle as a means of subsistence, and the settlers in retaliation punish with death. Many of the most respectable citizens of Mendocino County have testified before your committee that they kill Indians, found in what they consider the hostile districts, whenever they lose cattle or horses; nor do they attempt to conceal or deny this fact. … The testimony shows that … in one instance, an expedition was marked by the most horrid atrocity …” 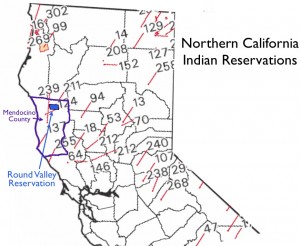 The report concluded with a simple question: “Shall the Indians be exterminated, or shall they be protected?” The decision went for protection, but by today’s standards, the “protection” afforded would itself be considered genocidal. In the end, most of the surviving native people of Mendocino were forced into the Round Valley Reservation in the remote northeastern corner of the county, one of the few large reservations in the state (36 sq mi [94 km²]). The Wikipedia’s description of the removal process is stark:

“Indians came to Round Valley as they did to other reservations — by force. The word “drive”, widely used at the time, is descriptive of the practice of “rounding up”       Indians and “driving” them like cattle to the reservation where they were “corralled” by high picket fences. Such drives took place in all weather and seasons, and the elderly and sick often did not survive.”

The deportees faced further travails as they settled in their new home. Round Valley was the designated refuge for a half dozen or more separate ethnolinguistic groups, several of which had long been bitter enemies. Establishing concord was not easy. And despite its reservation status, Round Valley attracted white settlers as well—many of whom proceeded to attack the Indians, requiring intervention by the U.S. army.

In time, the various tribes forced into Round Valley amalgamated into a new hybrid group. Numbers were small, intermarriage was necessary, and hostility from outsiders enhanced internal cohesion. Today the reservation’s official website specifies that it covers the “Round Valley Indian Tribes: A Sovereign Nation of Confederated Tribes.” As of 2000, this nation’s total population was 300.

By most definitions of the term, the Round Valley nation is not sovereign, but it does possess a degree of legal autonomy. How far such autonomy extends is much disputed. As is true elsewhere in Mendocino County, the most contentious issue is marijuana. In 2007, the tribal council voted to allow the growing of up to thirty-three plants per household while restricting the practice to specific areas. Limiting cultivation to particular parts of the reservation was designed to reduce participation by Mexican cartels, which have a reputation for both violence and environmentally destructive growing techniques. A 2010 Indianz.com article claimed, however, that much of the cultivation on the reservation was still being carried out by “the Mexican mafia.” The article also quoted tribal police chief Carlos Rabano as saying that although federal law prohibits the planting of marijuana in “Indian Country,” he still “tries not to interfere with tribal member’s yards.” 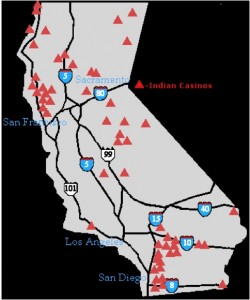 Many of the other surviving Native American communities in the region have enacted anti-marijuana policies. Unlike their counterparts in Round Valley, whose homeland is too remote to attract gamblers, the tiny (40 acre [16 hectare]) Hopland Reservation in southern Mendocino County has a profitable casino to protect.  In February 2012, for example, the police chief of the Hopland Reservation told reporters, “Most people who visit the Sho Ka Wa Casino or elsewhere on the Hopland Reservation know better than to bring marijuana, even if they have a doctor’s recommendation to use it.” Another Hopland tribal leader put the policy in its broader context: “We could do something like Round Valley and … tell our officers not to enforce (federal marijuana prohibition), but the BIA [Bureau of Indian Affairs] could revoke our federal deputization.”