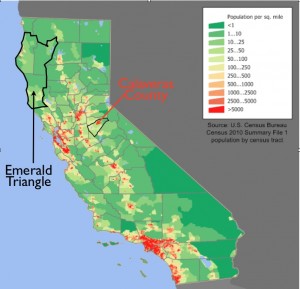 The previous GeoCurrents post noted that Mendocino County remained in the Democratic-voting camp after California’s geopolitical transformation largely because it experienced a demographic transformation of its own during the same period. The first glimmerings of this sea change can be dated to 1957, when artist Bill Zacha settled in the coastal village of Mendocino and established an art center. According to a 1962 Look magazine article, the town was moribund, its dwindling population dependent on a dying lumber industry. But the village—as it is often called to distinguish it from the county of the same name—was blessed with a scenic location, as well as a stock of fine Victorian houses that had escaped the fires that had periodically devastated most other coastal California communities.

Northern California in the 1950s and early ‘60s had a booming economy and a thriving art market. The established artist colony of Carmel (officially, Carmel-by-the-Sea) had become too pricey for many aspiring artists. Enough demand had built up that where Zacha settled, other followed. By 1962, Look described Mendocino as “the most talked about art center in northern California.” The village’s population, the article claims, jumped from 500 in 1958 to 1,165 in four years later. It is now less than 1,000; Mendocino’s residents have adopted rigid historical preservation rules, making it all but impossible to build within the village. As the local arts community has expanded, it has been forced to spread geographically as well, helping change other parts of the county in the process. 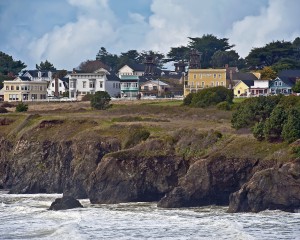 The real transition, however, came in the early 1970s with the migration of hippies from San Francisco and environs. (I used the term “hippie” advisedly, as it is widely used for self-identification; a local 2008 blog post, for example, was devoted to “Celebrating Mendocino County’s Counter Culture Hippie Past [Which is Not Past in Mendoland].”) The hippie movement was originally urban, but its followers were soon gripped by a “back to the land” imperative, and Mendocino beckoned. A several-hour drive from San Francisco, Mendo boasted a mild climate, a stunning coastline, extensive redwood forests, and a thriving arts colony. In those days, it also had relatively inexpensive land, logged-over timberland newly subdivided into ten to forty acre plots (four to sixteen hectares). By 1970, a significant migration was underway.

From a scholarly perspective, the hippie movement, both in Mendocino and more generally, is an understudied phenomenon. It is not the sort of topic that graduate students would be encouraged to select for their dissertations. Some good works of journalism, however, have been produced, along with some excellent fiction. T. C. Boyles’ novel Budding Prospects

, set near Willits in north-central Mendocino, is something of a classic. Also recommended is Nicholas Wilson’s limited-edition photo-essay, Mendocino in the 1970s: Peoples, Places, and Events of California’s Mendocino Coast. But overall, as academics are wont to say, more research is needed.

As I find Mendocino County and the hippie movement that transformed it significant, interesting, and understudied, I have long given it some attention. My connection to the county dates back to my earliest memories. In 1962, when I was five, my parents bought a minuscule share of a 29,000-acre ranch in northeastern Mendocino County. The land was slated to become prime recreational property along a new reservoir that would arise with the damming of the Eel River, a project that would have flooded out Round Valley. The highpoint of every year of my childhood was a camping excursion to “Mendocino,” where we had the run of the vast ranch. The thought of reservoir inundating the property helped turn me into a radical environmentalist, a position that I later repudiated

in full. Interestingly, plans for the massive dam were killed in the late 1960s by then-governor Ronald Reagan; according to some, Reagan was motivated by his sympathies for the Native Americans of the Round Valley Reservation. 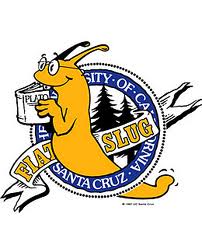 My early visits to Mendocino were in the pre-hippie 1960s. I subsequently got to know that subculture fairly well, although I did so in a different part of the state. Hippies did not move just to Mendo and Humboldt, but rather streamed out to almost all rural, wooded parts of northern California. (Only in the so-called Emerald Triangle of the north coast, however, did they move in such numbers as to fundamentally transform local cultures.) I encountered the movement in the early 1970s, after my family moved from the Bay Area to rural Calaveras County (population 12,000 at the time) on the western slope of the Sierra Nevada. Hippies in Calaveras were not scarce, “wannabe” hippies were numerous, and the attitudes of the movement deeply influenced certain subcultures of the local high school. After graduating from Calaveras High in 1975, I went to the University of California at Santa Cruz; UCSC’s mascot, the Banana Slug, tells you all you need to know about its proclivities. I have, in other words, gained a certain understanding of the movement through close observation.

I was reacquainted with Mendocino in 2002, when I moved back to California from North Carolina, and my best friend from high school moved to the Anderson Valley. In visiting him, I met a number of his neighbors and friends. I have also gone to many local community events: county fairs, concerts, variety shows at the local (all-solar) grange hall, and even road-association meetings. I have talked to local residents at length, many of whom have been more than happy to tell their stories, and several of whom are both deeply knowledgeable and as intellectually sophisticated as any university professor. Actually, a few of them are, or were, professors themselves. This list included for many years Kary Mullis, Nobel laureate in chemistry. I never met Mullis or attended any of his legendary parties, but I have certainly heard stories. From his Wikipedia article:

Mullis writes of having once spoken to a glowing green raccoon. Mullis arrived at his cabin in the woods of northern California around midnight one night in 1985, and, having turned on the lights and left sacks of groceries on the floor, set off for the outhouse with a flashlight. “On the way, he saw something glowing under a fir tree. Shining the flashlight on this glow, it seemed to be a raccoon with little black eyes. The raccoon spoke, saying, ‘Good evening, doctor,’ and he replied with a hello.” Mullis later speculated that the raccoon ‘was some sort of holographic projection and … that multidimensional physics on a macroscopic scale may be responsible’. Mullis denies LSD having anything at all to do with this.

My forays into Mendocino County over the past ten years have been conducted in the spirit of cultural-geographic fieldwork. I trained in a geographical school that emphasized—some would say fetishized—fieldwork, especially as done in the tradition of Carl O. Sauer, founder of the (old) Berkeley School of Cultural Geography. Fieldwork to Sauer meant getting to know the land as closely as possible, which essentially meant getting to know the local people and learning from them. My first book, Wagering the Land

, based in Northern Luzon in the Philippines, was wholly within the Sauerian tradition. But in the mid-1990s, I abandoned my local specialization and instead focused on the global scale. But I never lost interest in old-school fieldwork, and I have been re-engaged in it, albeit in an unfocused and desultory manner, for a number of years.

In the next post, I will draw on these experiences to describe the hippie migration to Mendocino County and its consequences in more detail.