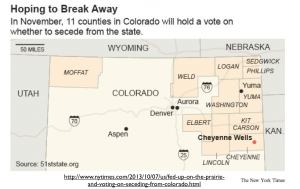 The intense political polarization of the United States is most clearly reflected by the dysfunctional nature of the federal government. At a more local scale, it is seen as well in the growing movement to create new states by splitting existing ones. Most of these cases involve the desire of people in rural, conservative counties to secede from the more liberal states in which they are currently located. A front-page story in the October 7 edition of the New York Times, for example, highlights a drive to devise a new state of “Northern Colorado.” Eleven Colorado counties will vote on a secession measure this November. As the Times article specifies, the move for separation was prompted by gun-control measures passed with support from the more metropolitan parts of the state. Other issues also play a role, as local voters are reportedly disturbed by “marijuana shops, green energy policies and steps to embrace gay marriage and illegal immigrants.”

A number of geopolitical challenges, however, stand in the way of the movement to create new US states, and it is not clear if secession is a realistic possibility even if local voters strongly endorse it. Although the U.S. Constitution allows the formation of new states, territory cannot be taken from an existing state without the consent of both the federal government and the state in question. Such approval would be difficult to obtain, as any new state would automatically send two new senators to Washington D.C., upsetting the country’s political balance. Not surprisingly, no actual instance of state division has occurred since the pro-union counties of Virginia split off to form West Virginia at the height of the Civil War. 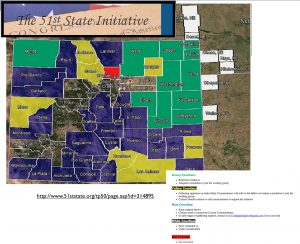 The would-be state of Northern Colorado has its own particular problems as well. As the New York Times map indicates, the eleven counties voting on the measure this November are not contiguous, which would make any state that they would form a clumsy, two-part polity. With a population of only around 376,000, this new state would also be the least populous member of the union by a wide margin, with 200,000 fewer residents than 50th-place Wyoming. Most of this meager population, moreover, is concentrated in Weld Country, home to some 263,000 persons. Although Weld is the leader of the secession movement, it is also the most liberal of the disgruntled Colorado counties, having given Barack Obama 42 percent of its votes in 2012. (Intriguingly, Weld County’s main city, Greeley, played a minor role in the growth of Egypt’s Muslim Brotherhood by virtue of its liberality; Sayyid Qutb, the Brotherhood’s leading intellectual founder, considered Greeley’s church-sponsored dances in 1949 to be such “hotbeds of debauchery” that he turned passionately to the “Shade of the Quran” [the title of one of his main works]).

Although the eleven Colorado counties that are voting on secession this November would make a sparsely settled, discontiguous state, the movement’s backers have more ambitious plans. As the map taken from their website (“The 51st State Initiative”) shows, they also hope that a number of additional counties will join the cause. At its maximum extent, “Northern Colorado” would actually be more accurately described as “Peripheral Colorado,” excluding only the greater Denver metropolitan area along with a few sparsely populated Rocky Mountain counties noted for their ski resorts and affluent populations. Some of the counties marked for potential inclusion, however, make little political sense; heavily Hispanic Costilla County, for example, gave a higher proportion of its votes (73%) to Barack Obama in 2012 than did Boulder County (70%), the left-leaning home of the University of Colorado. The would-be state would also potentially reach into western Kansas and Nebraska; here the desire for secession is less clear, as both states are relatively rural and reliably conservative on most hot-button issues. For the core secessionist counties, other options are also being considered if the formation of a new state proves impossible, such as union with neighboring Wyoming. 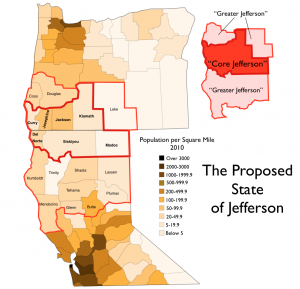 A more long-standing secession drive seeks to create the new state of Jefferson, to be carved out of far northern California and southern Oregon. The Jefferson movement got off to a strong start in 1942 when “a group of young men gained national media attention when, brandishing hunting rifles for dramatic effect, they stopped traffic on U.S Route 99 south of Yreka, and handed out copies of a Proclamation of Independence, stating that the state of Jefferson was in ‘patriotic rebellion against the States of California and Oregon’” (as noted in the Wikipedia article on the topic).  The start of World War II cut the movement short, but it has continued to periodically resurface. In early September of this year, the Board of Supervisors of Siskiyou County voted 4-1 to “pursue seceding from California,” a move prompted by “a lack of representation in Sacramento for the Republican-majority county, [and] issues pertaining to water rights and the rural fire prevention fee.” Several weeks later, the Board of Supervisors in neighboring Modoc County voted 4-0 to join the movement. Similar proposals are being considered in other northern California counties, including Butte, Shasta and Lassen. “California is essentially ungovernable in its present size,” claims Mark Baird, a spokesperson for the Jefferson Declaration Committee.

The original Jefferson proposal included only a handful of counties, seven in the main version (three in California and four Oregon), and five in another (four in California and one in Oregon). More recent proposals are more ambitious; the State of Jefferson Project website features a map of the new state that would encompass nineteen counties. In all of these proposals, the modest town of Yreka (population 7,800) in Siskiyou County would serve as the capital. Regardless of which specific version is considered, Jefferson would have a fairly small population. The seven-county scheme would have only some 458,000 residents, over 80 percent of whom currently live in Oregon, while the nineteen-county version would have a population of roughly 1,416,000, a majority of whom currently live in California.

The Jefferson proposal, like most other state division ideas, is rooted primarily in population density and voting patterns. As the map posted to the left shows, far northern California and southern Oregon forms a low population zone sandwiched between the much more densely populated regions of greater Portland in northwestern Oregon and the San Francisco and Sacramento metropolitan areas of California. It is also a reliably conservative, Republican-voting region, again in sharp contrast to the urban and suburban areas of both states. Although Oregon may appear to be a Republican-leaning state on the electoral map, the concentration of its population in the Portland metro area ensures its general support for candidates from the Democratic Party. In California, the electoral imbalance is even more pronounced, preventing the Republican Party from acting in a competitive manner in statewide elections. 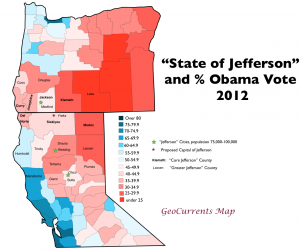 A close analysis of electoral and population maps, however, shows that the proposed state of Jefferson encounters political problems of its own. In the seven-county version, the demographic core of the would-be state, containing almost half of its population, is Jackson County, Oregon. But Jackson is a “purple” or swing county that has been trending leftward over the past several decades. Although George W. Bush won it handily in 2000, with 54 percent of the vote, Jackson narrowly supported Barack Obama in 2008. As increasing numbers of people are moving from California’s Bay Area to Jackson’s cultured town of Ashland, site of Southern Oregon University and the noted Oregon Shakespeare Festival, it may well move further to the left in future elections. As a result, staunchly conservative Jefferson advocates may be advised to drop Jackson Country from their design.

The proposal for a larger state of Jefferson encounters similar problems. Two of its counties, Humboldt and Mendocino, are Democratic-voting—Mendocino strongly so—and two others, Butte* and Trinity, are now electoral toss-ups. Although the Jefferson website includes a plea for secession from Humboldt County based on the dire condition of the local logging industry, marijuana cultivation is a vastly more profitable business, and local cannabis growers and those who rely on their patronage would not in general be inclined to support membership in a conservative state. State of Jefferson advocates would find more backing if they were to focus their outreach efforts on the interior rather than the coastal counties of northern California.

*Butte is a relatively liberal county largely because of the presence of California State University, Chico, which has more than 16,000 students.