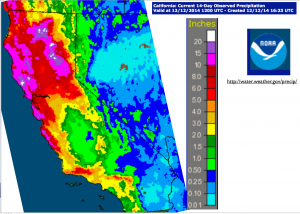 Although droughts and floods are generally thought of as opposites, they can occur simultaneously, as droughts tend to be long and cumulative while floods are generally short-lived and episodic. Much of the U.S. state of California currently finds itself in this paradoxical situation. Several storms have hit the state since the beginning of December 2014, and that of December 11-12 has been, according to preliminary reports, the strongest in at least six years. Minor flooding has resulted in many locations, with several rivers overrunning their banks. As the map posted here shows, several 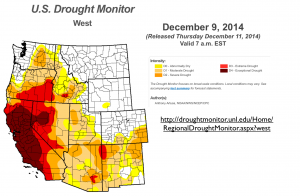 portions of the state have received more than 20 inches (508 mm) of liquid precipitation over the past two weeks. But as experts are quick to point out, the state remains locked in a historic drought. According to the Stanford Report of December 10, the rains experienced thus far have brought only “short-term respite” to the on-going water crisis. As explained by Stanford University’s Daniel Swain:

During the past three years of drought, most of California has accumulated a precipitation deficit equivalent to one to two years of rain. Those are very large numbers, and it’s hard to make that back quickly. Even if you do get a particularly wet winter, you’d need to have record rainfall to break the drought, which would bring its own problems, such as flooding.

California’s hydrological predicament brings up a number of interesting issues regarding mapping, possible global warming, climate and weather prediction, and so on. Major debates have swirled over the magnitude and cause of the current drought. Certainly the year 2013 was characterized by an unprecedented lack of precipitation. In that year, San Francisco received only 3.38 inches (86 mm) of rain, whereas its average annual total is well over 20 inches (508 mm). But as California has 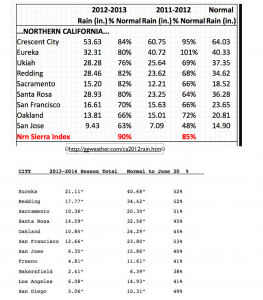 a Mediterranean climate, with almost no summer rainfall, the state’s “water year” runs from the beginning of July to the end of June. Looked at in these terms, the current drought is extreme but not quite so exceptional. Owing to a series of strong storms in November and December 2012, San Francisco received 70 of its average rainfall in 2012-2013. But as it measured only 66 percent in 2011-2012 and only 53 percent in 2013-2014, the cumulative 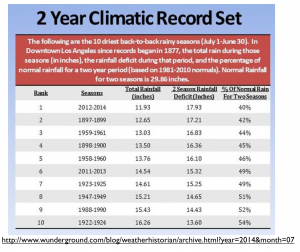 drought is indeed pronounced. In Los Angeles, the two-year period of 2012-2014 was the driest in recorded history, with only 40 percent of average precipitation recorded.

As California’s precipitation records extend only to the mid-1800s, it remains uncertain exactly how unusual this dry spell has been. Some researchers think that it has been truly epic. A recent publication by the American Geophysical Union (AGU) claims that, “a combination of record high temperatures and sparse rainfall during California’s three-year drought have produced the worst conditions in 1,200 years.” Other climatologists, however, argue that the recorded droughts of the 19th, 20th, and early 21st centuries were “minor compared to the ancient droughts of 850 to 1090 and 1140 to 1320,” which have obviously occurred within the last 1,200 years; they also claim that the past 100 years have been, overall, abnormally wet. Much of this controversy hinges on the time-scale employed, as things can look quite different if one examines three-year temporal segments as opposed to thirty-year segments.

Equally controversial is the cause of the current drought. Many observers have blamed it on human-caused climate change. The authors of the California Water-Blog, for example, argued in June 2013 that increased evaporation and decreased precipitation are generating a much-reduced “new ‘normal’ water year.” A recently released report by the National Oceanic and Atmospheric Administration, however, concludes that the drought “is a result of natural climate variability over the past three years and that climate change caused by humans has played little role.” Not surprisingly, the controversial climatologist Michael Mann quickly objected to this report, concluding that “[t]he methodology used in the current article, in my view, is deeply flawed because it doesn’t properly account for a number of potentially important factors behind the record California drought.” Other climate scientists agree, claiming that global warming will probably generate gargantuan droughts over not just California but also a much larger swath of the U.S. Southwest. As was reported in the Los Angeles Times:

The chance of a “megadrought” gripping the Southwest for more than 30 years has increased to 50%, scientists say, which means bad news for California’s already parched landscape. The odds of a 10-year drought afflicting the southwestern U.S. have increased to 80%, according to a new study by Cornell University, the University of Arizona and the U.S. Geological Survey.

One complicating factor in regard to such predictions, however, is the fact that global warming, to the extent that it occurs, is expected to generate greater precipitation at the global scale. At more localized frames of analysis, to be sure, some regions are expected to see pronounced rainfall reduction. For California, different climate-forecast models produce different results, with nothing approaching a consensus having been reached. Intriguingly, one 2013 study foresees “increasing annual precipitation in the central and northern regions of the state” but not in the south, contending as well that that rainfall in the future will be increasingly concentrated in the winter months.

Partly as a result of such investigations, some climatologists warn that possible mega-floods rather than mega-droughts are the real cause for concern. A recent report in Climate Nexus even links California’s most recent storm to global warming, focusing on the fact that “[sea-water] temperatures off the California coast are currently 5 to 6°F warmer than historic averages for this time of year—among the warmest autumn conditions of any time in the past 30 years.” This article generated derision at the climate-skeptical blog WUWT, its headline reading “The Eye-Roller That You Knew Was Going To Happen”; according to WUWT, “The storm impacting California today is just like hundreds of previous storms in recorded weather history, the only thing that is new is the desire to link it to climate change for political purposes.” 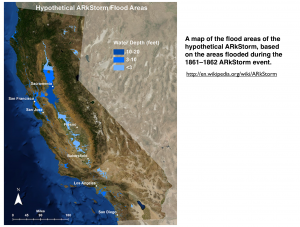 Ironically, concerns about possible devastating floods were widely expressed in the California media after the heavy rains of November 2012—just before the current drought began to intensify. At this time, the public was introduced to the concept of the “ARkStorm,” a super-storm hypothesized by the U.S. Geological Survey (the “AR” in ARkStorm refers to the “Atmospheric River,” a phenomenon that occurs when subtropical moisture is pulled into the state by a low-pressure center; the “k,” on the other hand, merely references Noah’s Ark). A possible ARkStorm is sometimes called “the other big one,” as the damage that it could cause could well exceed that of a major earthquake, the more commonly feared natural disaster in California. An ARkStorm-like event certainly occurred in the water-year 1861-1862, and “geologic studies of deposits offshore of California’s big rivers suggest that storms even bigger than 1861-62 have happened six times in the last 1800 years.” According to the Wikipedia, damage from such an event could exceed $725 billion. As the article describes a possible ARkStorm event:

The Central Valley experiences hypothetical flooding 300 miles long and 20 or more miles wide. Serious flooding also occurs in Orange County, Los Angeles County, San Diego, the San Francisco Bay area, and other coastal communities. Windspeeds in some places reach 125 miles per hour, hurricane-force winds. Across wider areas of the state, winds reach 60 miles per hour. Hundreds of landslides damage roads, highways, and homes. Property damage exceeds $300 billion, most from flooding. Demand surge (an increase in labor rates and other repair costs after major natural disasters) could increase property losses by 20 percent. Agricultural losses and other costs to repair lifelines, dewater (drain) flooded islands, and repair damage from landslides, brings the total direct property loss to nearly $400 billion, of which $20 to $30 billion would be recoverable through public and commercial insurance. Power, water, sewer, and other lifelines experience damage that takes weeks or months to restore. 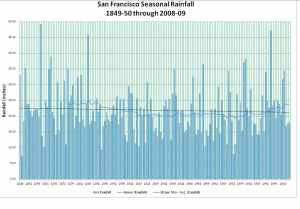 As existing climatological records show, California is characterized by pronounced precipitation variability. Both devastating droughts and calamitous floods have been a feature of the local climate for millennia, and will almost certainly continue to occur in the future. It remains to be seen whether the increasing concentration of carbon dioxide and other greenhouse gasses will significantly change the intensity and frequency of both phenomena.