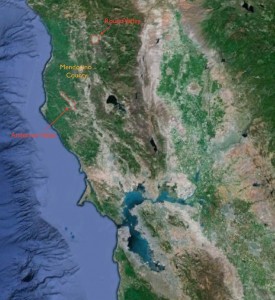 An earlier GeoCurrents post described the food culture of a certain segment of the San Francisco Bay Area as exhibiting “cosmopolitan localism.” Such attitudes are not unique to urban areas in Northern California. In Mendocino County, cosmopolitanism takes on distinctly rural cast. In some of the most seemingly isolated areas, one can find pronounced cultural sophistication and global engagement.

Consider, for example, Covelo (population 1,255) in remote Round Valley in northeastern Mendocino County. When I first visited Covelo as a child in the early 1960s, it was a dusty cow town, a seeming throwback to an earlier era. Today, readers might note the name “Covelo” in the front-matter of books from Island Press, probably the foremost environmental publisher in the world. Although the main offices of Island Press have been in Washington D.C. since 1984, the firm was founded in secluded Covelo, and publication information in its books has long read, “Washington D.C, London, Covelo.” Gardening enthusiast may have encountered the town’s name when searching for rare heirloom vegetable and flower seeds, as Covelo is also home to the Sustainable Seed Company, a leader in an expanding economic niche.

Nowhere is such “cosmopolitan ruralism” more evident than in Anderson Valley, a narrow and scenic fault-drop valley that cuts through the steep Coastal Range in southwestern Mendocino County. Anderson Valley’s historical isolation is evident in its development of a fairly well known “dialect” called Boontling, named after the valley’s main town, Boonville (population 1,035). Actually, as explained elsewhere by Asya Pereltsvaig, Boontling is not a dialect at all but rather a “jargon,” a purposefully developed form of speech meant “to ease in-group identification and prevent outsiders from understanding insiders.” Unlike true dialects, Boontling has no grammatical peculiarities. It does, however, have a sizable and colorful vocabulary that reflects the history of the region, with borrowings from Scottish Gaelic, Irish Gaelic, Spanish, and the region’s indigenous Pomoan language. The insider nature of Boontling is particularly clear from its extensive use of the so-called anthroponyms: common nouns and even verbs derived from proper names of its (former) inhabitants or visitors. For example, Bill Nunn is Boontling for “syrup,” after a man who put syrup on nearly everything he ate, and Jenny Beck is the local word for “a tattletale,” after some Jenny Beck who was a local gossiper. Favorite local drinks are known as Frati “wine,” after a Mr. Frati, local vineyardist, and zeesee “coffee,” after the initials of one Zachariah Clifton “Z.C.,” a local  character who liked his coffee strong. Competing words for “telephone” (or the corresponding verb) include Joe, Levi and Walter, as two contrasting legends give the name of the first man in Boonville to use a telephone as either “Joe” or “Walter Levi.” Boontling verbs that derive from proper names include to Charlie meaning “to embarrass,” after a Native American named Charlie Ball who was noted for his bashfulness, and to Otto meaning “to work hard,” after an industrious German settler whose given name was Otto. Although Boontling is no longer used extensively, it does retain a following and it remains a source of local pride. 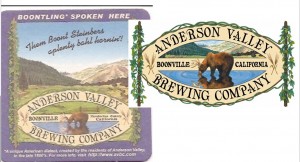 Outsiders may occasionally encounter Boontling on the labels of beer produced by the Anderson Valley Brewing Company, a premier microbrewery located in Boonville. The firm’s labels intriguingly depict an imaginary deer-bear hybrid known as—what else?— a “beer.” The presence of such a brewery in the valley is significant. According to a number of writers (most recently, Charles Murray), beer consumption is a major class-marker in the United States; mass-market brews are favored by members of the working-class and more generally by those without cosmopolitan aspirations (or pretensions, as some might say), whereas micro-brews are supposedly embraced by the “cultural elite.” Such a distinction might be both simplistic and exaggerated, but it does capture something real. And throughout Mendocino County, local microbrews are big. Whether those produced by the Anderson Valley Brewing Company occupy top position, however, is an open question. Some experts prefer the North Coast Brewery in nearby Fort Bragg, whose Russian imperial stouts and Belgium-style ales in particular have gained a following among connoisseurs. 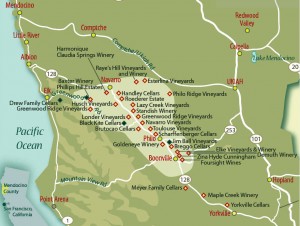 Premium beer may be a marker of Anderson Valley, but wine is much more important. Mendocino County is broadly noted for its wine production, and Anderson Valley is the premier locale. Pronounced micro-climatic differentiation in the valley allows wine diversification. As one travels northwestward toward the ocean during the summer, the temperature steadily drops. On any given July day, it could easily be 92°F (33 °C), in Boonville in the southern part of the valley and 76°F (24°C) in Navarro at the north end (on the cost, 12 miles down the road, it would probably be 64°F [17°C], windy and overcast). The cooler northern part of the Anderson Valley favors Pinot Noir and Alsatian wines, such as Riesling and Gewürztraminer. Sparkling wines are also produced in the area. Overall, Anderson Valley is noted for its warm summer days and cool nights, its “Indian summers” in October, and its long growing season, conditions ideal for many premium wines. Foreign firms, such as Louis Roederer of France, have invested heavily in local wineries.

Although Anderson Valley is noted in the San Francisco Bay Area for its beer and wine, its broader economy is based much more on marijuana. This artisanal industry is hardly hidden. The “Anderson Valley Home Page,” for example, informs its readers that, “The modern industry here is art, apples, beer, wine and of course we grow our own smoke.” Links on the same page give readers additional information on such topics as “retreats,” “camping,” “churches,” “marijuana,” and so on. The police blotter in the local newspaper once included an entry that read (if memory serves me correctly): “caller reports seeing marijuana being grown on Philo-Greenwood Road; dispatcher says to call back when he doesn’t see marijuana being grown on Philo-Greenwood Road.” In Anderson Valley, ripped-off cannabis growers will sometimes call local law enforcement officers to report the theft of their harvests. In one case reported in the valley’s newspaper,* local authorities coordinated with the Sonoma County sheriff’s office after such a call, set up a road-block at the intersection of U.S. Route 101 and California State Highway 128 in Cloverdale, and nabbed the thieves when they drove down (there are still few ways out of the Anderson Valley). The victims of the theft reportedly asked for the return of their stolen merchandise, but that request was denied.

The local newspaper in question is the Anderson Valley Advertiser (AVA), a phenomenon unto itself, its scope much belied by the “advertiser” label. As the Wikipedia notes, the paper has a “small national following,” which it has gained from its quirky left-wing editorializing, its detailed reporting, and its entertaining style. As the paper’s website shows, “marijuana defense” and other cannabis related themes figure prominently in its current advertising. The AVA gained a certain national renown in the 1980s after it published the erudite “letters of Wanda Tinasky,” which many believed had been penned by the novelist Thomas Pynchon, but which were actually written by beat-poet Tom Hawkins.

Anderson Valley and environs are also well noted for musical performances, which again have a cosmopolitan cast. Every June the valley plays host to the Sierra Nevada World Music Festival, even though it is far from the Sierra Nevada (some would also object to the term “world,” as most of the music performed at the festival is of Caribbean origin). In July, the Mendocino Music Festival in the nearby coastal village of Mendocino (population 924) features musicians from the San Francisco Symphony, and San Francisco Opera Orchestra, and the San Francisco Ballet Orchestra. A few miles to the north, in the town of Fort Bragg (population 7,026), the Gloriana Musical Theatre regularly puts on Broadway shows, operas, and other forms of musical theater.

The eclectic musical tastes of the Anderson Valley, as well as its political predilections, are evident in the radio programming of KZYX, a listener-supported community radio station based in the village of Philo (population 349). KZYX is “hybrid” operation, broadcasting professionally produced public radio shows but also relying on the efforts of over 100 local volunteer programmers. It is also one of the few radio stations in the U.S. to regularly run the Al Jazeera English news service.

The political inclinations of the “Anderson Valley cosmopolitan culture” sketched above run from the center-left to the far left, and the struggles between moderates and radicals can be intense; at KZYX, the more extreme members of the community have been known to disparage programming from NPR (National Public Radio) as actually reflecting the views of “National Petroleum Radio.”  But of course not everyone in the valley leans to the left, or partakes of the cultural offerings discussed here. The broader community is quite diverse, including many families rooted in the older ranching and logging industries, as well as a sizable Hispanic sector. The demographic characteristics of the valley, as well as its historical development, will be considered in a later post.

*I am again relying on memory here, as I cannot locate the article in question.