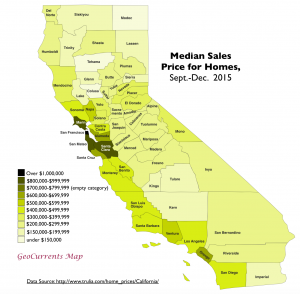 As promised in late 2015, GeoCurrents be will continuing its policy of giving away easily customizable base maps made with simple presentation software (Keynote and PowerPoint). Today’s base map, which depicts the counties of California, can be downloaded at the links at the bottom of the page. (As before, several maps are included in each set, each one with slightly different feature.)

Whenever I finish such a base map, I feel compelled to use it for some sort of thematic illustration. In the case of California, my first inclination was to map a topic of local obsession: the cost of homes. Housing prices in parts of California have reached a level so astronomical as to provoke widespread despair (coupled, however, with a certain degree of concealed glee among the beneficiaries). The geography of housing costs can be easily grasped by juxtaposing a map of median home prices in 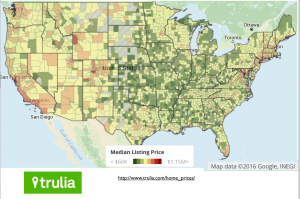 California with a similar map showing all of the United States. As can be seen on the first map, extraordinary expense is primarily a feature of the San Francisco Bay Area, particularly the string of counties that runs from Marin in the north to Santa Clara (“Silicon Valley”) in the south. Elsewhere in the state, homes are relatively inexpensive. “Relatively,” however, is the key word. The median list price in Sacramento County ($270,000) may seem like a bargain compared to that of San Mateo County ($974,000), but in national terms it is still high. As can be seen in the Trulia real-estate map of the United States, relatively few counties in the entire Midwest fall into the same category of expense as Sacramento County. 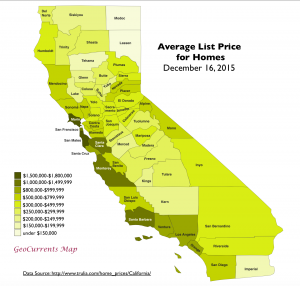 Several people to whom I showed the map of median home prices found it surprising, as they expected to see higher prices in such counties as Monterey and Santa Barbara, which are widely known for their up-scale communities. Both counties, however, also contain extensive agricultural areas characterized by moderate to low levels of income. The exclusivity of the upper end of the market in Monterey and Santa Barbara counties is nicely captured by the map of average list prices for homes. Here Santa Barbara ranks in the third position, with a figure just below 1.5 million dollars. 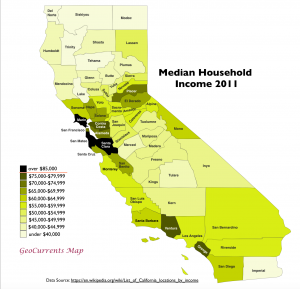 The price of homes in California correlates relatively well with income levels, but with some interesting differences and discrepancies. The most significant is the fact that median household income varies by less than a factor of three, whereas the median price of homes varies by a factor of almost 10. The distinction between California’s two main metropolitan centers is also notable. Housing is relatively affordable, when considered with regard to median household income, in such southern California counties as Orange and Ventura than it is in such Bay Area counties as San Francisco and Alameda. East/west differences also come into play. Placer and El Dorado counties in the east are particularly affordable, characterized by high incomes but relatively modest home prices. Both of these counties are largely rural, but they also include some of Sacramento’s more up-scale suburbs and share as well the amenity-rich Lake Tahoe basin. Mendocino County on the north coast exhibits the opposite pattern, with home prices in the same range as Placer and El Dorado but with a much lower median household income. But Mendocino’s official income figures are unduly low, as they do not factor in the county’s large but mostly underground cannabis economy. 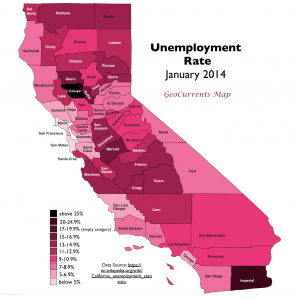 California’s unemployment map is also worth examining in the light of the state’s housing crisis. Here we see low unemployment figures for the Bay Area, particularly San Mateo and Marin counties, located just south and north of San Francisco respectively. But many jobs here are difficult to fill owing to the severe shortage of housing and the astronomical levels of rent. The off-the-chart 29.9 percent unemployment figure for rural, agricultural Colusa County is difficult to explain, if indeed it is accurate. Many other farming counties in California also have high unemployment figures, but not nearly to this extent. Only Imperial County in the far southeast comes close.

The cost of homes and levels of rent found in the San Francisco Bay Area provoke a tremendous amount of discussion but generate little in the way of concrete action. Stanford Professor David Palumbo-Liu emphasizes the class dimension of the issue in a recent article in Salon:

The most extreme case of this vast difference in the ability to afford housing may be that of 1950 Cowper Street in Palo Alto, which recently was bought by Google executive Ruth Porat for the sum of $30 million. That’s right, $30 million. For a three-bedroom house of 5,000 square feet. Contrast this with the massive displacement of ordinary working-class people and the diminishing if not evaporated chances of owning a home for what used to be called “the middle-class family.”

Writing from a leftist perspective, Palumbo-Liu would seek to address the crisis by instituting rent control and other forms of tenant protection. Many other authors, in contrast, emphasize instead the lack of new construction, which in turn stems largely from environmental and quality-of-life opposition to development. As Gabriel Metcalf, writing in CityLab (from The Atlantic), argues in regard to the city/county of San Francisco:

Regardless of these realities, most San Francisco progressives chose to stick with their familiar stance of opposing new development, positioning themselves as defenders of the city’s physical character. Instead of forming a pro-growth coalition with business and labor, most of the San Francisco Left made an enduring alliance with home-owning NIMBYs. It became one of the peculiar features of San Francisco that exclusionary housing politics got labeled “progressive.” … Over the years, these anti-development sentiments were translated into restrictive zoning, the most cumbersome planning and building approval process in the country, and all kinds of laws and rules that make it uniquely difficult, time-consuming, and expensive to add housing in San Francisco.

(See also this article by Conor Friedersdor for a similar perspective.) 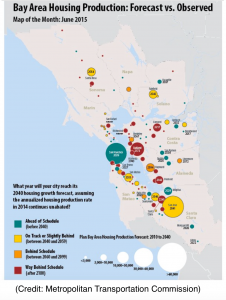 Although Metcalf and Friedersdor focus their discussions on San Francisco, their observations hold just as well—if not better—for the Bay Area’s other cities and towns. Here again we can turn to cartography for clear evidence, thanks to Scott Wiener and his article “Want to Know Why the Bay Area Has a Housing Crisis? Read This Map” (the map in question is from the Metropolitan Transportation Commission, and is posted here to the left). As can be seen, San Francisco is doing much better in reaching its modest housing-construction goals than most other cities in the region. Oakland, which has experienced skyrocketing rents over the past year, is doing much worse, whereas tony San Rafael in ultra-hip Marin County is apparently adding no new housing whatsoever.

Most young people growing up in Silicon Valley and San Francisco will be forced to leave their communities on reaching adulthood, as they will simply not be able to afford local housing. Could this impending “expulsion from home” contribute to the well-known “stress epidemic” that is plaguing Silicon Valley teens? Over the past few years, the small city of Palo Alto—arguably the heart of the Valley—has been in anguish over two spates of suicides at Henry M. Gunn High School. A recent article in The Atlantic, “The Silicon Valley Suicides: Why are so many kids with bright prospects killing themselves,” has riveted—and angered—much of the community. Most analyses of the problem focus on the pressure felt by Gunn students to excel at academics and everything else that they take on—and to take on a lot. Could some of this pressure stem from a simple desire to remain in their home cities, something that demands a high salary at a young age? My daughter, an 11th grader at Henry M. Gunn, gives this idea some credence.