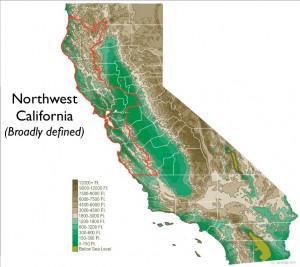 For the next several weeks, GeoCurrents will examine California, particularly the northwestern quarter of the state.  Our interest in California derives from several sources. First, GeoCurrents strives for global coverage, and as a quick glance at the Master Map reveals, North America has received relatively little attention. Second, northern California is the home base of the website, and as such we can delve into certain issues in greater depth than is possible elsewhere. Third, and most important, California—like the Caucasus— exhibits marked linguistic and cultural diversity, and it is also the site of some intriguing geopolitical issues.

The linguistic complexity of California exists in two forms: the first a ghostly aura of vanished and moribund indigenous languages, the second a cosmopolitan imprint of assorted immigrant tongues. Anthropologists have long noted the diversity of the native languages of California, which they divided into at least seven linguistic families. Many linguists, however, now doubt the validity of several of these groupings, arguing that California might have been home to as many as two dozen families, most of them limited to the state. If so, pre-contact California could have rivaled the highlands of New Guinea as the most linguistically intricate place on earth. The research necessary to validate such claims, however, is difficult if not impossible to carry out, as most of these languages are extinct and many were incompletely recorded, if at all.

The disappearance of most Californian languages resulted from the spread of European diseases starting in the late 1700s, followed first by the genocidal campaigns of settlers and the state in the mid-1800s and then by a long period of gradual cultural loss. But not all local languages died out, and conservation and revival efforts are now underway. Except in the northwest, few sizable American Indian reservations were established; instead, survivors largely persisted in urban areas or in tiny “rancherias” scattered over much of the state. Today, the intricacies of residual native sovereignty allow many of these rancherias to prosper as gambling refuges. In many cases, controversies over tribal membership have intensified, as many persons of vaguely indigenous background claim affiliation in order to profit from the casino economy.

Whereas California’s original linguistic diversity was intensively local yet broadly spread across the entire state, that of today is intensely global yet highly focused in particular areas. Over most of California, English is dominant and Spanish secondary, although in one county (Imperial), more people speak Spanish than English at home. In the state’s major metropolitan areas, in contrast, immigrants from numerous countries have introduced a large array of languages. Such diversity reaches its height in the high-tech core of the state—if not of the world. In Northern California’s so-called Silicon Valley, English may dominate public life, but it shares the private sphere with many other languages. At Hoover Elementary School in Palo Alto—where cheap 1950s tract houses sell for well over a million dollars—more than half of all students do not speak English at home. Language instruction in Palo Alto is often controversial, as local activists demand immersion programs in Mandarin Chinese and other languages, provoking strong opposition from other interested parties.

At first glance, geopolitical issues in California appear insignificant, especially when compared with a place as intricately divided and intensely disputed as the Caucasus. But although geopolitical clashes in the state may seem trivial, they illuminate foundational disputes about the structure of the United States. Such disagreements hinge on where the authority of the federal government ends and where that of the constituent states begins, a hoary debate that once went under the name of “states’ rights.” Over time, the U.S. has gradually moved from a fully federal system toward that of a more unitary state; before the Civil War, it was common to regard the country as a plural entity (“The United States are…”). Today such usage seems quaint if not merely illiterate, yet whenever the laws and policies of individual states come into conflict with those of the federal government, states’ rights issues once again gain prominence. 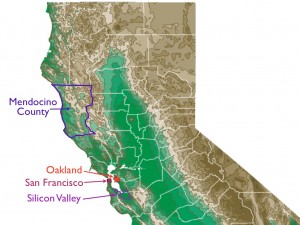 Whereas state’s rights battles in the mid-twentieth century usually focused on racial discrimination in the U.S. South, those of today more often turn to such legal issues as the legalization of marijuana (Cannabis). At present, the U.S. federal government classifies marijuana as a Schedule I drug, which supposedly have no legitimate uses, and as a result the sale and possession of cannabis is banned across the country. California, however, along with a number of other states, allows the consumption of cannabis for medical purposes, which are defined so broadly that virtually any adult can easily obtain a license. As a consequence, medicinal marijuana outlets have proliferated across much of the state.

For several years, the legal environment surrounding cannabis in California remained deeply ambiguous if not simply contradictory. Although proscribed by federal law, medical marijuana dispensaries remained unmolested by federal authorities. President Barak Obama, moreover, had pledged to respect California’s marijuana laws. The situation changed drastically, however, in October 2011, harvest season for the state’s cannabis cultivators. At that time, federal agents began raiding licensed dispensaries and growing cooperatives, threatening the owners of the buildings used for such purposes with real-estate expropriation. Medical marijuana advertisers received similar threats. But after a flurry of activity, calm returned as court cases slowly proceeded. Most marijuana outlets remain open, and Oakland’s “Oaksterdam University”—which provides “quality training for the cannabis industry”—is still thriving. Just last week, the city of Oakland moved to double the number of dispensaries within its boundaries. Oakland, reeling from the costs of the disruptive “occupy Wall Street/Oakland” movement, desperately wants the tax revenues that come from marijuana shops.

As the Oakland example shows, the cannabis dispute involves local jurisdictions alongside state and federal authorities. In several cases, slippage along the different levels of government generates heightened ambiguity. Nowhere are such issues as intensive as in Mendocino County, located in California’s northern coastal region. Like the Bekaa Valley of Lebanon, Mendocino relies on the cannabis crop. Marijuana is so central to the local economy that the county initiated its own licensing system in early 2011. In exchange for hefty county fees and periodic inspections, cultivators would be allowed to grow up to 99 plants, a sum that can easily net half a million dollars. Such a program, needless to say, contravened both federal and state laws. The experiment did not last long. In early 2012, higher authorities arrived in the county to shut it down, much to the consternation of the local public.

Over the next several weeks, GeoCurrents will dig into these issues and more, as we explore the diversity and intricacy of northern California.