The previous post noted that opposition to urban intensification has negative economic as well as environmental repercussions. Such consequences, are experienced in and around all of the thriving cities of the United States, but nowhere more than in the San Francisco Bay Area. Here, the economic and technological marvel of Silicon Valley is fettered by outrageous housing costs that are driven by a combination of thriving companies and suffocating development restrictions. Such local restraints have much broader consequences. The California economy, like that of the U.S. at large, is anemic at best, in good part because the housing sector lags. Yet it could be surging, at least in Silicon Valley. Although housing demand collapsed in 2008 on the exurban fringe, it has remained strong in the core Bay Area. Green developments of the type imagined by such visionaries as James S. Russell would sell very well in this ecologically aware area, compounding economic gains with ecological benefits. The anti-urbanization movement is thus both hindering economic recovery and thwarting the transition to a low-carbon future. 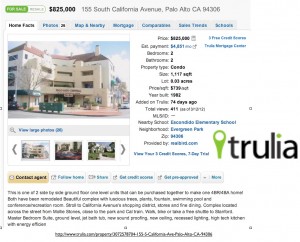 In the heart of Silicon Valley, the real estate market remained healthy throughout the recent recession. Palo Alto experienced nothing but a lull in the ever-upward progression of prices. The figures are again surging. A back-cover map on the March 9th Palo Alto Weekly shows the change in value of housing sales between 2010 and 2011 in several local neighborhoods, and all are sharply up. Prices, notably, have increased not just for single-family homes, but also for the few high-density units that actually exist. A 1,117 square-foot (105 square meters) condo in a non-descript building in Palo Alto’s subsidiary business district is now on the market for $825,000.

Silicon Valley presents many opportunities for educated and entrepreneurial people, and it continues to generate high-quality jobs. Job seekers are attracted by the entrepreneurial culture as well as the natural and cultural amenities of the area. But even those who land well-paying tech jobs usually face a housing nightmare. Shortages often force long commutes over clogged freeways, reducing the appeal of the region. Teachers and other workers of modest salary face greater obstacles. Many tire of their daily ordeals and eventually move to places where purchasing a home is possible. Palo Alto’s anti-urbanists are well aware of this dilemma, but their characteristic response is ineffectual: reserving a set numbers of units in the token high-density complexes that are allowed for below-market sales to those with moderate incomes. Such a policy may be symbolically potent and guilt assuaging, but it does almost nothing to solve the underlying problem of inadequate housing.

Silicon Valley housing costs place a major burden on local employers. Stanford University would hardly be ably to recruit faculty but for the fact that it is so richly endowed that it can provide huge subsidies, including sizable zero-percent loans. Private firms have to pay significantly higher salaries than competitors located elsewhere to attract talent. And even with pay bumps, those recruited to firms like Google must often settle for small quarters and long commutes. Many come nonetheless, but others decline, shocked by the staggeringly high cost of living. As a result, the nation’s premier innovation center finds itself hampered, its own potential pulled down by its artificially mandated housing dearth. 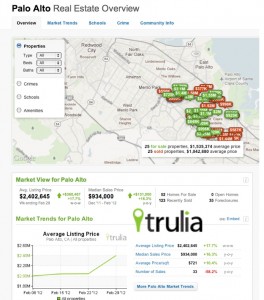 In the mystique of Silicon Valley, the tiny start-up that turns into a huge company looms large. One of the most prominent historical landmarks in Palo Alto is the modest garage where William Hewlett and Dave Packard started their company, Hewlett-Packard, in the 1930s. Many current Stanford students would like nothing more than to follow in their footsteps—and many have the ability. That path, however, is closing down. A few of the best can secure the backing of venture capitalists and begin with adequate funds, but most either have to abandon their dreams or move elsewhere. Certainly the idea of starting a company in a garage in Palo Alto today is laughable, as the city would never allow it. Palo Alto watches over its residents’ use of their property assiduously. Zoning violations are policed with vigor, and the infamous “Palo Alto process” means that even minor changes to an existing building require months, sometimes years, of wading through intense bureaucratic thickets.

The obvious solution to this bind is urban intensification, focused on high-density housing in existing downtowns and along public transit routes. An adequate response would entail large-scale construction. At present, a new apartment complex with fourteen units in central Palo Alto is considered inordinately ambitious, but what is actually needed are projects of 140 or even 1400 units. If convenience-oriented, pseudo-environmental objections and demands could be eliminated, such developments could go up quickly and at reasonable costs, relieving rents, freeing workers from horrific commutes, and allowing ambitious and highly skilled young people to remain in the area. The gains would be manifold.

Critics will no doubt contend that few Americans really want to live in high-density housing. The American ideal, they would remind us, is based on owning a detached, single-family house with a yard. Many residents of this country do prefer such a lifestyle, but it has simply become unaffordable for most in the Bay Area and similar economic hubs. Many people foreclosed from the exurban fringe have soured on the whole idea, and are rethinking the distant-commuter existence. Others were never enthralled with suburbia in the first place, but were forced into it by the inordinate expense of safe, pedestrian-focused urban cores. It is not coincidental that both New York and San Francisco have imposed rent control for years, as demand has long outstripped supply in their livable neighborhoods. Permitting existing city cores to expand and allowing the urbanization of suburban downtowns would help balance the equation, letting more people live where they want and where economic opportunities beckon.

An urban intensification program in Silicon Valley would unleash hidden benefits as well, due to inherent economies of agglomeration. Close physical connections facilitate the exchange of both objects and ideas, giving an economic edge to tightly packed areas. Transportation in such circumstances obviously is much less expensive than in dispersed areas. Direct, person-to-person communication is also invaluable for the generation and development of ideas, the ultimate foundation of the information economy. Although Silicon Valley has pioneered the creation of distant connections and far-flung on-line communities, it relies itself on face-time—which is one of the reasons why competitors in less expensive high-tech centers lag behind. The agglomeration effects of Silicon Valley, in other words, are profound, but are also profoundly constrained.

Ironies abound. While Silicon Valley is awash with cash—Apple is currently sitting on $100 billion, wondering what to do with it—California is an economic wreck, retreating on education, shuttering its beloved state parks, and letting its infrastructure collapse. The state needs sustained economic growth—which it could easily realize, but for the concerted opposition of its new gentry class, concerned above all with its own convenience and sense of exclusivity. That class, of course, was itself created by the gushing trough of local high-tech capitalism. Ultimately, the same group that built Silicon Valley is now strangling it due to its desire to maintain its own privilege.

I am reminded of the Polish-Lithuanian aristocracy in the 18th century, so proud of its freedom and so ready to use its veto power that it prevented the modernization of the state, thus dooming the entire country to partition by Russia, Prussia, and Austria.