One of the main take-home messages of the 2022 U.S. election is that individual states matter a great deal. The Republicans gained control of the U.S. House of Representatives largely because they did well in New York, a distinctly blue state, and in Florida, a formerly purple state that is now firmly in the red category. The Democrats, on the other hand, performed well in Pennsylvania and Michigan, both in national and state contests. Other states showed less pronounced movement in either direction. Arizona, in contrast, came in with highly mixed results, offering disappointment for Democrats and Republicans alike.

Arizona was once one of the most reliably Republican states in the union. It was the only state outside of the Deep South to support Barry Goldwater, a native son, in the pivotal 1964 election. Although it voted for Bill Clinton in 1996, it did not opt again for a Democratic presidential candidate until 2020. In that year, Arizona had the country’s closest electoral margin, with Biden receiving 49.36% of the vote and Trump 49.06%. Arizona can now be considered a deep-purple swing state. It also has a reputation for supporting maverick candidates, whether Democrat or Republican. In the recent part, Republican Senator John McCain often irritated other members of his party, as does Democratic SenatorKyrsten Sinema currently.

In Arizona’s 2020 gubernatorial election, Republicans had high hopes for their candidate, Kari Lake. Lake, a former television newscaster, is very comfortable in front of the camera and was widely regarded by Republican pundits as an ideal and charismatic candidate – a “MAGA star” according to some. In contrast, her Democratic opponent, Katie Hobbs, refused to debate and did relatively little campaigning as the polls tightened and the election approached. In the end, Hobbs eked out a narrow victory, which Lake has been reluctant to accept. In the Arizona U.S. Senate contest, Democratic candidate Mark Kelly more handily defeated his Republican opponent, Blake Masters, winning by roughly 5 percentage points. In these high-profile contests, the Democrats were clearly victorious. 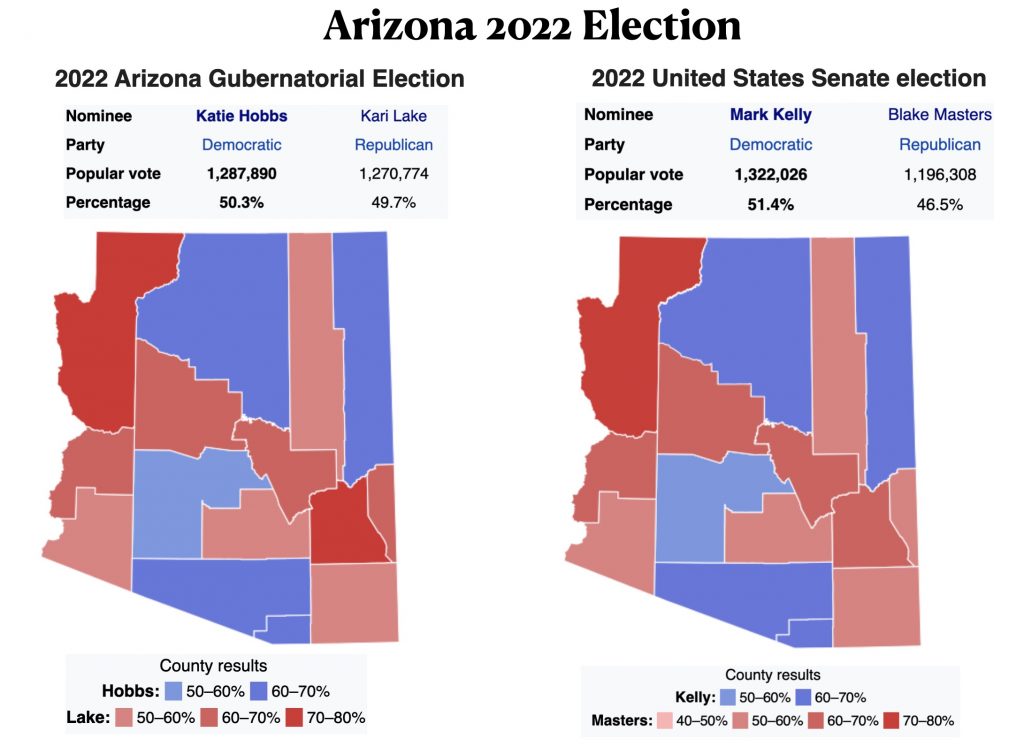 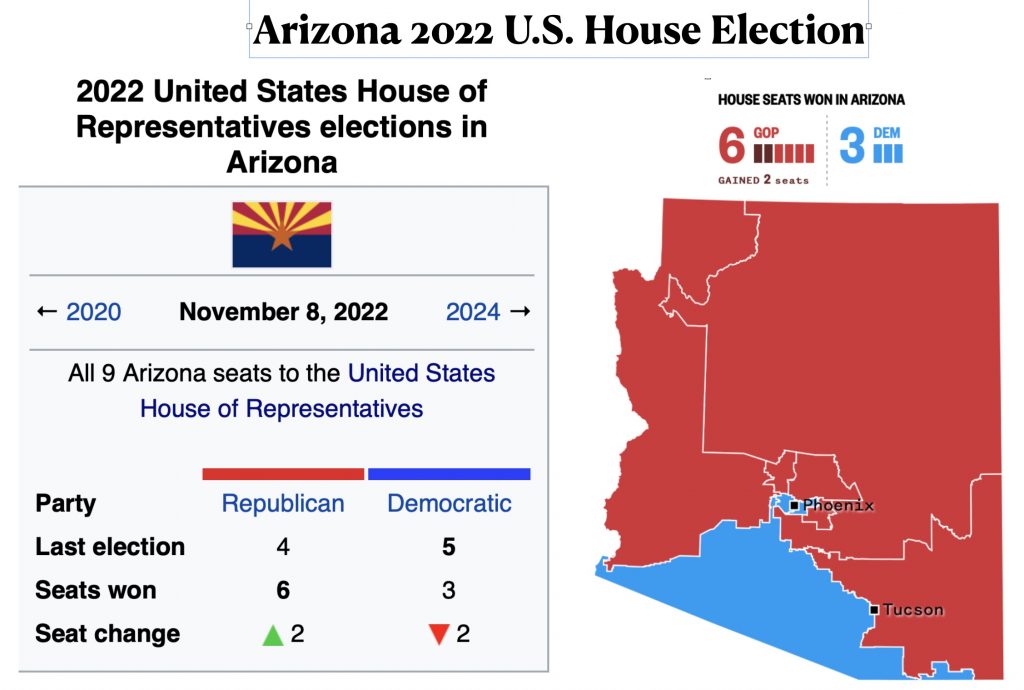 The Republicans’ success in the Arizona House races, in contrast to their failure in the gubernatorial and senate elections, seems to be linked to the nature of the individual candidates. Both Kari Lake and Blake Masters are strong Trump supporters who questioned the legitimacy of the 2020 presidential election. Lake also pointedly rejected the support of Republicans affiliated with John McCain, insulting his legacy. This may not have been a wise strategy. Four days before the election, she told an audience of her supporters:

“We don’t have any McCain Republicans in here, do we?” Lake asked from a campaign stage. “Alright, get the hell out,” she said, before adding, “Boy, Arizona has delivered some losers, haven’t they?”

Senate candidate Blake Masters, for his part, is widely regarded as a hard-core American nationalist who has also opposed U.S. aid to Ukraine. Perhaps more harmful to his image, he is seen as a protege of the controversial tech tycoon Peter Thiel. Thiel’s advocacy of such causes as transhumanism does not endear him to traditional conservatives.

Donald Trump strongly lent his support to Lake and Masters. But he also endorsed two successful Arizona U.S. House candidates, David Schweikert and Eli Crane. Schweikert, however, won by an extraordinarily thin margin, even though his district had been rated as “safe Republican” by 538. Crane won easily, but his victory can be attributed in part to a redistricting process that created a safe Republican seat. 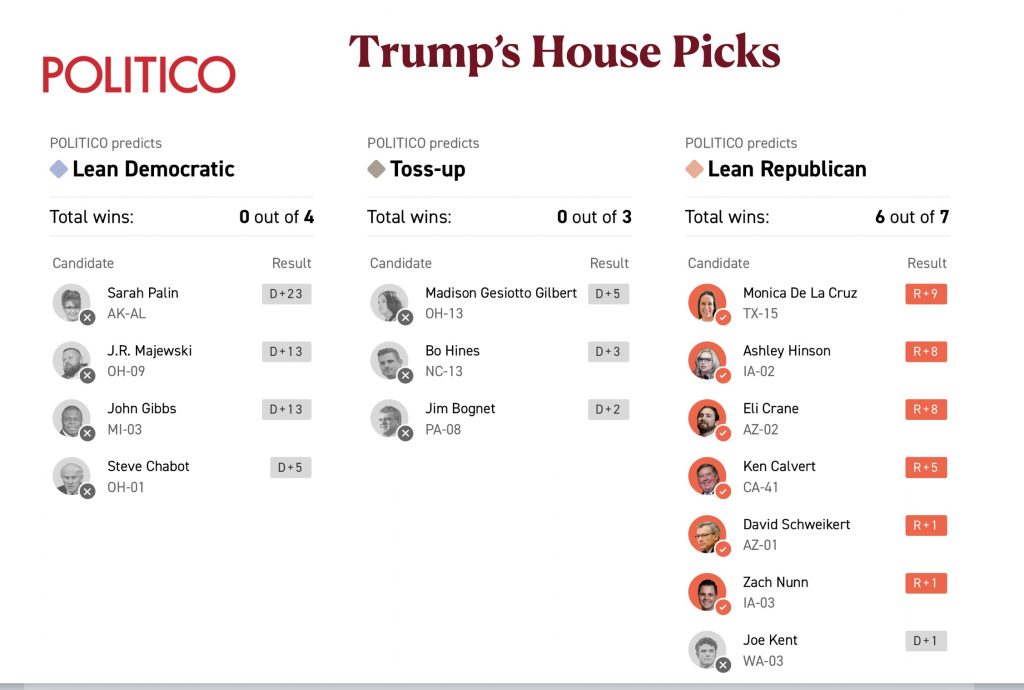 As we shall see in the next GeoCurrents post, Trump-endorsed candidates also performed poorly in Michigan and Pennsylvania. These two states had moved from the “blue” to the “purple” category in recent election, but both now seem to be trending back in the Democratic direction.