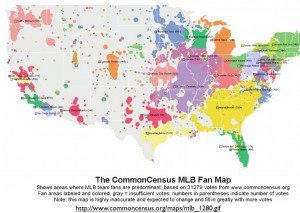 It is not often that I would go out of my way to praise a map that advertises itself as “highly inaccurate,” but I will do so in the case of the Common Census Major League Baseball Fan map. The map was constructed from crowd-sourced data, relying on responders to specify where they live and what team they support. Unfortunately, the response-base was not adequate to generate an accurate map. The map that was produced, however, is suggestive, and the technique is promising. As far as northern California is concerned, I find it highly unlikely that Sonoma County, located north of San Francisco, would support the Oakland Athletics more than the San Francisco Giants. In my experience, Giants territory extends north of San Francisco, through Sonoma and Mendocino counties. The map’s portrayal of areas without MLB teams, such as Utah, is intriguing.