“The TBA is a lawless area of illicit activities that generate billions of dollars annually in money laundering, arms and drug trafficking, counterfeiting, document falsification, and piracy. The TBA offers terrorists potential financing; access to illegal weapons and advanced technologies; easy movement and concealment; and a sympathetic population from which to recruit new members and spread global messages.” 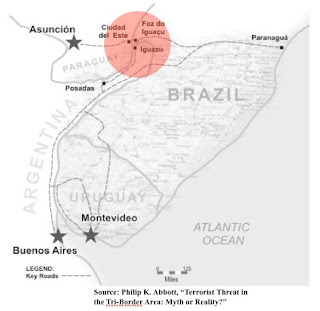 The “TBA” referred to in the passage above is the Tri-Border Area, also known as the Triple Frontier (La Triple Frontera; Tríplice Fronteira), the zone where Paraguay, Brazil, and Argentina meet. Here a single metropolitan area of half a million is formed by three cities, Ciudad del Este in Paraguay, Puerto Iguazú in Argentina, and Foz do Iguaçu in Brazil. The Triple Frontier’s unpleasant reputation derives in part from the legacy of Paraguayan smuggling and the accidents of political geography; from the single city of Ciudad del Este, Paraguayan black marketers can reach into both of their major markets, Brazil and Argentina. Business, licit and illicit, is also aided by Ciudad del Este’s status as a tax-free commerce zone, one of the largest in the world. The city accounts for a disproportionate share of the Paraguayan economy – according to the Wikipedia, an unbelievable 60 percent. More credible is the allegation of the U.S. government that Ciudad del Este’s 55 banks launder $6 billion a year, “an amount equivalent to 50 percent of the official gross domestic product of Paraguay.”

The Triple Frontier’s reputation for terrorism does not merely derive from its smuggling-based economy. The zone has a large population of Arabic background, some 20,000 to 30,000 strong, mostly Lebanese. Although many Latin American Lebanese are Christian, the majority in the Triple Frontier are Muslim. The United States Treasury, among other organizations, has contended that the Muslim community of the region has helped finance Islamist groups, including Islamic Jihad, Hezbollah, and Al Qaeda. The Lebanese diaspora has created a massive, globe-spanning network of retail businesses that is reputed to funnel money into extremist organizations through such poorly regulated commercial centers such as Paraguay’s Ciudad del Este.

Such allegations are controversial, especially within the region. Critics contend that no solid evidence has been offered for Al Qaeda involvement, claiming that this is a case of regional demographic profiling. Connections with the Lebanese Shiite militia Hezbollah, however, are better substantiated. A 1992 bombing outside the Israeli embassy in Buenos Aires was traced by Argentine officials to Hezbollah agents operating from the zone. The region’s on-going connections with the Lebanese militia seem to be largely financial. In February 2010, three Miami-based businessmen were indicted in a U.S. court for smuggling electronic goods to a Paraguayan firm reputed to be operated by Hezbollah. In 2006, with U.S. assistance, Argentina, Brazil, and Paraguay established a joint intelligence center to monitor such activity in the Triple Frontier area.

The unsavory reputation of La Triple Frontera is not appreciated locally, as was made abundantly clear in May 2010 when Kathryn Bigelow began preparing to shoot a film in the region. Bigelow, noted for her award-winning “The Hurt Locker,” hopes to depict the drama of the troubled border zone, but infuriated local officials are refusing cooperation. As the BBC reported: “‘We were indignant when we discovered that this project seeks to portray a region shared by three South American countries in a negative light,’” said the Argentine tourism secretary, Enrique Meyer. ‘They want to tarnish us as the bad guys of the world,” his Paraguayan counterpart Liz Cramer said.’”