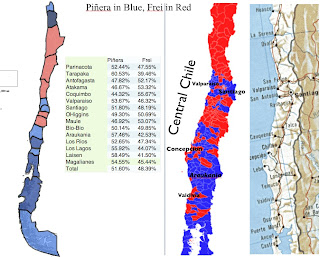 As last Friday’s post noted, recent elections in Chile and Bolivia produced markedly different results. In Bolivia, socialist president Evo Morales was reelected in a landslide, whereas in Chile the center-left coalition that had run the country for more than two decades lost power to the center-right. Although Chile’s out-going president Michelle Bachelet remained extremely popular, her coalition’s candidate, Eduardo Frei, was widely viewed as uninspiring. The center-right’s candidate, Sebastián Piñera, gained votes by promising to return to the rapid economic growth rates that had characterized Chile in the 1980s and 1990s while retaining the social measures put in place by his immediate predecessors.

As the electoral map shows, Frei did well in the major mining regions of the north (Antofagasta and Atacama) and in the agricultural heartland to the south of Santiago (O’Higgins and Maule). Frei also did well in some urban areas, including Concepcion, Valdivia, and parts of Santiago (although not in Valparaiso). Piñera, however, won the metropolitan areas overall, as well as the entire south. He did particularly well in the extreme north, in the Mapuche Indian heartland of Araucanía, and in Aisén, where governmental hydroelectric plans are unpopular. The center-right’s victory in Araucanía is noteworthy, as conservative political parties rarely do well in heavily indigenous areas. The Mapuche, however, have been struggling with non-Mapuche residents of their region over forestry and land-rights issues, leading to high levels of political polarization.

What is most striking about the recent Chilean election is not which candidate won in which region, but rather the fact that the vote was so evenly balanced. In the map on the left, I designated darker shades to indicate regions in which one of the candidates received more than 55 and more than 60 percent of the vote. Just three regions fell into the former category, and only one in the latter. In most of Chile, the margin of victory was relatively slight.

Democratic countries in which national unity is challenged by regional or ethnic identity typically show geographically distinctive voting patterns. Bolivia with its southwest-east divide is one such country: Ukraine, divided east to west, is another. We have also seen how the Hungarian-populated districts in Romania overwhelmingly vote for Hungarian political parties. In more firmly united countries, regional voting differences are much less pronounced. By this criterion, Chile shows high levels of national coherence. Such cohesion was also demonstrated in 2006, when Bachelet bested Piñera in every region except Araucanía, but exceeded 6o percent only in Atacama and Antofogasta.