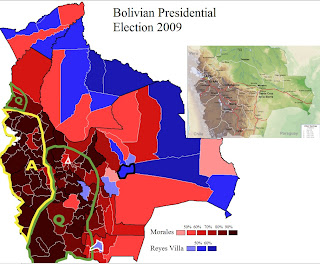 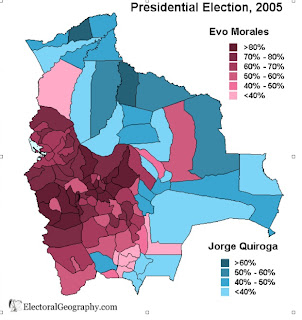 Latin American electoral politics have been trending to the left in recent years. Although Chile just confounded that tendency by voting in a center-right president, Bolivia overwhelmingly reelected its socialist president, Evo Morales, in December 2009. Morales, the champion of Bolivia’s indigenous majority, received 64 percent of the national vote, while his main challenger, Manfred Reyes Villa, received only 36 percent.

As the map shows, Morales trounced Reyes Villa in the southwestern highlands, Bolivia’s traditional center of population and political power, and the main seat of its indigenous population. An Aymara Indian, Morales won more than 90 percent of the vote in most of the Aymara speaking region (marked with a yellow “A” on the map), and did almost as well in the Quechua-speaking zone (marked with a green “Q”). The only highland province to vote for Reyes Villa was Oropeza, home to the country’s constitutional capital of Sucre, a largely Spanish-speaking city. Reyes Villa did reasonable well in Tomás Frías province, where the city of Potosí is located, and in his hometown of Cochabama (marked with a white triangle), although he lost in both places (for the voting base maps, see http://www.electoralgeography.com/new/en/; linguistic divisions based on the Ethnologue map of Bolivia).

As expected, Reyes Villa won a much higher percentage of the vote in the lowlands of eastern Bolivia, where most people are of mestizo rather than indigenous background, and where agriculture is oriented toward commerce more than subsistence. Yet as the map shows, here too many provinces went for Morales, if narrowly. Reyes Villa did win a convincing victory in the city of Santa Cruz (outlined in black on the map), the lowland’s commercial center and major metropolis. He did even better along the eastern border, where economic interests look more to Brazil than to the rest on Bolivia. The city of Tarija in the south, center of Bolivia’s recently nationalized natural gas industry, also gave Reyes Villa the majority of its votes.

Bolivia has undergone a major political transformation in recent decades as democracy has become more fully entrenched and as power has shifted from the traditional elite to the indigenous majority. Such a transformation has generated substantial geographical divisions in Bolivian politics. Several years ago, as Morales rose to power, a major movement for autonomy gained strength in the eastern lowlands. But as the 2005 election map shows, the regional division in voting behavior was far more pronounced then than it was four years later in 2009. Calls for eastern separation are less pronounced now, as Morales’s popularity has grown in the east. In the urban highlands outside the Aymara zone, meanwhile, Morales has lost some of his support. As the regional political divide has lessened, the urban-rural divide seems to have grown.