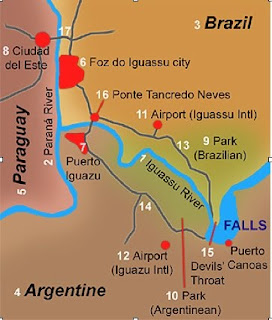 The uproar over Kathryn Bigelow’s plans to shoot a film in the Triple Frontier region (discussed yesterday) might seem surprising at first glance. Ciudad del Este and the tri-border zone are already known in Brazil, Argentina, and Paraguay for smuggling and crime, and are thus unlikely to suffer much domestically from American movie insults. Potential international tourists dissuadable by a grim film might seem too few to worry about; the Triple Border cities have scant attractions beyond the cheap electronics and cigarettes of Ciudad del Este. But the larger region does have one tourist draw of tremendous significance: Iguazu Falls (see photo). If the Triple Frontier gains notoriety as the result of a hit film by an acclaimed director, tourism revenues could drop.

Although by no means the highest drop, Iguazu is often ranked as the world’s most spectacular waterfall. Iguazu outranks Niagara, its nearest competitor, in two respects: it is higher (82 meters vs. 51) and wider (2,700 meters vs. 1,200). Since the Iguazu River has a more variable discharge than the Niagara, it also carries more water during peak seasons. And visitors can experience Iguazu more directly than they can Niagara. Iguazu’s intricate shape, along with its well-developed system of walkways, allows visitors to be enclosed by 260 degrees of plunging water.

Fifty-five years ago, Niagara and Iguazu ranked only third and fourth by flow rate,* but the world’s two biggest waterfalls have since gone extinct. The second largest, by a wide margin, was Celilo on the Columbia River between Oregon and Washington. Celilo’s drop was only seven meters – low enough for salmon to jump over – but it was still an impressive sight. The Dalles Dam, finished in 1957, inundated the falls, and in doing so evidently drowned the longest continually inhabited site in North America. Celilo Falls had been a premier salmon fishing location, with permanent settlements dating back some 15,000 years.

While Celilo was massive, it was dwarfed by Guaíra Falls on the Paraná River coursing between Brazil and Paraguay. Guaíra was the waterfalls of waterfalls, with seven distinct drops, the highest of which plunged 40 meters. The roar could be heard 20 miles away. But in the early 1980s, Guaíra disappeared behind Itaipu Dam. Just before that, its national park was disestablished and its rock faces were blasted away, due to fears that they might impede navigation during low water periods. Guaíra, unlike Celilo, is beyond resurrection.

Itaipu Dam itself is an impressive structure, deemed by the American Society of Civil Engineers one of the “seven modern wonders of the world.” Until the completion of China’s Three Gorges Dam, it was the largest hydroelectric power plant in the world, generating 19 percent of Brazil’s electrical power and 90 percent of Paraguay’s. In 1989, Philip Glass composed a symphonic cantata in honor of the dam, appropriately named “Itaipu.” (Glass’s symphony is not the only musical homage to a hydroelectric facility. Woody Guthrie, of all people, recorded another: “Well the world has seven wonders, the travelers always tell / Some gardens and some towers, I guess you know them well / But the greatest wonder is in Uncle Sam’s fair land / It’s that King Columbia River and the big Grand Coulee Dam.”)

Itaipu’s electricity is currently an item of contention between Paraguay and Brazil. Paraguay sells the bulk of its share to Brazil. Most Paraguayans think that the power is underpriced, owing to the cozy relations between their country’s historically dominant Colorado Party and the Brazilian government. Fernando Lugo won the presidency of Paraguay in 2008 in part by campaigning on a platform of “energy sovereignty.” Paraguay wants its annual compensation to increase from $120 million to $360 million. Brazilian president Lula da Silva agreed to the hike in 2009, but the deal is currently stalled in the Brazilian congress. Brazil’s business community is not pleased by the prospect, arguing that it “would have an impact on energy costs and consumers’ pockets.”

*Sometimes the cataracts on the Congo River are counted as the world’s largest waterfalls, but these are more properly classified as rapids.