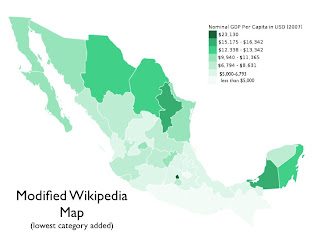 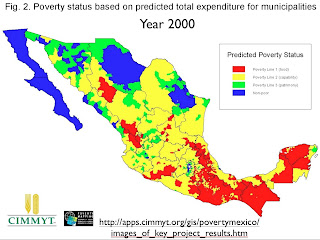 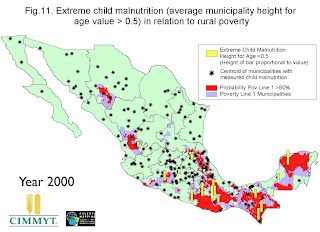 On the global scale, Mexico is a middle-income country, a fact lost on most Americans. According to the IMF, it ranks 60 out of 184 in per capita Gross Domestic Product. Measured in purchasing power parity (PPP), Mexico produces roughly $13,600* worth of goods and services per person per year, a figure comparable to those of Malaysia, Lebanon, and Turkey. While substantially lower than that of the United States ($46,300), much less than those of Luxembourg ($78,300) or Qatar ($83,800), Mexico’s per person output towers over those of truly destitute countries, such as Zimbabwe ($355) or the Democratic Republic of Congo ($332). (Per capita GDP, as discussed previously in Geocurrents, is a vexed measurement of wealth and poverty, but it does give a general sense of economic development.)

Mexico’s economic output varies substantially from one region to another. The country’s wealthiest subdivision, the Federal District, produces more than six times the value of goods and services per capita as the poorest state, Chiapas. The basic geographical pattern is one of relative prosperity in much of the core area of Mexico City and through most of the north, coupled with much lower levels of economic activity in the south, particularly in the states of Chiapas, Oaxaca, and Guerrero. But even Mexico’s poorest states are relatively well off when compared with nearby countries further to the south; the per capita GDP of Chiapas is more than three times larger than that of Nicaragua. Overall, Mexico’s economic figures are comparable to those of Central and Eastern Europe, as is evident in the chart posted just below (the chart takes a sampling of Mexican states, ranging from the richest to the poorest, and pairs them with European countries of roughly equal output). 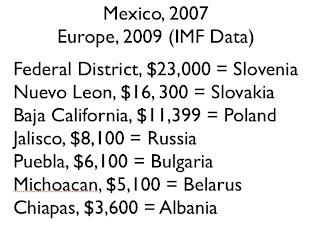 Relatively high per capita GDP can coexist with widespread poverty if income distribution is highly skewed or if profits are monopolized by groups from outside of the region. Such a disconnection between per capita GDP and basic economic wellbeing is especially notable in two Mexican states, Quintana Roo and Campeche, both located on the Yucatan Peninsula. These states have an elevated rank in regard to both economic production and, as is evident in the 2000 CIMMYT maps posted above, deprivation. The explanation seems to lie in the states’ particular patterns of economic development. Quintana Roo has profited massively from the mega resorts of the Cancun area, but the fruits of such development had not spread widely by the year 2000. The same seems to be true in regard to the profits flowing from the oil industry of Campeche. It would be interesting to see the extent of poverty reduction in these two states over the past ten years.

Because Mexico is so much more prosperous than its southern neighbors, it attracts large numbers of Central American immigrants, most of them arriving illegally. As a 2008 WorldFocus article reported, “According to Mexico’s National Institute of Migration, 2 million documented and undocumented cross Mexico’s southern border a year. The majority of these undocumented immigrants are Guatemaltecos, followed by Hondurans, Salvadorians, and … Nicaraguans.” Many of these immigrants are ultimately headed to the United States, but a substantial number seek work in Mexico, much closer to home. Mexico has often treated its own undocumented workers harshly. In late June 2010, the Mexican government announced a new program, dubbed “Summer 2010,” designed to increase patrols along both its northern and southern boundaries, but also to provide humanitarian assistance for would-be border-jumpers. According to a recent article, “during this special summer operation, immigration officials will try to dissuade migrants from continuing their journey, insofar as they will be exposed to dehydration due to long walks in temperatures of more than 40 degrees Celsius [104 °F].

*In nominal terms (measured in currency equivalents rather than purchasing power), Mexico’s per capita GDP is only about $8,100, but it still ranks 61 out of 181 countries, Quintana Roo, Campeche