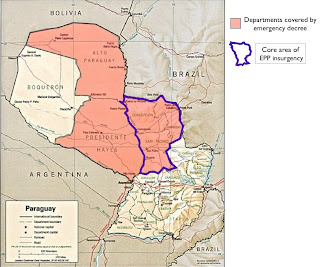 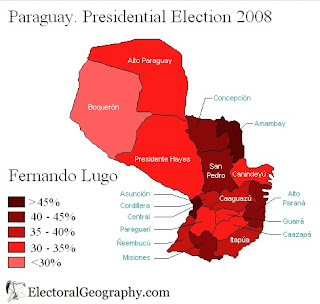 On April 24, 2010, Paraguay’s Congress granted its president emergency powers to combat the Paraguayan Peoples Army (EPP; Ejército del Pueblo Paraguayo). The decree, which covered five of Paraguay’s departments for one month, allowed arrests without warrants and joint police-army raids. Several commentators on the left denounced the move as an over-reaction to a tiny rebellion, as the EPP apparently consists of fewer than 100 fighters. As recently as 2009, some reporters expressed skepticism about its very existence. But EPP kidnappings and other forms violence have been increasing, and new reports link the group to Colombia’s notorious FARC. In April 2010, an EPP ambush killed several police officers, prompting the current crackdown. In the ensuing Operation Py’a Guapy (“tranquility” in Guarani), 3,300 armed men were deployed against the rebel forces.

In several respects, the insurgency follows a typical Latin American script. The Marxist-Leninist EEP idolizes Che Guevara and seeks to replace the government of Paraguay with a revolutionary regime. It finds support in an impoverished region where landless campesinos struggle against large land owners who, according to one recent report, “regularly hire death squads to kill peasants.” Trained EPP fighters, including women, are well equipped. They finance their operations through kidnapping and the drug trade, and perhaps through their connections with other insurgent organizations. As is true of several other Latin American far-left groups, the EPP melds Marxism with the so-called liberation theology advocated by leftist Catholics in the 1960s and ‘70s. According to one report, the group’s origins can be traced to 1992, “when some trainee priests were thrown out of the seminary for their radical views.”

The timing of the EPP insurgency is telling. In 2008, as the group intensified its attacks, Paraguay put an end to its long heritage of authoritarian, one-party rule, electing leftist Fernando Lugo to its presidency. A former priest of the liberation theology school, Lugo shared a platform with Venezuelan leader Hugo Chavez soon after becoming president. (At the time Chavez announced, “For the first time, I feel wanted in Paraguay.”) Upon assuming office, Lugo renounced his own presidential salary, claiming that it belonged to the people of Paraguay. Lugo’s campaign, moreover, did especially well in the poor northeast, the EPP’s stronghold (see maps).

Why did the EPP ramp up its attacks precisely when a leftist came to power? For the extreme left, Lugo has been a major disappointment. Although he has made friendly gestures to Hugo Chavez, he has refused to join the Venezuelan-led “Bolivarian Alliance for the Americas.” Instead, he has sought good relations with all of Paraguay’s neighbors – and with the United States. As Lugo was elected with less than 50 percent of the vote, and as his party does not control the Paraguayan Congress, he has not been able to pursue radical change. As a result, he was not given a chance by the extreme left; almost as soon as Lugo assumed the presidency in 2008, EPP leaders announced that they would begin “massive land occupations with violence,” because the government of Fernando Lugo “will not enact comprehensive agrarian reform.”

The political situation in Paraguay is interesting and troubling, meriting more attention than it has received. The country’s transition from a hard-core authoritarian state to a multi-party democracy is significant and little noted. The surge of EPP violence, however, shows that a democratic transition, even when it brings in a leftist government, will not necessarily forestall revolutionary forces. With drug money added to the mix, Paraguay may experience more troubled times in the months to come. Lugo now fears that the Paraguayan military will put a premature end to his presidency, warning fellow South American leaders that he faces a coup threat. Lugo has also endured some revealing personal scandals, as we shall see tomorrow.