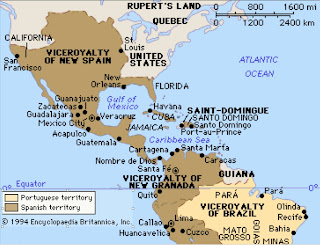 Many maps are misleading, but few are as consistently deceptive as the basic historical-political maps that fill the pages of most historical atlases. Such maps usually portray the polities of past, whether smallish kingdoms or vast empires, as if they were clearly bounded entities that exercised full control over their territorial domains. In actuality, most states have had vague boundaries, and many have maintained only partial control even in their core regions. As Lauren Benton argues in her important new book,A Search for Sovereignty: Law and Geography in European Empires, 1400-1900, “Empire did not cover space evenly but composed a fabric that was full of holes, stitched together out of pieces, a tangle of strings” (p. 2). The end results, she contends, were “not at all consistent with the image produced by monochrome shading of imperial maps” (p. 2).

Among the most misleading maps of empire are those that purport to show Spanish dominion in the Americas. Consider, for example, the Encyclopedia Britannica map reproduced above. Vast expanses of land in central North America are depicted as belonging to Spain, even though most of these lands had never even been visited by Spanish explorers, let alone subjected to actual administration. By placing the label “Viceroyalty of New Spain,” over what is now the center-west of the United States, moreover, the cartographer has effectively marginalized New Spain’s actual core in central Mexico. What the map really shows are not Spain’s territories but its territorial claims, its pretense to power. And even in this regard, the map may mislead by implying that such claims were everywhere of long-standing. In actuality, Spain asserted possession over the western Mississippi basin only between 1763 and 1800. And in regard to California, Spanish authority did not begin to spread until 1769, and it never extended into the northern and eastern reaches of the area that eventually became the American state.

Lauren Benton is by no means the only historian to point out the incompleteness of empire and our misleading cartographic portrayals of the past. But the extent to which such considerations still hold true is less often appreciated. What this blog seeks to demonstrate is the fact that many modern states, “do not cover space evenly, but compose a fabric full of holes, stitched together out of pieces, a tangle of strings.”