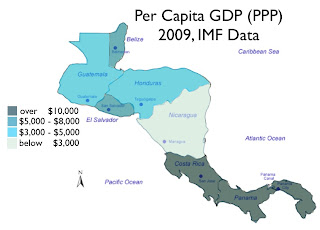 Nicaragua, the poorest country in continental North America by a good margin, sends immigrants not only northward into Mexico and the United States but also southward into Costa Rica. The economic disparity along Nicaragua’s lightly policed southern border is steep and Costa Rica, unlike Nicaragua, is known for its political stability, effective government, and high levels of social well-being. Nicaraguans have been moving south for some time, the flow accelerating with every natural and political disaster at home. Most estimates put the number of people of Nicaraguan origin in Costa Rica at about 10 percent of the total population; roughly half are undocumented.

Costa Ricans tend to disparage “Nicas,” blaming them for crime and stressed social services. In 2005, the mauling death of a suspected Nicaraguan thief by two dogs generated a diplomatic episode. Reports claimed that Costa Rican bystanders, including members of the police, simply watched as the animals ripped the man apart. A few hard-core Costa Rican nationalists defended the attack. The Inter-American Commission on Human Rights report on the incident is worth quoting at length:

“According to the State of Nicaragua, ‘in certain sectors there has arisen a marked climate of verbal violence, intolerance, and xenophobia as is apparent from publications produced by groups interested in stirring up hate and even violence against Nicaraguans in Costa Rica.’ … [I]n the days following the death of Mr. Canda Mairena a number of ‘jokes’ and xenophobic displays appeared on different Internet web sites … An electronic mail message dated November 11, 2005 says, ‘Due to the recent events of bravery and heroism that showed that the dog is the Costa Rican’s best friend (today more than ever), all of the below signed wish to present to the legislative assembly a bill to change the yiguirro [the national bird of Costa Rica] thanks to the heroic dogs Oso and Hunter “Rottweller” (sic), who took the initiative, cast fear aside, and redefined Costa Rican culture and valor against the invasion of the neighbors to the north.’”

In 2006, Costa Rica implemented a stringent immigration reform. As reported in the Los Angeles Times, “Costa Rica’s new immigration law is aimed largely at those who profit from undocumented workers. It makes human trafficking a crime punishable by as much as six years in prison. And it significantly increases fines on Costa Ricans caught employing illegal immigrants — to $3,600 per violation, up from as little as $10…”

Costa Rica’s current immigration news story concerns China rather than Nicaragua. Some 600 Chinese workers recently came to Costa Rica to work on a new national sports stadium, financed by Beijing as a favor for Costa Rica dropping Taiwanese recognition in 2007. As Chinese construction firms subsequently moved on to build an apartment complex in San Jose, the call went out for more Chinese workers. Costa Rica’s Ministry of Labor countered that there are plenty of qualified Costa Ricans who could be employed instead. On June 27, 2010, Costa Rica’s ambassador to Beijing lodged an official protest against Chinese pressure on his country to allow in the additional workers.

Many Costa Ricans are apparently irritated with China. As one commenter put it, “With roughly 1.5 billion people the next thing will be the waters being over-fished and no sharks anywhere to be found, which is already happening anyway. All for a free stadium. … Time to tell them ‘a Dios muchaco’, and apologize to/make friends again with the Taiwanese, who were generous without all of the strings attached.”