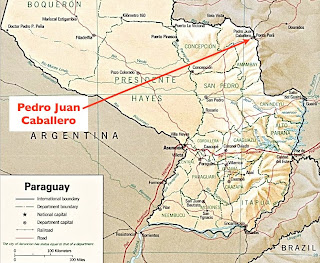 After wondering whether the border outpost was too dangerous for such a meeting, Lula concluded that “…we need to show ourselves here, because honest people outnumber the drug traffickers.” Outnumbered though they may be, the traffickers’ ranks are growing – and growing more violent. An average of eight dead bodies turn up in and around the town each month, prompting comparisons with Ciudad Juarez. Brazilian drug gangs appear to be responsible for the mounting bloodshed. According to one report, “the largest criminal factions in São Paulo … have imported practices not carried out by Paraguayans such as the summary execution of enemies.” In April 2010, gang members shot Paraguayan Senator Roberto Acevedo, who had dared to criticize them, in the arm and face. Acevado survived; his driver and bodyguard did not. 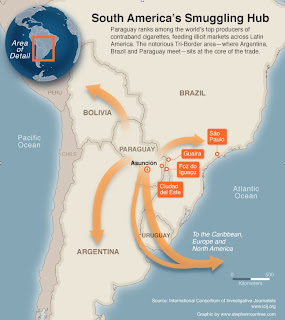 The presidential summit in Pedro Juan Caballero covered severalissues. Paraguay insisted on discussing what it sees as unfavorable electricity contracts from the gargantuan Itaipú dam on the Paraná River. Brazil, for its part, wants president Lugo to pressure the Paraguayan Congress to allow Venezuela’s entry into Mercosur, the South American trade block. But the big topic was crime and its possible links with insurgency. The Paraguayan rebel group EPP is supposedly connected with both FARC, Colombia’s drug running revolutionary army, and the hyper-violent São Paulomafia. The governments of Paraguay and Brazil have much to fear in the specter of a Colombia-style narco-insurgency along their border.

Paraguay became a paraíso de contrabandistas, or smuggler’s paradise, during the long period when it was economically cut off from its neighbors. As a Mercosur member-state, it is now regionally well integrated, but old habits persist. Paraguay also has a relatively weak state apparatus, with a limited capacity for law enforcement. (Lugo wants to raise $37 million through income tax to fight smugglers and the EEP, but the Paraguayan Congress resists.) As a result, the range of smuggled goods is broad. One of the largest sources of illicit profit is contraband cigarettes. Vast quantities are smuggled from Paraguay’s virtually unregulated tobacco factories into Brazil (see map), infuriating Brazilian authorities. Paraguay has long overlooked this trade, but in February 2009, its custom chief coordinated a massive raid. A stunning 46 million cigarettes were confiscated from a single warehouse one block from the Brazilian border.

Globally, the $50 billion-a-year black-market tobacco trade ranks as the world’s tenth largest illicit business. Cocaine ranks fifth, and while Paraguay is not a cocaine producer, it is a transit corridor. An estimated 40 tons of cocaine pass through Paraguay every year, mostly destined for Brazil. Through this trade, Paraguayan armed gangs make connections with their Colombian counterparts.

According to the invaluable website Havocscope, the world’s largest illicit trade—by a $30 billion margin—is marijuana, more valuable than cocaine and opium/heroin combined. Paraguay’s 5,900 annual metric ton harvest* accounts for roughly 15 percent of the global total, making it the country’s top illegal business by a substantial margin. Most Paraguayan marijuana is exported to Brazil, where it accounts for 80 percent of the supply. As is the case in Mexico, the vast profits of the criminalized cannabis market flow into death-dealing criminal networks.

The United States government is concerned about the drug markets of Paraguay. After Evo Morales expelled the U.S. Drug Enforcement Administration from Bolivia in 2008, the DEA transferred 10 of the 56 departing agents to Paraguay. It is doubtful, however, that their actions will prove very successful. Many observers argue that marijuana decriminalization in Brazil would have a much greater chance of success. If every Brazilian were allowed to grow a few plants for personal use and petty trade, Paraguayan and Brazilian narco-terrorists would be deprived of one of their main sources of revenue. Brazilian consumption of cannabis, a drug substantially less harmful than alcohol, would likely increase by a moderate amount, but that would seem a small price to pay.