Coke vs. Pepsi; Venezuela vs. Zulia 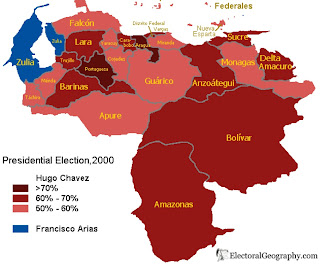 Although Venezuelan president Hugo Chavez has been able to secure relatively high levels of electoral support, his campaigns have faltered in the northwest. In the Andean highland zone, closely linked to neighboring Colombia, the states of Táchira and Mérida both voted “no” on Chavez’s constitutional referendum in 2009. Anti-Chavez sentiments also run strong in the northwestern lowland state of Zulia, which brackets Lake Maracaibo. The heart of Venezuela’s oil industry, Zulia has deep connections with the United States. But even beyond economics, the culture of the Maracaibo region is at odds with that of the rest of the country. 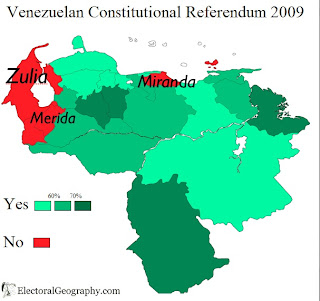 The differences between the Maracuchos—the people of the Maracaibo lowlands—and other Venezuelans are considerable. Maracaibo speech is distinctive in intonation and especially in its use of “vos” for “you.” The region’s folk music—La Gaita Zuliana—is unique, and its coconut-heavy cuisine is unlike that found elsewhere in the country. Behavior differs as well. As Edward Teveris reports, “A question in the survey my company conducted a few years back asked: “Te consideras un ‘parandero’?” (“Do you consider yourself a ‘showoff’?” Meaning: lots of gold watches, necklaces, and other high machista behaviors.) The ‘Maracuchos’ responded at an alarmingly higher rate than the rest of the country. When we showed that slide to our clients they laughed in agreement.”

The Maracuchos seem to have embraced an oppositional culture so pronounced that it is even reflected in consumer choices. Brands that do well in Caracas and elsewhere in the country often fail in Zulia. While most Venezuelan smokers like Belmont cigarettes, the Astor Azul brand is preferred in Maracaibo; while Polar beer is favored elsewhere, regional brews are more popular in Zulia. Perhaps most tellingly, other Venezuelans drink Coca-Cola, but Maracuchos drink Pepsi. (See “A Psychographic Profiling of Venezuelan Consumers and Society,” by Jacobo Riquelme and Edward Teveris).

The same oppositional sensibility is also encountered in politics. It is thus not surprising that in 2008 leaders in Zulia proposed launching a campaign for autonomy, modeling their proposal on efforts made in Bolivia’s Santa Cruz region. Nor is it surprising that such designs met concerted opposition from pro-Chavez forces. As one local representative responded, “we [pro-Chavez government] legislators categorically reject this separatist, secessionist proposal of the state because it goes against our values and the integral development of the country,” adding that “We, with the law, with the People in the street, and with the armed forces, will put up a fight”(from “Autonomy Proposed in State Legislature of Venezuelan Oil State Zulia,” by James Suggett, http://www.venezuelanalysis.com/news/3423).