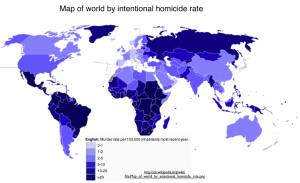 Brazil is noted for its high murder rate. In the Wikipedia map posted here, Brazil falls in the highest homicide category, with more than 20 slayings a year per 100,000 people. This figure significantly exceeds that of the United States (4.8) and vastly exceeds those of such countries as Japan (0.4) and Iceland (0.3).  Yet Brazil is hardly the most murderous country: the current homicide rate of world-leader Honduras is 91.6. 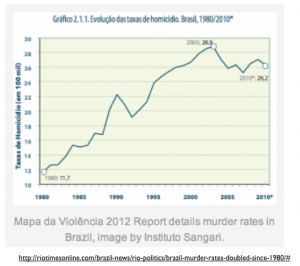 Not surprisingly, murder rates in Brazil vary greatly from region to region and over time. The relatively peaceful southern state of Santa Catarina, for example, has a murder rate of 13, whereas the figure in the northeastern state of Alagoas is over 60. In recent years, the homicide rate in Brazil as a whole has declined slightly, falling from a peak of 28.9 in 2003 to around 21.0 currently. It had previously escalated steadily, more than doubling from 1980 to the turn of the century. Such national figures, however, hide regional patterns. As it turns out, some Brazilian states, such as São Paulo, have seen substantial declines over the past several decades, whereas others have seen major increases. Alagoas was less murder-prone than São Paulo in 1980, yet it is now so violent that it would have the world’s third highest homicide rate if it were independent, exceeded by only Honduras and El Salvador. 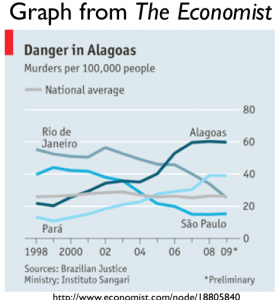 The extraordinarily elevated level of violent crime in Alagoas has garnered the attention of the international new media. As reported in a 2011 article in The Economist:

Alagoas … is a place of sugar and cattle, where the sugarcane cutters settle scores with fists and knives and the well-connected escape punishment by using contract killers instead. Year-round sunshine, beautiful beaches and coral reefs mean tourism offers Alagoas’s best chance of development. But its status as Brazil’s crime capital puts that at risk. State officials are desperate to point out that Alagoans kill each other, not outsiders, and in slums, not beauty spots. Victims and murderers are often indistinguishable: unemployed, illiterate, drug-addicted young men, says Jardel Aderico, the state secretary for peace, whose job title represents an aspiration.

Better policing and economic growth have seen the murder rate fall by nearly two-thirds in São Paulo and two-fifths in Rio over the decade. Criminals squeezed out of long-held strongholds followed the money to areas of new industrial development and tourist destinations. Illegal logging and land grabs, together with new cross-border routes for guns and drugs, stoked crime in the Amazon. And Alagoas, its state government debt-ridden and police force weak, corrupt and often on strike, was at times close to lawless. 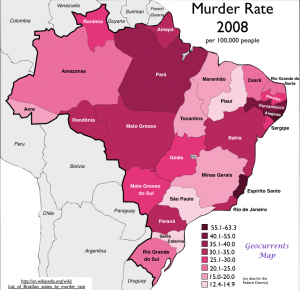 Alagoas is one of the poorest states in Brazil, whereas several of the country’s richest states have relatively low homicide rates, such as Santa Catarina and São Paulo. One might therefore be tempted to correlate murder levels in Brazil with developmental indicators. Yet as a comparison of the murder map with that of the Human Development Index (HDI) shows, any such connection is rather weak. It is true that the developed states of southern Brazil tend to have relatively low homicide rates, and that the state with the most killings (Alagoas) also has the lowest HDI. But beyond that, the correlation breaks down. The least murderous state in Brazil is Piauí, which ranks third from the bottom in HDI. Espírito Santo, on the other hand, has the country’s second highest murder rate, even though its HDI is roughly at the national average. 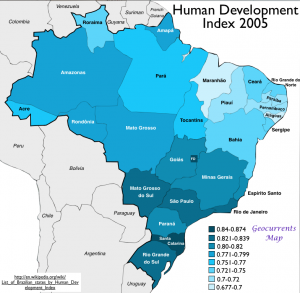 Northeastern Brazil is certainly the poorest and least developed part of the country. It is often viewed by outsiders as a relatively uniform region marked by violence and deprivation. Yet as this exercise shows, great social differences are found across the region. Both Alagoas and Piauí are poor, but the former is much more violent than the latter. A study of this difference would make an interesting project. 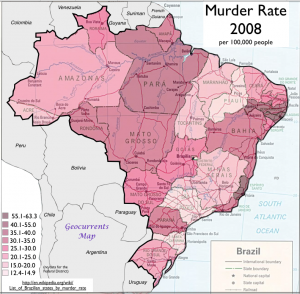 Addendum: After making this map, it occurred to me that it might be useful for readers to be able to see the locations of cities, rivers, railroads, roads, and other geographical features, as well as the murder-rate-by-state pattern. I have therefore done a simple map overlay, and adjusted the transparency settings to 50%. I would be interested to know what readers think of this style of mapping.